Sen. Sanders headlines rally, students eager to get out the vote 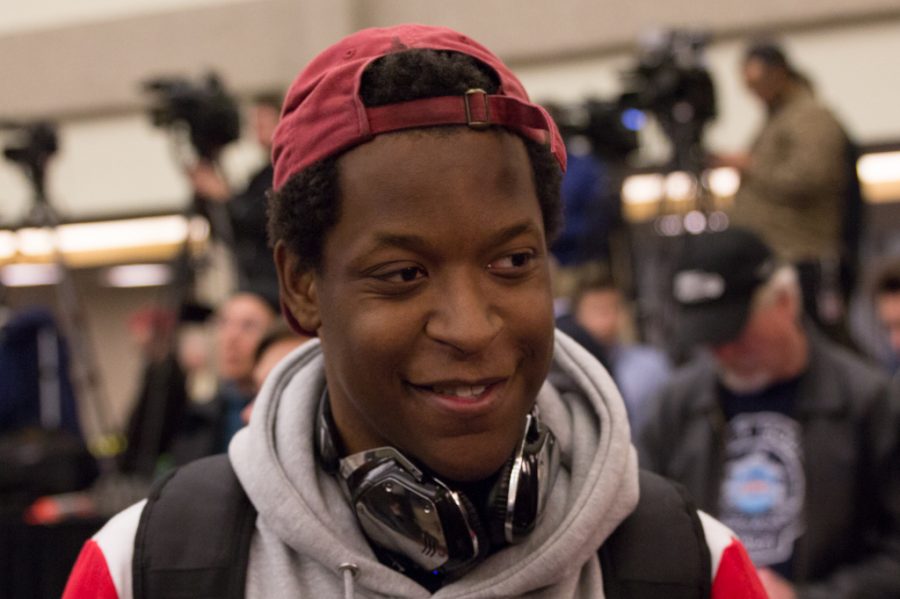 Ben Cleveland, UWM junior, said he is paying attention to climate change and the language the White House uses regarding scientific credibility this election season.

Alyssandra Scaffidi has been waiting in line for one hour to see Independent Sen. Bernie Sanders of Vermont speak on behalf of Wisconsin’s Democratic candidates. The University of Wisconsin-Milwaukee freshman said she is here at the UWM student union because she believes her generation needs to participate in politics.

“All my friends are registered to vote,” she said. “Probably because I kept begging them.”

Scaffidi is not the only student encouraging friends to vote this midterm election. Students from across the state attended the get-out-the-vote rally Monday. The common thread tying many of the students together? They’re registered voters.

Bryce, the Democratic candidate running to fill Paul Ryan’s seat in the state’s first district, challenged the “radical” designation given to him by his opponents.

“I don’t think it’s radical to demand that everybody has access to healthcare,” Bryce said.

Bryce primed the audience for the overall tone of the morning, outlining the policy issues the candidates would cover during the event.

“We have to make Wisconsin a state that prioritizes education, not incarceration,” he said.

Evers, who is running to unseat Gov. Scott Walker, promised a $15 minimum wage, income tax breaks and a Medicaid expansion on his first day in office if he is elected.

At the height of the event was Baldwin, with Sanders as the headliner. Baldwin said that while she has been in office, she has worked to fund education from early childhood to college, to fix Wisconsin’s crumbling roads and to make health care affordable.

“I was not sent to Washington to take people’s healthcare away,” Baldwin said, adding a personal note about her own preexisting condition from childhood and the risk she believes her opponent, Republican candidate Leah Vukmir, poses to protections for people in similar situations.

Sanders called the reason for the event “some very serious business.” He said people have to do more than vote; they have to also encourage those they know to participate in the midterm election.

The crowd nearly filled the event space to capacity, reaching roughly 1,100, according to organizers.

For some attendees, it was their first time hearing Sanders speak, but not for Benjamin Rangel, a second-year international affairs graduate student at Marquette who has heard Sanders speak three times now. He said this event was particularly important because it underscored Wisconsin’s dynamic political history as a swing state.

“(Sanders’) time is valuable,” Rangel said. “It says a lot about how important Wisconsin really is.”

Marco Zacarias, a UWM senior, and Cindy Wotapka, a University of Wisconsin-Parkside sophomore, were also among students in attendance.

“I think more people are taking voting seriously,” Zacarias said. “Especially people who don’t have a personal stake but want things to be better for everyone else.”

Wotapka calls her generation the least politically active, but she said social media has been helpful in exciting more first- and second-time voters, and she said because of that, most of her friends are registered to vote.

Nate Tollenaar, a student at Pewaukee High School, had the day off from class and spent it at the rally. This year’s midterm is the first election Tollenaar can vote in, and he said he isn’t sure how to feel about it.

“I have a responsibility I don’t quite know what to do with,” he said.

Tollenaar said while his own friends seemed encouraged to vote, he would guess about 70 percent of his classmates aren’t engaged with politics.

Ben Cleveland, a UWM junior, said he would have been part of the disengaged group if not for his friends having a conversation about why they were voting.

“It worked for me to just talk about it,” he said.