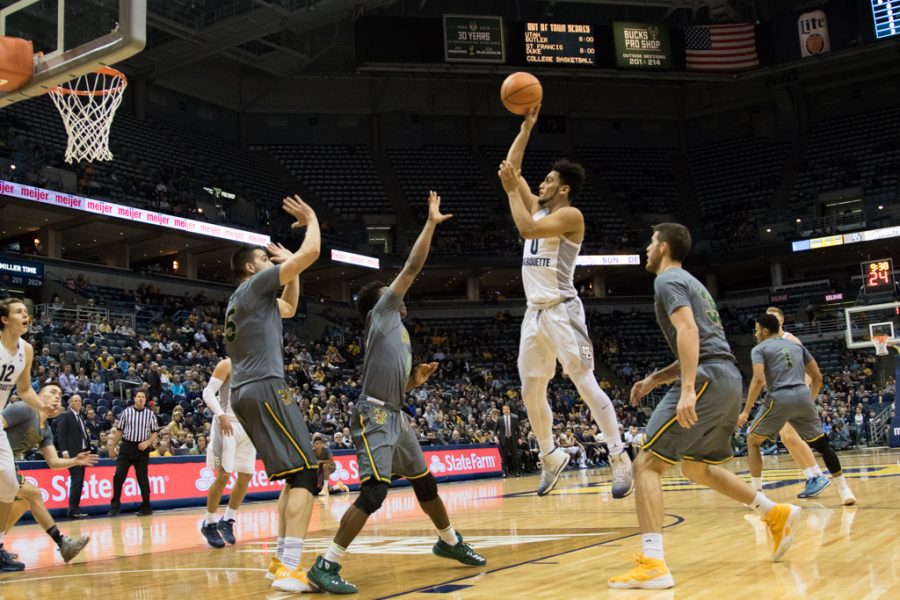 After finishing the 2017-’18 season fourth in the BIG EAST in scoring, junior guard Markus Howard’s offensive prowess is not going to sneak up on anyone.

“He’s a guy that’s going to have a target on his back because of the accomplishments that he’s had through his first two years here,” head coach Steve Wojciechowski said. “He’s had an incredible two-year run for us.”

But Howard has embraced the “target on his back,” stepping up as the leader of a team with the highest expectations from national media since the Buzz Williams era.

“I’ve had that all my life,” Howard said. “That’s nothing new. … I’m not really worried about anything.”

Howard had a partial leadership role in past years, but the presence of fellow sharpshooter Andrew Rowsey lessened the burden on Howard.

Per KenPom, a prominent college basketball analytics website, Rowsey was used in 30.1 percent of possessions, the second-highest rate in the BIG EAST. St. John’s point guard Shamorie Ponds was the only player to have a higher usage rate.

“Andrew had a bullseye on his back, too,” Wojciechowski said. “There will be even more of a spotlight on trying to take Markus out of the game.”

Howard has plenty of help, however. Fellow junior forward Sam Hauser is healthy after an offseason hip surgery. He is another Marquette player with extensive experience.

“Sam’s a warrior, a smart player and an unbelievable team guy,” Wojciechowski said. “It’s nice to see him play without any pain.”

Wojciechowski said he expects Hauser’s opportunities to score to increase as a result of Rowsey’s departure.

“We’re going to put him in the position where the ball is in his hands a lot,” Wojciechowski said. “We should because he is an outstanding decision-maker. … He’s got a chance to impact the game in every way, and we need him to do that on a consistent basis.”

Hauser accounted for more than a fifth of the team’s shots attempted in 2017-’18.

When Hauser and Howard came to Marquette two years ago, ESPN did not have either of them ranked in the top 80 of their recruiting rankings.

The rest of the roster is less certain. The only other returning player with at least 35 career starts as a Golden Eagle is senior center Matt Heldt, who was involved on only 8.8 percent of Marquette possessions last season.

“This team has a great opportunity for growth,” Wojciechowski said. “That’s the Rubik’s Cube that we have to figure out.”

One piece of that metaphorical Rubik’s Cube is graduate transfer Joseph Chartouny. The 6-foot-3 guard could complement Howard’s game well as more of a defensive and pass-first point guard.

“When I play with him, we really share the ball together,” Chartouny said. “The fact that he can really shoot the ball and he’s always a threat on offense just gives me so much more space. I love playing with him.”

The team also expects Chartouny to resolve some of their defensive woes from last season. Per KenPom, Marquette was 292nd in the country in opponents’ effective field goal percentage.

“Although Joseph is not a great athlete, he’s a really good defender because of his size, his ability to play angles defensively and he’s got real long arms,” Wojciechowski said. “He fits in really well with the personnel we have.”

The question surrounding Chartouny is his adjustment to BIG EAST basketball after three years at Fordham University. In his three seasons in New York, the Rams played six teams from the six major college basketball conferences.

In comparison, Marquette will have its sixth game against teams from major conferences by the first week of the BIG EAST season.

Newcomers like freshmen Brendan Bailey and Joey Hauser are expected to add more competition to the wing positions.

In the meantime, the plan for Howard is simple: win.

“I just want to win,” Howard said. “That’s all that I really care about.”