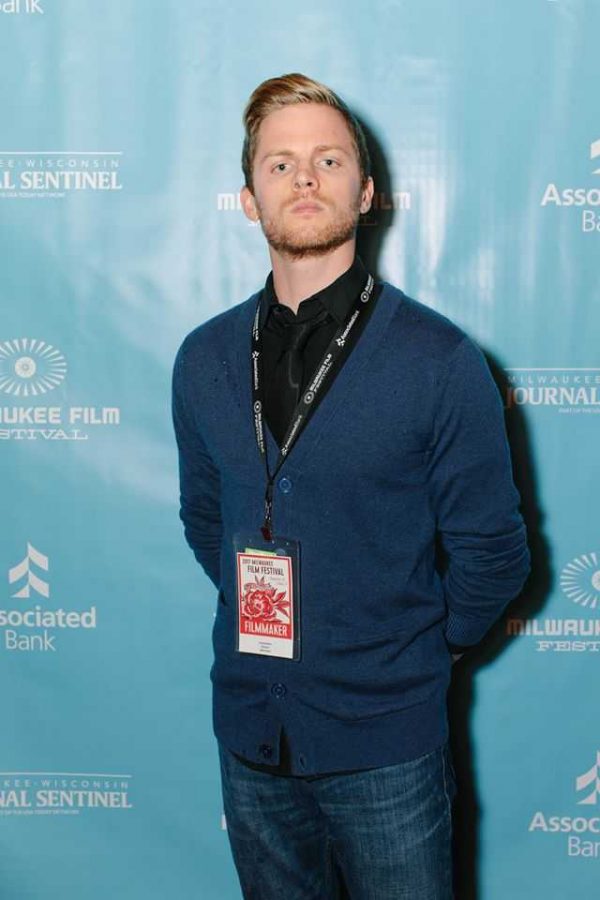 Drew Britton's film "Back at the Staircase" will screen on the final night of the festival at the Oriental Theatre. Photo courtesy of Milwaukee Film.

Digital media professor Drew Britton’s feature film “Back at the Staircase” will screen as the closing night feature at this year’s 10th annual Milwaukee Film Festival, which runs Oct. 18 to Nov. 1.

The festival finishes with a Thursday night screening at the Oriental Theatre of the film that Britton co-wrote, produced, directed and edited. The movie follows the emotions and interactions of a group of five people after their relative falls down the stairs and goes into a coma. The five relatives are forced to come to terms with the situation and their feelings toward each other.

“I was just happy that we got in,” Britton said. “And then to be invited to do what we’re doing was just kind of a cherry on top. I guess not even a cherry, it was more like a sundae.”

For Britton, the screening marks the end of a years-long process with this film. Writing began in January 2015 and took most of that year. Britton said the most important thing for him was managing the storylines for the ensemble of characters. He said ensuring that character-writing was done well proved to be a rewarding challenge.

The crew then went into the pre-production stages and shot in October 2016, collecting about 20 hours of footage. Britton then edited through winter 2016 and spring 2017, and in summer 2017 the movie went through final edits for color correction and sound mixing. The entire film was finished in August 2017. Then it was time for submissions.

“(The submission process is) the most nerve-wracking, because that’s when it’s out of your hands,” Britton said. “Like you don’t have any control over where it plays, where it screens.”

Britton submitted his film to multiple distinguished festivals, and began to hear back in November.

“Back at the Staircase” got into Park City’s Slamdance festival and premiered in the Beyond Program, a category for “emerging filmmakers working behind their first features,” according to the Slamdance website.

Of about 10,000 submissions, 15 total narrative feature films were selected for the festival, five in the Beyond program.

After seeing Britton’s film at Slamdance, Milwaukee Film Festival executive director Johnathan Jackson asked Britton if he would be submitting to the festival. After submitting, Britton received a letter inviting “Back at the Staircase” to screen as the closing night film.

While this is not Britton’s first experience with the Milwaukee Film Festival — he had a feature in 2013 and a short in 2017, as well as submitting shorts in 2014 and 2015 that did not make it in — it is his first time having a film featured as a Spotlight Presentation.

Unlike other films that might have two or three screenings throughout the festival, the Spotlight Presentations — films showing opening Night, centerpiece and closing night— only show once, Britton explained. They are given a prime screening time in the main Oriental Theatre and are more heavily publicized.

Digital media professor Joe Brown said his to-see list includes his fellow professor’s film. No stranger to the festival, Brown had short films featured in 2015 and 2016 and volunteered on the festival screening committee.

Besides Britton’s film, a few others caught Brown’s attention. Brown missed the opening film “Science Fair” but said he plans to stream it on his own time. As a documentary filmmaker, he is also interested in seeing “Capturing the Flag,” a documentary sponsored by Marquette about democracy and voting.

Patrick Hardie, a senior in the College of Communication, researched the festival’s movies in depth and picked out three or four he said he plans to attend. Having attended single movies at the festival in previous years, Hardie said he decided to take advantage of living near the unique community event.

“Being a senior, it’s my last year, so I thought, ‘let’s like really kind of go full-regalia with it if we can,’” Hardie said.

For anyone that might not be a big fan of independent films, Hardie said he would suggest the documentary “Pick of the Litter”, which follows five puppies from birth to becoming guide dogs for the blind.

For Hardie, he said attending independent films is different from what he would typically see in theaters and provides a learning experience.

“I find a real thrill in going to a movie … that no one really knows, but that I specifically know nothing about, that I can then learn something from,” Hardie said.

With the Milwaukee Film Festival reaching its 10th year, this month’s introduction of No Studios and an assortment of local filmmakers like Britton finding success, the city’s film industry is growing. And Brown said he hopes to see a similar growth reflected at Marquette.

“We’re trying to grow a creative culture over here in Johnston,” Brown said. “We have great journalism and great strategic communication, and we have a really good digital media and filmmaking program, but we’re trying to grow it. So any students that want to come and get involved, they can. They don’t have to be in (the College of Communication), you know, they can be in other majors.”