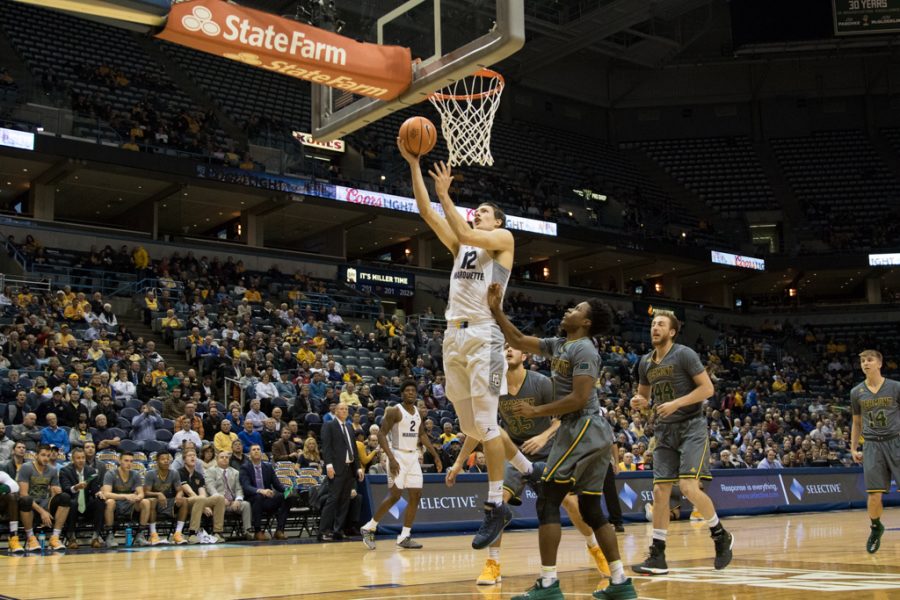 Then-junior Matt Heldt makes a shot against Vermont in MU's 91-81 win in December 2017.

When Steve Wojciechowski took over Marquette basketball in 2014, one of the first players to lead with Wojciechowski’s culture was not necessarily the flashiest or most noticed.

That player was Matt Heldt. The senior big man started in 32 out of a possible 35 games last season for Wojciechowski. His stats likely won’t blow someone away, but his consistency and work ethic are traits that any program would appreciate.

“Matt is somebody who’s been a culture driver in our program,” Wojciechowski said.

He also said the team is in a better position to win with Heldt on the ﬂoor, whether he starts or comes oﬀ the bench.

“When Matt is on the ﬂoor, most of the time we play better,” Wojciechowski said. “Whatever role Matt has, he is all in it, 100 percent, for Marquette basketball.”

The unselﬁshness of Heldt has helped his team in several facets. Freshman Brendan Bailey already felt the impact Heldt has on the team, and the season hasn’t even started.

“Matt’s a great leader in everything we do, whether that’s classwork or going through plays,” Bailey said. “He’s a veteran … (It’s) his senior year, so he has that lead role to be directing people where to go, especially underclassmen like me.”

Heldt recognizes his role on this team, and as a senior he said he knows he can provide certain qualities that other players with less experience cannot.

“I have the most experience, so I’ll have a pretty good idea of what each day will look like,” Heldt said. “Therefore it’s my job (to) make sure that the rest of the team, and especially the new guys, have a better preparedness for each day and know more so we can be a more successful program.”

Heldt doesn’t have the Markus Howard jump-shot or the Jamal Cain athleticism, but he does have a leadership quality that is not easily taught.

“I try to be a leader as much as I can on the court,” Heldt said. “I’ve been running the sets and playing the defense for my fourth year now, so it’s my job to make sure that if guys don’t know or have a hard time grasping the concepts, that I need to take it upon myself to help them get a better handle on what we’re doing.”

As the men’s basketball program looks to return to the postseason, Heldt will be the only scholarship senior on the roster.

With this being Heldt’s ﬁnal season at Marquette, he has thought about life after college basketball, and he said he has a plan in case basketball doesn’t lead to an overseas career.

“Obviously if I could play basketball that would be the goal, but also basketball doesn’t last forever, so I have to have something else to do,” Heldt said. “With that, the goal is to go to law school and become a lawyer.”