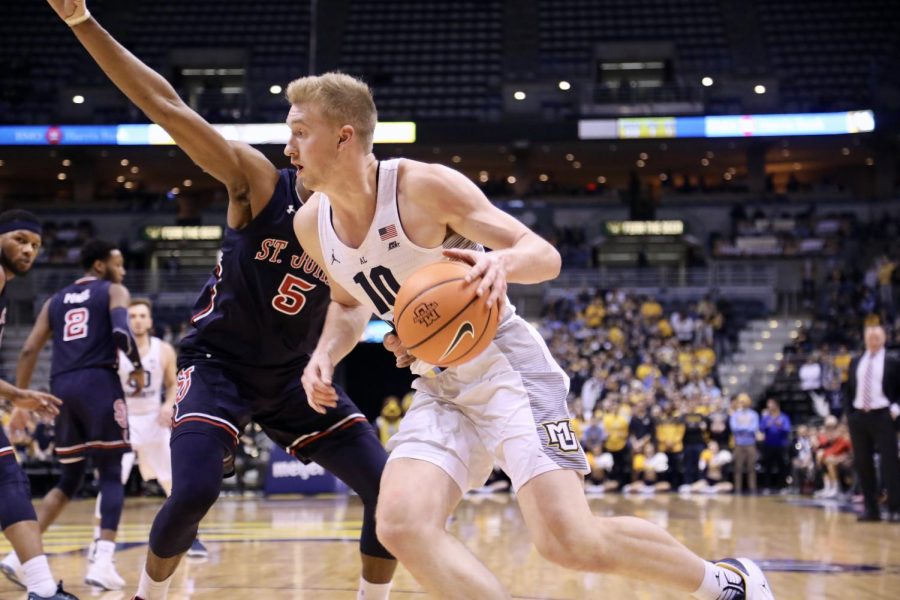 After playing together for two years at Stevens Point Area Senior High School, Sam and Joey Hauser lost only one game and won two state titles. The brothers said they don’t even remember the loss.

“We have a great chemistry. We know what each other’s strengths and weaknesses are on the court,” Sam said. “We know how to help each other in those areas as well.”

Two years later, Sam, a junior, and Joey, a redshirt freshman, are reunited on the court on another team with lofty postseason expectations.

“On the court, we play off each other and look for one another, along with our teammates,” Joey said. “The chemistry between us and our knowledge of one another will always stay the same.”

Unlike at SPASH, where Sam and Joey combined for 35.8 points per game in 2015-’16, the Hauser brothers will not quite be able to take over games by themselves.

The biggest question will be how their chemistry from high school will transfer to the Division I level. As both of the brothers have said, college is a different game, and high school success doesn’t mean much.

“I would think the chemistry they have built will help them at the college level,” Anderson said. “It won’t hurt, but I’m sure they would both tell you it doesn’t guarantee anything.”

The brothers’ relationship goes beyond the basketball court at SPASH. Growing up together and playing games both with and against each other helped grow their competitive spirit, as well as their relationship with one another.

“They have a great bond as brothers and have spent so much time together,” Anderson said. “I remember some great battles from when they were just little. I think those battles, along with being teammates, helped develop a strong bond.”

Now at Marquette, the brothers are working to improve on different skillsets in preparation for playing together.

Head coach Steve Wojciechowski credited Sam for his big jump from his freshman to sophomore year and said Sam needs to make another jump this season.

“(Sam) has been working on and getting better at shooting off the dribble, playing off the ball as well as working defensively,” Joey said.

After getting accustomed to college life while rehabbing from his ankle injury last semester, Joey is now working to improve his defense, especially his ability to “defend all five positions,” he said.

Moving forward, the Hauser brothers are looking to bring their brotherly chemistry to the Golden Eagles.

“We’re just trying to bring that winning culture we had to Marquette and try to experience what we did in high school at the college level,” Sam said.

The brothers are relishing the opportunity to play in games together again.

“It’s obviously really a special moment for me even being on the same practice floor,” Joey said. “Once we get on the court (at Fiserv Forum), it’ll be an even cooler moment. It’s something we’ve dreamed of for a long time.”