Sprecher goal, Henry’s 10 saves not enough to outlast No. 4 Georgetown 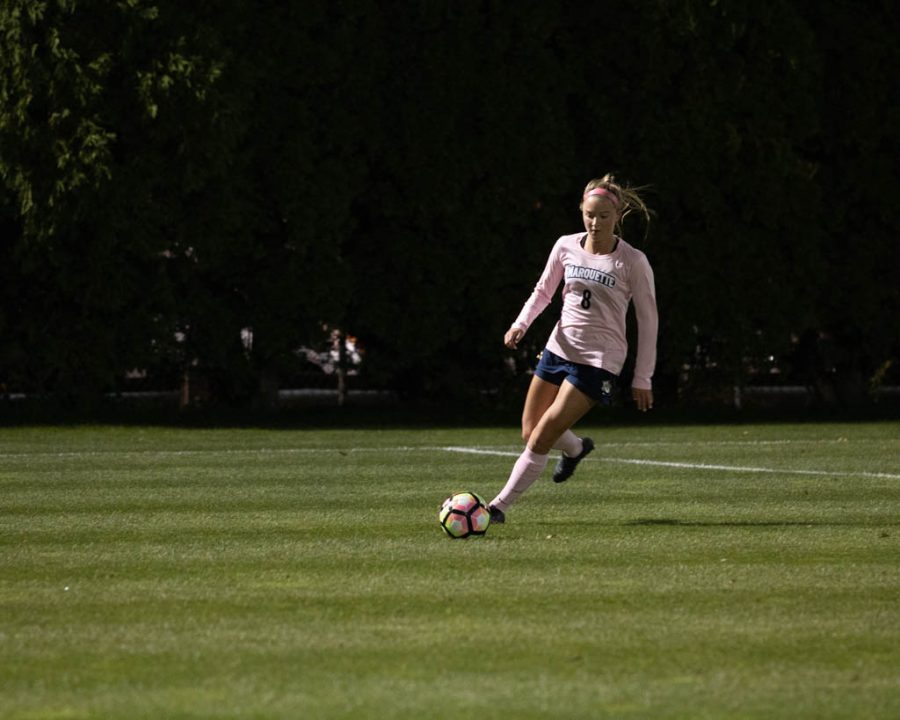 For about 10 minutes, it looked like Marquette women’s soccer was going to achieve a program first: defeating a top-five team. The team had a 1-0 lead over No. 4 Georgetown with 28 minutes remaining in regulation.

“We changed our mindset to, ‘Let’s go out there and have some fun,’” Marquette junior goalkeeper Maddy Henry said. “That really, really made an impact tonight.”

Instead, the Golden Eagles lost to No. 4 Georgetown 2-1 in double overtime on a Caitlin Farrell golden goal in the 102nd minute.

“Georgetown’s craftiness just came out a little bit,” Henry said. “Anything over 90 minutes is going to be a grind … It’s those moments that make me realize, ‘Wow, that’s the No. 4 team in the nation.’”

Marquette sophomore forward Kylie Sprecher chipped a shot from about 15 yards out in the 62nd minute to give Marquette its first goal against Georgetown since 2015.

“I’ve never run up the field (like that after a goal). I was just sprinting out there it was so sick,” Henry said. “I felt so proud for her. This season has been a little off for her, and I think she deserved that goal so much more than anyone.”

Then reality began to set in, as Georgetown striker Kyra Carusa hit one past Henry 10 minutes later to tie the match at 1-1.

Carusa’s goal came after a close call a few minutes earlier. A Marquette foul prompted a Carusa penalty kick in the 66th minute, but Henry made a diving save to keep the Hoyas off the scoreboard.

“Honestly I was just praying to God” Henry said. “I was just like, ‘Please God help me out.’ And it felt kind of nice to save it.”

Georgetown had an 26-9 shot advantage, but 10 saves from Henry kept the Golden Eagles within reach of a win.

“She’s been a rock for us all year,” head coach Markus Roeders said. “She made some great saves. Positionally, she tried to keep things organized.”

With the loss, Marquette is four points behind Providence and DePaul, who are tied for sixth in conference. The top six teams advance to the BIG EAST Tournament.

“We don’t really have anything to show (in the standings) for what we did tonight,” Roeders said. “Still, there are some positives.”

Marquette will have to defeat Creighton on the road Sunday to remain in BIG EAST Tournament contention. A loss or tie would mathematically end the Golden Eagles’ pursuit of any postseason play.

“It’s probably a long shot (to the BIG EAST Tournament), even if we happen to win the next two games,” Roeders said. “Could we be in some sort of tiebreaking situation? Maybe, but a lot of things would have to align to make that happen.”