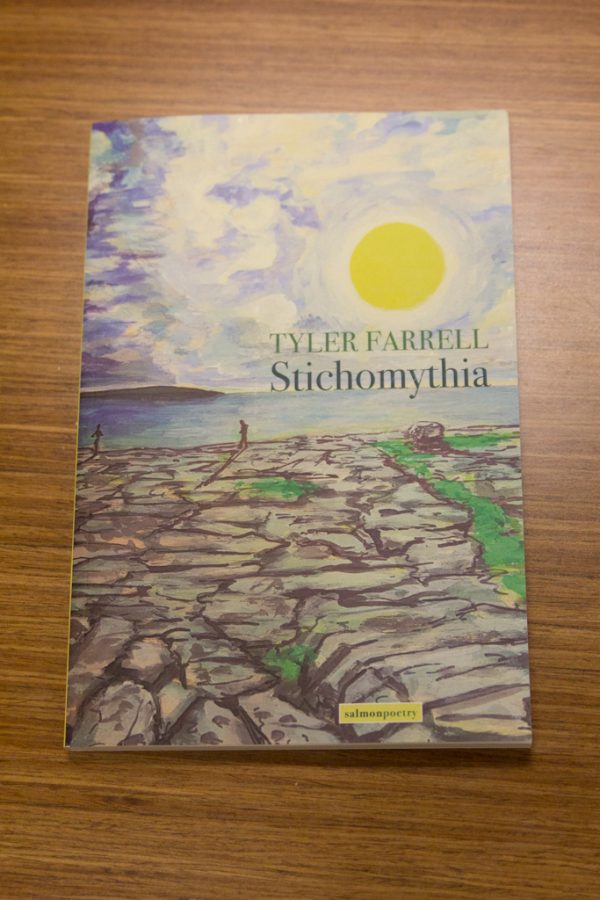 Tyler Farrell will read from his poetry book, Stichomythia, which was published in May.

English professors CJ Hribal and Tyler Farrell will kick off The Creative Writing Series, Marquette’s new book reading event, this Wednesday from noon to 1 p.m. at the Haggerty Museum of Art.

Hribal and Farrell will read for approximately 20 minutes each, offering visitors a chance to take a break and absorb creativity, Sorby said. Light refreshments will also be provided.

The Creative Writing Series will hold a second reading Nov. 8, as well as two more readings next semester, which have yet to be scheduled. Sorby said she believes making the readings a regular series will keep creative writing in the forefront of Marquette’s mind.

The series’ formation follows the recent implementation of a creative writing minor in the College of Arts & Sciences. Sorby said the informal event is meant to spread both creativity and awareness of the work being done on Marquette’s campus.

Hribal noted that he feels students often do not know what is happening on campus and thinks The Creative Writing Series is an opportunity to bring faculty work to light.

“It’s funny because I’ve been here almost 30 years and this is the first time I’m actually reading on campus,” Hribal said, adding that he loves to do readings all over the country. Hribal plans to read from his fictional book, “Do I Look Sick to You? (Notes on How to Make Love to a Cancer Patient).”

“If I read that story, my goal is usually not to have a dry eye in the house,” Hribal said.

He also added that he hopes the reading will spark writing interest in students.

“It makes it part of a larger conversation and you hope it gets people excited about doing their own work,” Hribal said.

Jennifer Verdaguer, a senior in the College of Art & Sciences and a creative writer herself, said she is interested in the series. Verdaguer said she often pulls her inspiration from other writers and their works and that The Creative Writing Series could be a good place to find inspiration.

Alex Hunter, a junior in the College of Arts & Sciences and student of Hribal, said Hribal’s passion in class is the main reason he plans on attending the event.

“Sometimes (Hribal) goes five or 10 minutes past class time, but I don’t care because he gets so into it,” Hunter said.

Farrell, who specializes in poetry, will be reading from his newly-published book of poems, “Stichomythia,” a collection of conversations between Farrell and his friends and family. Through these conversations, Farrell explores themes of relationships.

“I jumped at the chance. I love doing readings,” Farrell said.

He added that reading and writing are important in fostering critical thinking skills and can help mold the minds of students. He said having faculty read their work gives students a different view of their professors and shows students that there are more ways to learn than just those that exist in the classroom.

“(The Creative Writing Series) shows that there is a lively atmosphere on campus,” Farrell said.

Kat Propsom, a sophomore in the College of Arts & Sciences, said The Creative Writing Series is an opportunity to expose herself to subjects with which she normally wouldn’t interact.

“I don’t think about the other departments, but they’re just as important,” Propsom said, noting that because she is always working in labs, she never hears about art.

Courtney Michaelson, a freshman in the College of Arts & Sciences, said she looks forward to hear what inspired the author’s writing and the literary devices they use.

“Poetry is especially fun to hear,” she said.

She also said part of her interest comes from her plan to add a writing intensive English major into her academics.

“We have an empathy deficit,” Hribal said. “(Writing) gives us a chance to inhabit someone else’s mind … it expands the sense of what it means to be human.”

For Hribal, reading and writing is about opening students up to alternative perspectives.