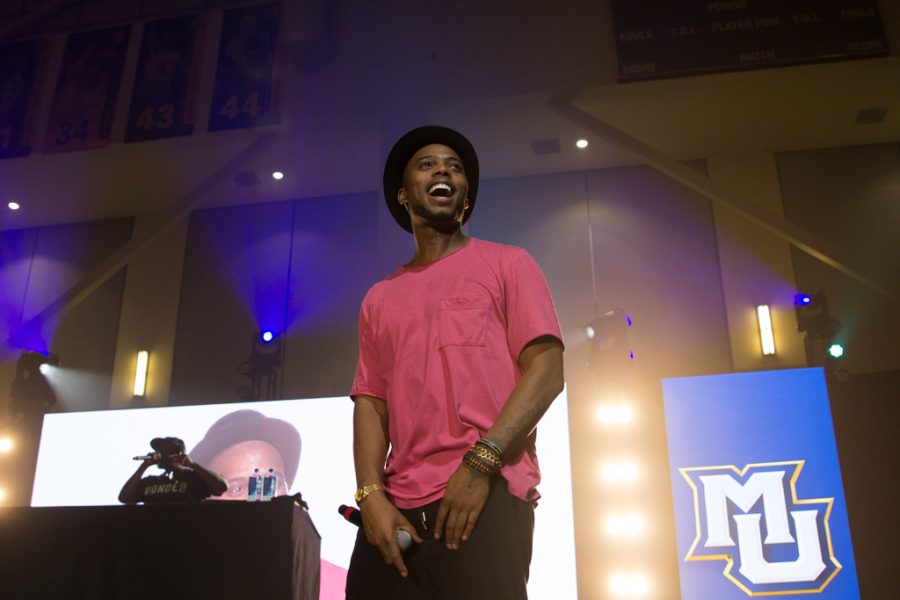 B.o.B rocked the Al McGuire Center Friday night as part of a new tradition to host a concert at Marquette Madness.

To start off Homecoming Weekend, the men’s and women’s basketball teams held a concert at the Al McGuire Center for Marquette Madness. The special artist was B.o.B, whose real name is Bobby Ray Simmons Jr., a rapper with several Grammy nominations and platinum hits.

Rather than having just a regular stage at the Al, there was a runway platform to allow the artist to be between the crowds on either side. There was a small crowd of students on the floor and many more in the surrounding bleachers. To receive VIP access passes this year, the Marquette men’s basketball team created a scavenger hunt on its Instagram and sent clues to help students find a shirt at different locations on campus.

After men’s coach Steve Wojciechowski walked onstage to introduce B.o.B, students went wild as the artist walked out. He started off the concert with his song “Mr. Mister.” It was not as popular as the rest of his songs but students still went crazy.  Most students showed their Marquette pride by dressing in regular Marquette T-shirts or full head-to-toe Marquette spiritwear.

B.o.B performed about eight songs, giving a concert that lasted about 45 minutes. The songs included his top hits, “Airplanes” and “Strange Clouds.” Not only did students seem to enjoy a free concert, but B.o.B’s performance was very crowd-oriented. He threw out several free shirts and crowd surfed about five times. To top it off, the rapper brought three students from the floor section onto the stage to dance during his song “HeadBand.”

B.o.B. has been vocal in his belief in the conspiracy theory that the earth is flat. In 2017, he started a GoFundMe to raise money for satellites to find the “curve,” referring to the idea of how “Flat-Earthers” think that the curve of the earth would be visible to the human eye through satellites. During the concert, there was a plastic blow-up globe being thrown around. Once it landed on stage, B.o.B deflated it and announced that he is a member of the “Flat-Earth Society.”

Overall, B.o.B was a very energetic performer. Although he did not have great dancing ability, he brought energy through his songs and ability to get the crowd hyped up by including students in his performance. His vocal arrangements were subpar, which included recorded audio from the featured artists in his songs, rather than B.o.B singing himself. For future performances, he should bring another artist that is featured in one of his songs.

As the concert came to a close, B.o.B put on a Marquette T-shirt with both the men’s and women’s basketball team dancing by his side, making him an honorary Golden Eagle for the night.