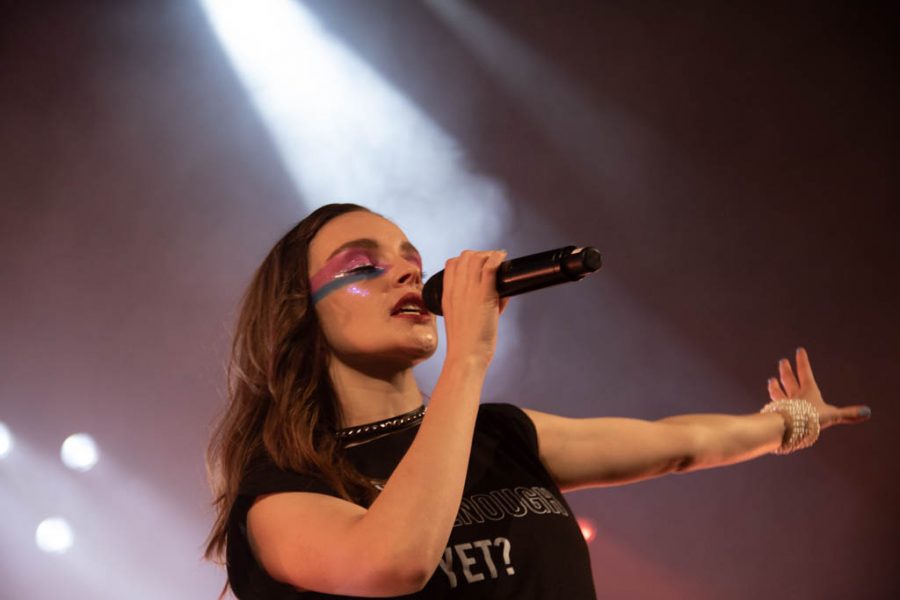 The Riverside Theater has been host to many artists over its lifespan, and last night it welcomed back everyone’s favorite Scottish trio Chvrches. This was my first experience with both the theater and artist — and both left a lasting impression on me.

The theater’s size can host a large audience while keeping the atmosphere intimate. Lauren Mayberry of Chvrches took advantage of the personal environment by signing a vinyl sleeve a fan held during the show.

Before all of this occurred, Los Angeles-based group Lo Moon opened up the night. They sounded exactly as I expected an opener for Chvrches to sound, which is a great thing. The sound is a very mellow indie rock that one can sit back and vibe to, which is a nice counter to the electro-alt sound of the performers who followed. This benefited Lo Moon greatly, as it didn’t have to put up a spectacle with its short set.

When it was time for the headlining performers to come out, they did with a bang, knocking out three fan favorites in the span of four songs. Quite an entrance for someone, me, who has never experienced the Scots live. The next two songs were fun and kept the crowd engaged

When Martin Doherty took over the microphone for a couple of songs, I could tell the crowd wasn’t as engaged as when Mayberry sang. This was rather a shame, as “God’s Plan” is one of the stronger tracks on their latest album.  After that, Mayberry simply killed it, dancing her way into the audience’s heart throughout the rest of the set.

The remaining songs were just as good, if not stronger, than the first half. This was not only due to Mayberry’s vocals, but the performances from Doherty and Iain Cook — who proved this isn’t “The Lauren Show,” as many would believe.

The standout songs during the whole set were “Recover,” “Clearest Blue” and “The Mother We Share.” My only real disappointment was not getting performances of “Never Ending Circles” and “High Enough To Carry You Over,” but as always, musicians can’t fit every song into their limited setlists.

Overall I was satisfied, but the production showed slight flaws, which is to be expected in most shows. For the performances of “Really Gone” and “Deliverance,” the music was much louder than Mayberry’s already powerful vocals, which takes a lot of noise to do. This was really the only problem I had. I think Mayberry currently has one of the strongest and most unique voices in music.

However, they worked through this and delivered some amazing renditions of my favorite jams, specifically “Recover” and “Miracle.” The best bits of the concert came with the banter between the trio cracking jokes and making fun of each other. The banter only reaffirmed my thoughts on Mayberry being one of the funniest and most special frontwomen in music at the moment.

The show was essentially what I expected, which is great for me as I’ve loved the group since 2016. My only desire, besides playing the two tracks I stated earlier, would be a joint tour with Paramore. They have collaborated previously on Parahoy, Paramore’s yearly music cruise, in 2016.

That collaboration occurring again would be dreamlike for many fans. In general, it was a fantastic show with some bumps in the road and enough raw energy to keep it authentic. I would see them again, hopefully sooner rather than later.