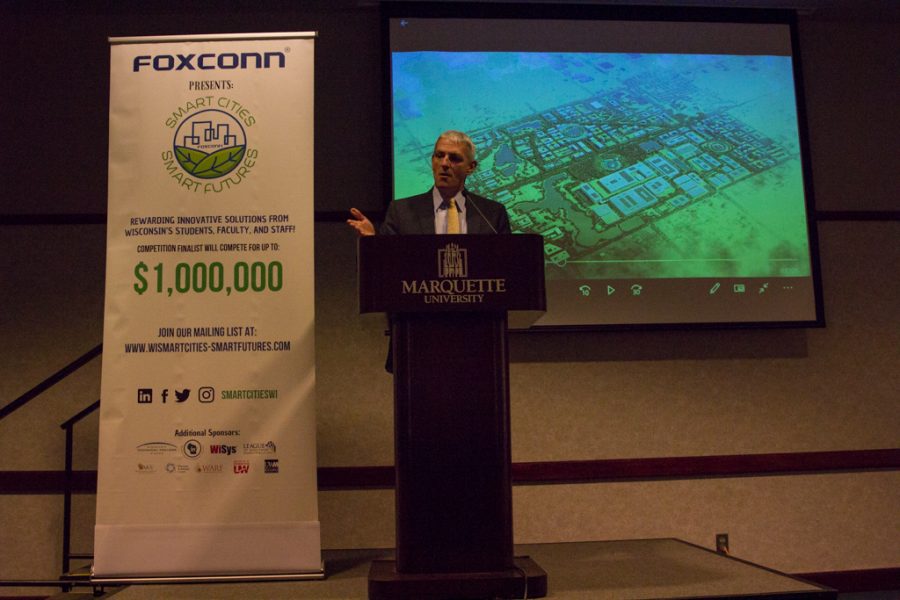 In a statement provided by Marquette, Foxconn’s initiative works to develop smart and connected communities and systems throughout Wisconsin through the ideas of students, faculty and staff.

Foxconn is a Taiwanese technology company constructing a new factory site in Mount Pleasant, Wisconsin. The company proposed a North American headquarters in downtown Milwaukee, and has committed up to $1 million over the next three years to the Smart Cities-Smart Futures initiative.

The Wisconsin Association of Independent Colleges and Universities is one of the academic partners of Foxconn. University spokesperson Chris Jenkins said Marquette is a member of WAICU.

“More generally, Marquette is continuing conversations with Foxconn regarding how we can help fill their talent pipeline needs,” Jenkins said.

“We can tap into the idea and the concept of how to build (a) smart city, a smart community or smart future here for themselves, for the their family and for their community,” Yeung said.

“That’s why we’re leaving it open to the creativity and the thinking of the community, especially the students, the staff and the faculty members,” he said.

University President Michael Lovell said in his opening remarks that “the university is really proud that Foxconn has chosen Marquette University to really kick this thing off today.”

“I think it’s a great opportunity for all of us to really think about our future and put the ideas within our campuses as well as faculty, staff and students to have an opportunity for them to put to fruition and really make a positive difference for society,” Lovell said in his opening remarks at a press conference Monday.

Yeung said college students have some of the newest, brightest ideas Foxconn really wants to tap into.

“That’s why it’s a critical element of our competition itself,” Yeung said.

Foxconn is looking for proposals from individuals with higher education to enhance living environments, according to a brochure handed out at the event.

The competition kicks off Oct. 1 and will take entries until Oct. 31. Up to 100 entries will be selected as part of the first round and nominees will receive $500. The second round will consist of 50 entries receiving a $1,500 award. In the third round, 16 entries will receive $5,000. The winners will be announced in spring 2019.

“Marquette University and President Lovell have been a great partner for Foxconn for this competition,” Yeung said.