Immigration forum seeks change in how we go about political discourse 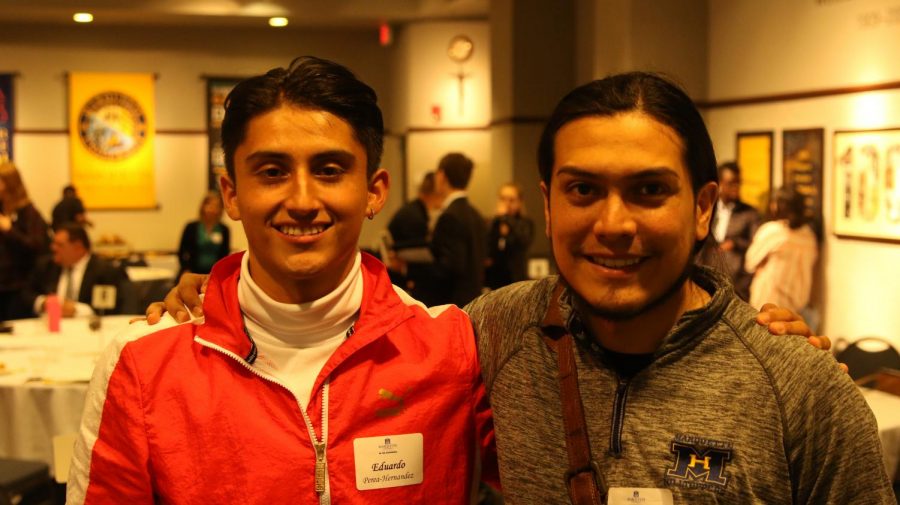 Eduardo Perea-Hernandez (left) and Alan Chavoya moderated and led discussions at the event.

The “Democracy in Troubled Times” immigration forum was held in the Alumni Memorial Union last Thursday with the goal of encouraging conversation about a topical political issue among university community members.

There were student and faculty moderators to facilitate discussion, pose questions and serve as knowledgeable sources about the issue.

“We didn’t just want to do a lecture, (we wanted) to connect Marquette with the greater Milwaukee community,” Amber Wichowsky, director of the Marquette Democracy Lab, said.

The idea for the event first came about around four years ago, said John Su, vice provost for academic affairs.

“President (Michael) Lovell and Provost (Dan) Myers initiated the Marquette Forum three years ago to engage members of the community in addressing the most pressing social issues facing us all,” Su said.

The event was attended by people of different backgrounds, students, citizens of Milwaukee and staff members. Michael Neblo, director of the Institute for Democratic Engagement and Accountability at Ohio State University, was the keynote speaker and spoke on the goal of the forum.

“We’re trying to bring people together from different backgrounds to talk about the issue of immigration in a way (that is) informed, civil and substantive,” Neblo said.

Marquette University Student Government and student moderators were at the event to participate in and lead the discussion. Meredith Gillespie, president of MUSG, spoke about her thoughts on the event.

“It’s a really good opportunity to learn how to engage with others and I’m proud of what Marquette is doing,” Gillespie said.

Eduardo Perea-Hernandez, a senior in the College of Arts & Sciences, and Alan Chavoya, a second-year masters student in philosophy, were moderators that led discussions at Spanish speaking tables. Perea-Hernandez said speaking the native language of immigrants changes the nature of the discussion.

“Spanish makes the topic more relatable. A lot of us have ties to those people; Alan and I are both children of immigrants,” Perea-Hernandez said. “We get to engage with others who don’t have the same experiences, and I hope people can learn and grow from this rare opportunity.”

Attendees discussed many different aspects and intricacies of the issue of immigration in America. The core issues of the discussion were broken down into three main options as possible solutions to our current situation. The points included welcoming immigrants freely, enforcing the law and being fair to those who follow it or slowing down and rebuilding our common bonds, which were outlined in discussion pamphlets provided by the National Issues Forums.

Su said it is important to hold events like these at Marquette.

“We have a responsibility to promote genuine dialogue around these difficult issues,” Su said. “If we can learn to listen and deliberate over issues on which people disagree, then we strengthen our democracy.”

Wichowsky explained how this issue affects everyone.

“This is a human issue. These are people, and to have this conversation now is important,” Wichowsky said.

“We all hope people leave learning something they didn’t know when they first walked in because it’s important what happens after this,” Neblo said.

Chavoya said there needs to be more variety in the opinions shared.

“We tend to see the same people at these events. The people that aren’t here are the voices that need to be heard the most,” Chavoya said

Neblo said he thinks it is important to participate in these discussions.

“It’s about people coming together. … It’s not just what I want. … We need to be working out what we should do,” Neblo said.