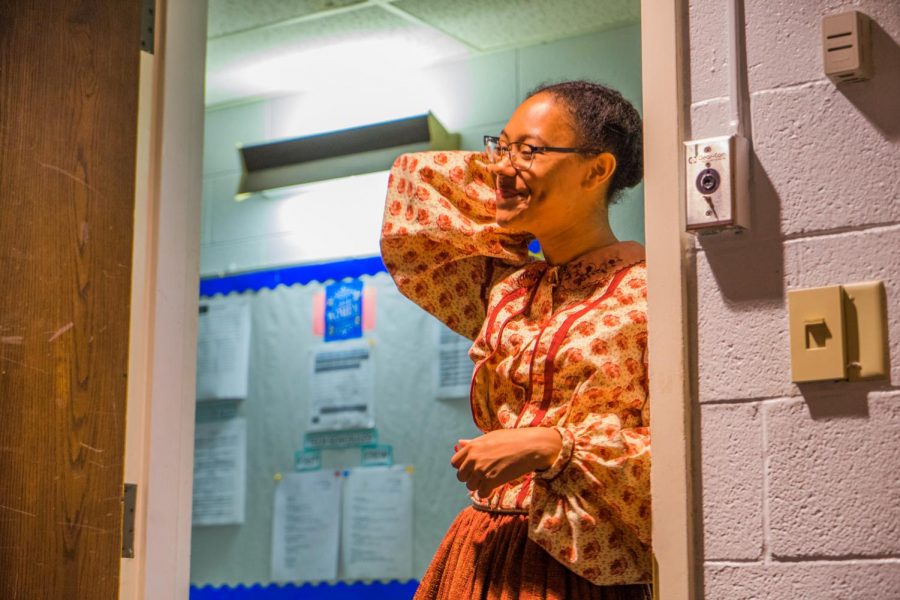 Cambryelle Getter is part of the ensemble for "Little Women," which will be at the Helfaer Theatre all weekend.

Marquette Theatre’s production of “Little Women” opened last weekend at the Helfaer Theatre. Remaining performances are this Thursday through Friday at 7:30 p.m. and Sunday at 2:30 p.m.

This year marks the 150th anniversary of Louisa May Alcott’s classic novel “Little Women.” A coming-of-age novel with a feminist outlook ahead of its time, “Little Women” tells a story of family, friendship, growth and change. The story still resonates with fans generations later, and the story has been getting more attention especially now in its 150th year. This weekend, a modern-day film adaptation of the novel was released in theaters, this film being the seventh feature film made based on the book. Television adaptations were also released on PBS Masterpiece and BBC  in the past year.

“Little Women” tells the story of the four March sisters: Meg, Jo, Beth and Amy. Jo (Lindsay Webster) is an aspiring writer with a strong sense of independence and adventure. She is the ring leader for older sister Meg (Johannah Lee) and younger sisters Beth (Liz De Vere Hunt) and Amy (Caroline Norton), who live with their mother “Marmee” (Katie Dickey) while their father is away fighting for the Union in the Civil War. The sisters grow and develop over the course of the show, learning about the importance of family and the nature of life and change.

Jamie Cheatham, head of acting and artistic director, had the role of coordinating various aspects of the production, as well as hiring the team of directors and choreographers that worked to bring the show together.

For Cambryelle Getter, a sophomore in the College of Communication and member of the ensemble in “Little Women,” director Lenny Banovez’s process of working with the actors was different from what she was accustomed to.

“Our director is interesting. He does things differently. He doesn’t pre-block anything, he just kind of, has ideas and goes,” Getter explained. “Honestly, it made it more natural. Like, when you watch it, you’ll feel like this is all real, because it is, like these are the actor’s movements … it made the production more wholesome I think.”

The process of putting together this production of “Little Women” involved not only the guidance of experienced professionals, but also a dedicated cast and crew with a willingness for a demanding time commitment.

Kelsey Harlow, a junior in the College of Communication, is assistant stage manager and a co-props designer for “Little Women.” Auditions for the show were at the end of March, Harlow explained, then cast and crew had all summer to research, prepare and memorize, and then there were just four weeks of intensive rehearsals before curtains opened.

Harlow added up the amount of time she spent preparing for the production over the last few weeks.

“So, four hours of rehearsal, plus and extra hour for stage management, so five hours a day, six days a week. So that’s 30 hours a week, if not more. I also work in the shop, so that’s another two hours a day between classes, work and rehearsals,” she said.

The amount of time the cast spent working together was evident in the onstage chemistry between characters and smooth performance.

The show displayed strong acting and vocals all-around. Webster delivered a captivating performance as the protagonist, rarely leaving the stage. Her humorous line delivery, strong vocals and expressive acting gave her a powerful stage presence and played an essential role in carrying the show.

In fact, all four of the story’s sisters gave shining performances. Their stage interactions made them appear as believable sisters undergoing the trials of dealing with life’s changes, struggles and balance between remaining tight as a family and growing distant.

Another notable performance came from Nick Parrott, who played Laurie Laurence, the wealthy boy-next-door and honorary brother of the March sisters. Parrot’s boyish charm, paired with impressive vocals, dancing and acting made him a great addition to the band of sisters.

Just as noteworthy as the acting was the show’s impressive design, lighting and special effects. On stage fire, kite flying and a lightning storm were just some of the striking aspects of the performance. In addition, a large, beautiful set and period costume — each actress wears a corset in the production — make for design that is both pleasing to the eye and helps tell the story in a manner accurate to the era.

Johannah Lee, a sophomore in the College of Arts & Sciences, who plays Meg March as well as Jo’s fictional character Clarissa, said that she hoped that “Little Women” leaves an impact on audiences.

Lee said she thinks audiences can take to heart the theme of “reflecting on your past and seeing what makes you who you are today,” she said. “And being okay with who you are and not letting other people tell you who you need to be, I feel like that’s a big theme.”

“I think realizing that it’s okay to be different, that’s one of the biggest things about Jo. She stands out from everybody else, she’s not like everybody else, she doesn’t want the same things. She rebels, and I feel like that’s huge. … Hopefully (audiences) take that and run with it, because I think we need that at Marquette,” Getter said.