Student-made film ‘I Too, Am MU’ screens, aims to create dialogue about minority student experiences 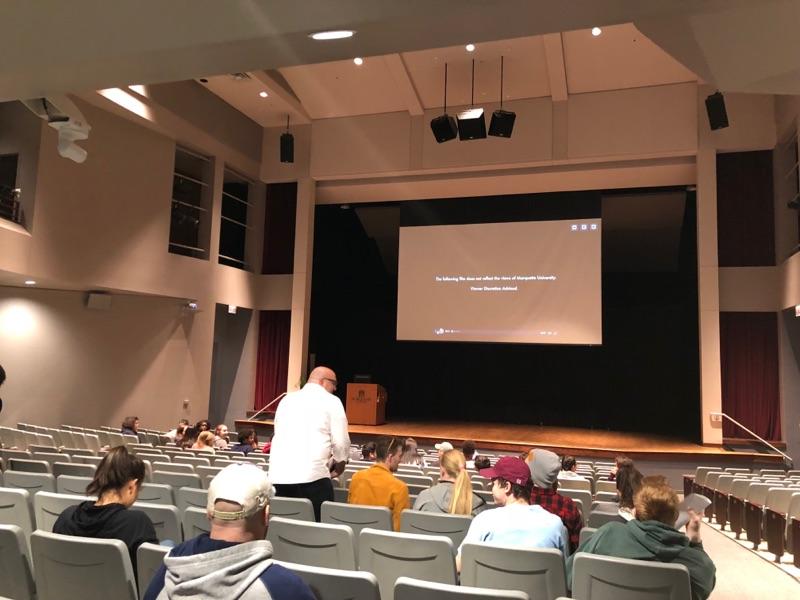 “I Too, Am MU" showcases a disclaimer before the film begins. Photo by Emma Tomisch

The Office of Intercultural Engagement held a screening and discussion Sept. 26 for the student-made film titled “I Too, Am MU,” which seeks to give a voice to minorities at predominantly white universities.

“The purpose of this film is to shed light on institutional injustices, not only at Marquette but worldwide,” Ryan Barelli, co-director and graduate student in the College of Communication, said. “In hopes of creating a united student front, the film is supposed to highlight and represent the voices of students of color at Marquette by offering socially innovative solutions toward improving the general campus climate.”

Barelli, along with co-director and alumnus Jaison Banks, began production on their 42-minute film in October 2017. The film took them roughly seven months to complete.

“The process was, in a way, years in the making,” Banks said. “Ryan and I met our sophomore year and bonded over our love of art. We are both artists who constantly strive to put things out into the world with a message.”

The film features 11 racially diverse students on campus who shared their experiences as minority students.

Barelli said he wants audiences to reflect on the stories presented in the video.

“If you are uncomfortable upon viewing the film, ask yourself why,” he said.

Many of the students featured in the film spoke out about being the only student of color in their classes and how they wish they had better support and resources from other students and staff.

Students in the film raised questions and revealed their identities as students of color at Marquette.

“This film is not meant to divide campus, but rather open up and amplify a dialogue that has already been happening for years,” Banks said.

A disclaimer was presented at the beginning of the film expressing that it does not reflect the views of the university and that faculty worked hard to coordinate with Banks and Barelli to ensure a positive response from the Marquette community.

“Jaison had a powerful effect on (provost of Marquette) Dan Myers and me,” University President Michael Lovell said in a tweet Sept. 26. “The work that he, Ryan and all the students of (the) ‘I Too, Am MU’ campaign shared and the dialogue it fosters is important for Marquette.”

Banks said the administration at Marquette was well aware of the issues being discussed in the film.

“They have expressed plans that have been put in place to foster a better environment to deal with issues like these on campus,” Banks said.

The film premiered in April 2018 at Todd Wehr Chemistry. After the screening, Lovell and Myers requested a copy of the film to show to faculty so the stories and experiences highlighted in the film won’t have to be reality for all incoming students of color at Marquette, Banks said.

“I think the key to this film and campaign is to tell the truth and just start the conversation,” Barelli said. “We used this film to catalyze meaningful dialogue on campus and acknowledge that this issue is embedded in our society and culture.”

A discussion followed the screening of the film, which gave students an opportunity to voice their opinions and continue to address the issues presented in the film.

During the discussion, students talked about how to support first-year students of color, how to be a white ally and how to integrate clubs and groups to inspire change.

Jacob Kello, a freshman in the College of Business Administration, said he learned a lot from the film and the discussion that followed after viewing the film Wednesday. Kello is a Chaldean Christian and first generation U.S. citizen whose parents immigrated from Iraq.

“I’m able to assimilate with everyone because I came from a diverse high school, but there aren’t a lot of people like me here, so it’s hard to make my culture known without being seen as an extension of a white person,” Kello said.

Changes are still being made on campus and Banks said the president, provost and many media outlets at Marquette have expressed the need for the film and desire to have the conversation go on.