Men’s soccer fails to score in battle with Georgetown 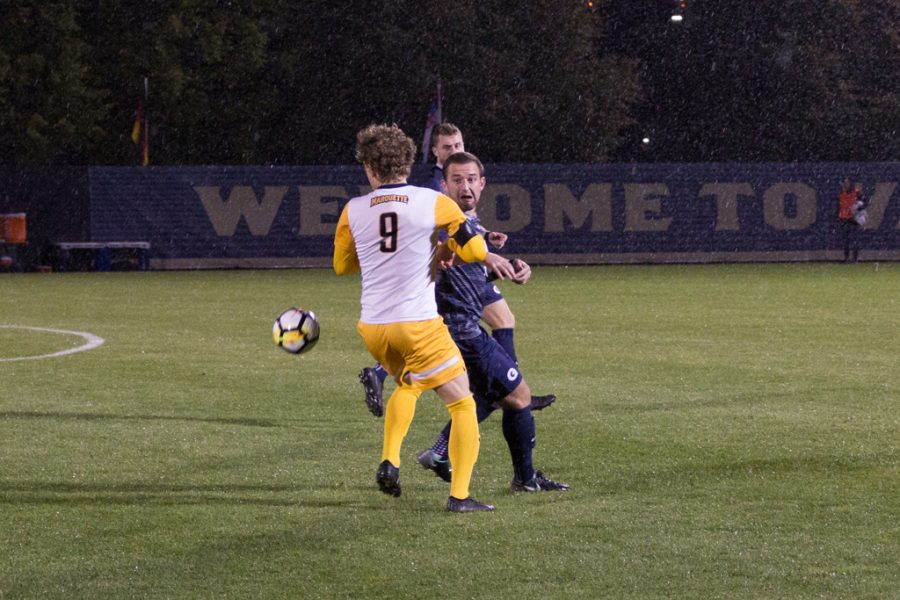 The Marquette Golden Eagles broke their three-game losing streak Saturday night with a 0-0 tie against Georgetown University. The Hoyas, who received votes in the United Soccer Coaches poll, were not able to put up a point either. The game ended after two periods of overtime.

The weather was one aspect that was rough for both sides during the game Saturday night. With a rainy night in the 50s, it was a challenge the Golden Eagles have not faced yet at Valley Fields.

“This is a tough environment to play in. I wasn’t expecting rain but I looked at the guys and everybody looked focused it didn’t seem to faze them at all,” senior goalkeeper Luis Barraza said. “Everybody was ready to put in the work and we did and we got the result.”

The night could have ended in disaster for the Golden Eagles after freshman Alan Salmeron got a red card in the 52nd minute of the game. However, Marquette was able to hold Georgetown scoreless for 58 minutes with only 10 men.

“If you would have told me at the beginning of the game we were going to be a man down, and we would get a point against Georgetown I would have said, ‘Oh great, thanks very much, I’ll take that,’” head coach Louis Bennett said.

After losing Salmeron, the Golden Eagles were forced to adjust their game plan.

The Golden Eagles’ offensive struggles continued against the Hoyas, with only three total shots on target. Although they were down a man, the offense seemed more threatening after the red card.

On the opposite side of the field, Marquette’s defense produced its second shutout of the season. Barraza got four saves while the team rest of the team only had one save. Bennett said since junior defenseman Oliver Posarelli picked up an injury and couldn’t play, freshman Josh Hancock had to come into the game despite being sick.

“It was like an uphill battle. We played (about) 70 minutes a man down and credit to our midfield and our front line as well,” Barraza said. “We had to pack it in in our half and defend the entire time. (We had to) create the chances that we could create at that point but it was always a grind. We raised up to the challenge and we came out with the point.”

The Golden Eagles are 1-1-1 in BIG EAST play. Sitting sixth in conference standings, Marquette has the same record as Xavier and Georgetown. The Golden Eagles head to Rhode Island for their matchup against Providence Oct. 6.