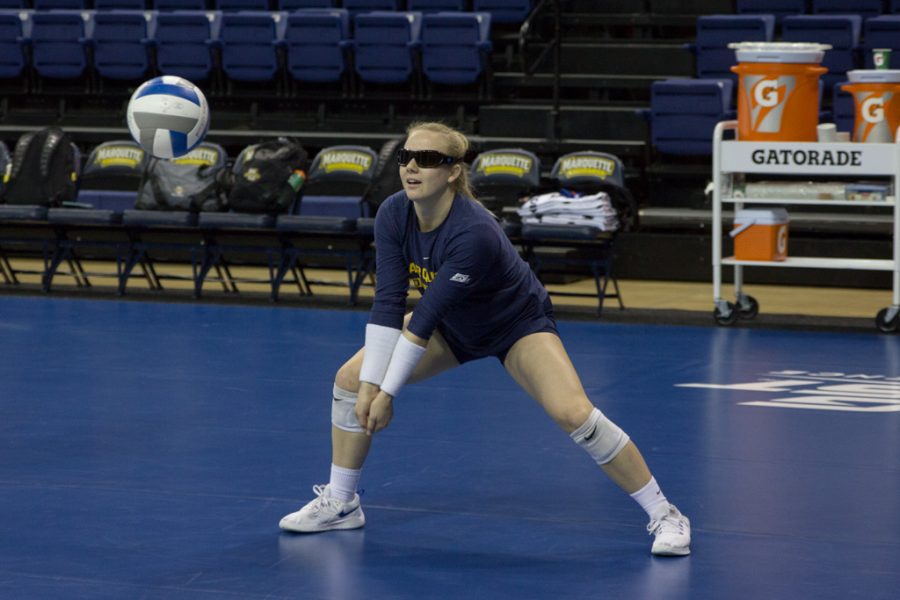 For the last year, Marquette volleyball used the same technology that NBA stars Kawhi Leonard and Stephen Curry use to improve reaction times.

This innovation is called strobe glasses. The eyewear blacks out the player’s vision in intervals, similar to a strobe light. There are different settings ranging from one to eight and A to F for some versions of the glasses.

The two people who use the glasses the majority of the time during practice and prior to matches are sophomore libero Martha Konovodoff and freshman defense specialist Katie Schoessow.

“When you put them on, they flash,” Konovodoff said. “It’s like when you go to a haunted house and inside (the lights) flash and they make it look like you can’t see for a few seconds.”

The other passers and hitters use the glasses daily, but assistant coach RJ Lengerich spends an extra 15 minutes three times a week with Konovodoff and Schoessow.

The varying levels of difficulty mean the glasses challenge most of the team. Level one is the easiest level, which is a normal strobe light. It is easier to see when the strobe light blinks faster. As the levels increase, the goggles are darker for longer, taking more vision away.

Herb Yoo is one of the founders of Senaptec, the company that sold the glasses to Marquette. According to the Senaptec website, the cost of their strobe glasses is $349. Yoo said the strobes take away what players can see, therefore restricting the information one’s brain can capture.

“It’s designed to help you to fill in the gaps, and then what that does is help your brain (to) become more efficient,” Yoo said. “When you take (the glasses off), the whole thing’s different to you, so you’re processing faster. Often when you’re doing a catching test, people will say that the ball seems like it’s in slow motion or that they see more detail on the ball.”

Senaptec has altered the initial design by having the glasses wrap around the player’s face, which gives full strobe effect both in the peripheral and central view. The lenses are improved because they are now opaque so a player can’t see through them on a sunny day. Yoo and his team also created an app that connects to the eyewear.

“You’re able to remotely control what the eyewear is doing so that you can adjust the levels and the modes. But you can also open and close the lenses on command,” Yoo said.

For the Golden Eagles, this technology is relatively new. The glasses have set Marquette apart from other collegiate volleyball programs since they are one of the first teams to integrate them into their daily training. Yoo declined to comment what other colleges have the goggles.

“It gives us something that very few other programs have,” Lengerich said. “This gives us an edge that certainly other teams in our conference don’t have. … If (the glasses) give us one point a game, that’s a huge deal because we just beat Villanova on Saturday night (in set) two 25-23. If we got one point because of these glasses, then that was a big deal.”

Yoo said Lengerich will be presenting about the Senaptec strobe glasses at a National Collegiate Athletic Association conference held in Minneapolis mid-December. Lengerich was the one who introduced this product to the Golden Eagles’ program.

“I was coaching the men’s game in Division III before I came here,” Lengerich said. “I had an assistant coach who brought them to me. … We put them on our libero, and I didn’t implement any full plan with them at the time, but I knew of them.”

When Lengerich came here, Theis gave him the financial resources to start designing a full program around the glasses. Marquette’s initial call to Senaptec was in spring 2017.

“A woman came out here and did a demo with us,” Lengerich said. “We brought two of our players out there and just said, ‘We’re thinking about these, try them on, what do you guys think?’ We liked the demo. … We decided to purchase two pairs, (and) we’ve since got one more.”

Marquette was an early adopter of the eyewear. Since then, more Division I and Division II volleyball programs called Yoo and his company to purchase Senaptec products.

Some of the professional teams that use Senaptec’s strobes include the U.S. National Volleyball team, the Seattle Seahawks, the St. Louis Cardinals, the New York Mets, the Portland Trailblazers, the Miami Heat and the Detroit Red Wings.

“That’s the beauty of the Senaptec strobe,” Yoo said. “They can purchase it, and they can integrate it into what they’re already doing. They’re not really reinventing what the practice is.”

The most effective use of the glasses is on the road because it helps speed up the transition time between getting off the bus and adjusting to a new environment.

“It really clears up my vision,” Konovodoff said. “When you go into a new gym, walking in, the lights are different than your home gym. So for me, it clears up my head a little bit and makes my reaction time better.”

Konovodoff needs to wear the glasses during warm-up 15 minutes prior to every match, otherwise she will not be prepared come first serve. She said the time it takes her eyes to recover after wearing the glasses is five minutes.

“Now I have to use the goggles before every match and if I don’t, I’m a little messed up,” Konovodoff said. “For me, it’s easy to adjust.”

Her progress with the glasses came to fruition Saturday night during the Villanova game when Lengerich said he texted her after the game about how the glasses are working.

“She said, ‘Yeah I think they are,’” Lengerich said. “I said, ‘The game has really slowed down for you.’ … Her feet are really efficient, but her eyes, she’s making really early reads. Her reaction time is far faster than it was when she got here as a freshman.”

For Marquette volleyball’s use of the glasses, Lengerich said it would be too dangerous for Konovodoff to reach level eight. But he said the team has a leveling up plan and Konovodoff has improved remarkably in just one year.

“I have no doubt that it has made her a better player today than she was a year ago and a better player now than she would have been without them,” Lengerich said. “From level one, she was barely catching tennis balls here and there and dropping a lot of them, and now she can pass balls with one arm, catch a tennis ball in the other hand and alternate.”

Lengerich said he believes that Konovodoff can only improve from here. Although level eight may not be a possibility, her competitive spirit will continue her progression with the glasses.

“I think there’s a placebo effect to it,” Lengerich said. “Martha feels more comfortable in them and she feels that she’s getting results. And if she’s confident because she’s wearing these glasses, then that’s a win for our team because so much of defense and passing in particular is confidence.”

A year after the glasses’ implementation, Konovodoff’s opinion on the glasses has changed dramatically.

“At first I absolutely dreaded doing them. I was not good at them. I was stuck on level one for a very long time,” Konovodoff said. “But now I’m staying steady at three, and I’m trying to get up to four.”