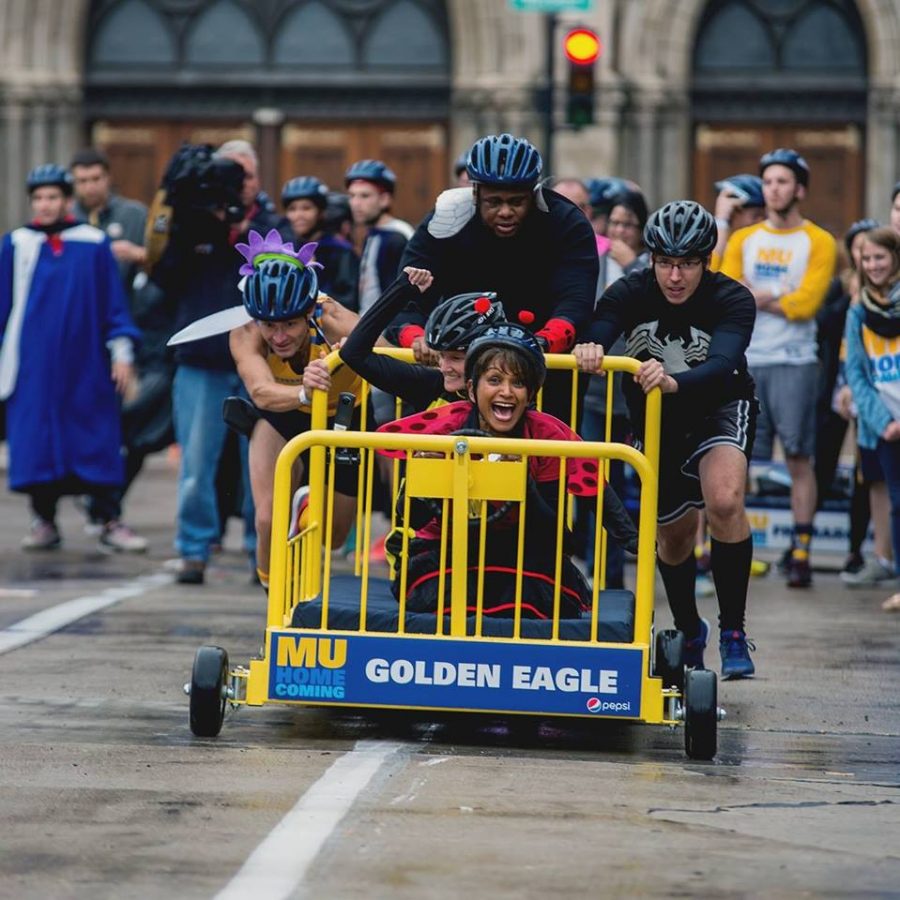 Marquette will once again host the iconic Bed Races as part of a Homecoming tradition Friday.

On 12th street between Wells Street and Wisconsin Avenue, the action happens. Teams consisting of five members put on matching costumes and compete in races, pushing a wheeled bed.

Maddie Hoss, a junior in the College of Business Administration, said that the Bed Races are in her opinion one of the most underrated events of the year. Last year, Hoss worked as a Homecoming intern for the university. She helped plan the Rock the Mall Concert, Block Party, student networking event and Bed Races. This year, Hoss is taking on a less formal role, serving as a volunteer with insight on how events need to run.

“I love the bed races, I think it’s a very underappreciated event,” Hoss said. “I think it’s a lot of fun because it is very quick so you get the competitiveness of it.”

Jacob Fuchs, a senior in the College of Engineering, loves the Bed Races as well and finds the amiable competition thrilling. He was a spectator for the competition during Marquette’s 2016 Homecoming.

“It’s a lot of fun, having both faculty and students participate is really great. I know Dr. Lovell loves it, so it’s a good way to get everyone competing in a friendly spirit,” he said.

The Bed Races are a great opportunity for the entire Marquette family to convene and interface with one another for some fun competition. Part of the enjoyment of the Bed Races, Hoss said, is the chance to compete against a variety of participants who you would usually not interact with.

“Alumni are doing it, students are doing it and staff — so they’re all super competitive and they’re competing against each other, so I think it’s a lot of fun,” Hoss said.

Nick Singleton, a senior in the College of Health Sciences, expressed his excitement to participate in his first bed race. Singleton will be racing on a team made up of members of the Student Athlete Advisory Committee, or SAAC.

“I’ve watched the bed races every year and I’ve always wanted to get involved, so when the opportunity to do the bed races with SAAC presented itself I was all about it,” he said in an email.

One of Singleton’s Bed Races teammates, Monique Felix, a senior in the College of Business Administration, is thrilled to be competing with her fellow SAAC members.

“Not sure what our team name is, but it’s made up of all SAAC members! Our costumes and theme are pretty good though, so be on the lookout for that on Friday!” she said in an email.

Adding costumes to the Bed Races created a pathway for students and staff to connect on a personal level.

For Hoss, it shed a new light on some of the staff. She enjoyed being able to see them have fun and interact with them in a less professional manner than she was used to.

For example, last year the Office of Marketing’s Bed Race team members each dressed up as a type of candy and playing on the fact that they were racing in beds, gave themselves the theme “sweet dreams.”

While costumes are a very amusing and important part of the competition, Hoss suggested Bed Races participants keep their creativity realistic.

Her pro tip is to “make sure your costumes aren’t hurting you or harming you from actually running.”

For each team of five, two participants must be on the bed while three push. This year’s bracket-style organization and the competitive climate invites opportunities for strategic planning. Hoss stated that the most common strategy is having the smallest people in the bed so that the bed is lighter and easier to push and control.

Singleton has high hopes for his team in this year’s unique competition.

“I fully expect our team to win. I won’t be mad if we don’t, but I will be disappointed,” he said.

Singleton also expressed appreciation for the students and staff that put effort into planning and creating the full schedule of Homecoming events.

“To be able to participate in Homecoming week and support all the people that make this week what it is is something I’m very excited about,” Singleton said.