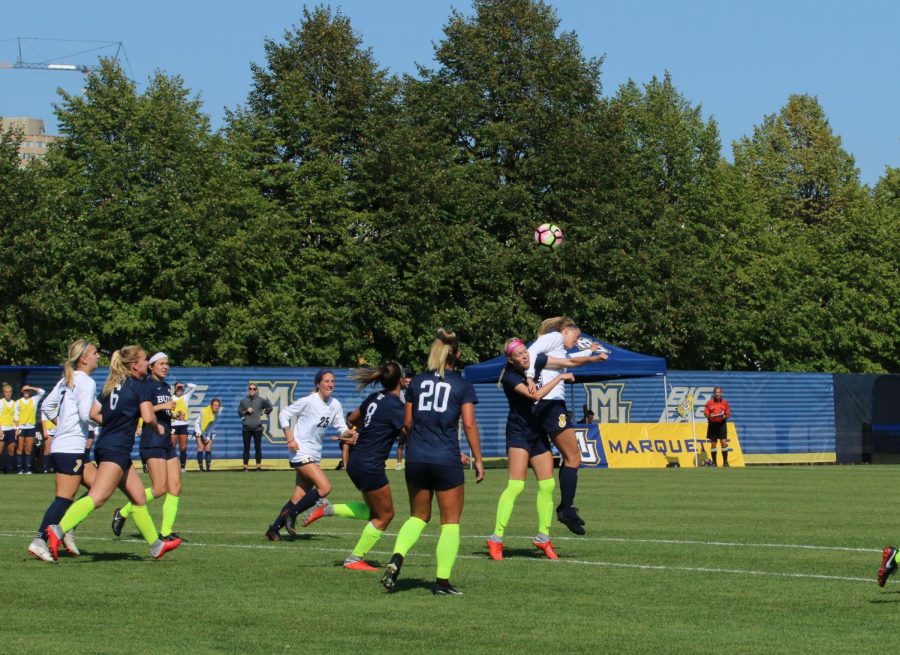 For the second time in Marquette’s 14-year tenure in the BIG EAST, the Golden Eagles walked away from its home opener with a loss, falling 1-0 to Butler.

In the 87th minute, it looked like Marquette was on its way to its second overtime finish of 2018. Allison Jacobson fired a free kick from about 25 yards out toward the goal, but a Butler player deflected the ball.

Marquette could not take advantage of the ensuing corner kick, leading to the 1-0 defeat.

“We always want to protect Valley and start the (BIG EAST) season the right way,” Marquette junior goalkeeper Maddy Henry said. “We really have to figure out internally what is going on.”

The lone Butler goal came in the 34th minute from Butler freshman forward Anja Savich. Savich had a soft touch from the middle of the box just left of a dive from Marquette goalkeeper Maddy Henry.

“I don’t think it was a goal that I personally should’ve given up,” Henry said. “That’s not one that I typically give up, and I don’t feel good about it. Getting scored on isn’t fun.”

Henry finished the day with five saves and has 54 saves through the first 10 matches this season.

“They’re a team that will slow you down in several different ways,” Vorberg said. “It kind of plays into their style.”

Despite a notable advantage in possession, Marquette could only muster two shots in the first half.

“Possession could be good or bad,” Vorberg said. “The idea is to get possession and be a little more aggressive.”

“You saw kind of a tale of two halves,” Vorberg said. “In the second half, we played with a little more urgency.”

Butler finished with a 12-9 shot advantage and a 6-2 advantage in shots on goal. Lack of offense has been a trend throughout 2018. Sunday marked Marquette’s sixth shutout of the season.

The Golden Eagles will look for its first BIG EAST win of 2018 Thursday at Villanova before returning to Valley Fields Sunday to host St. John’s.