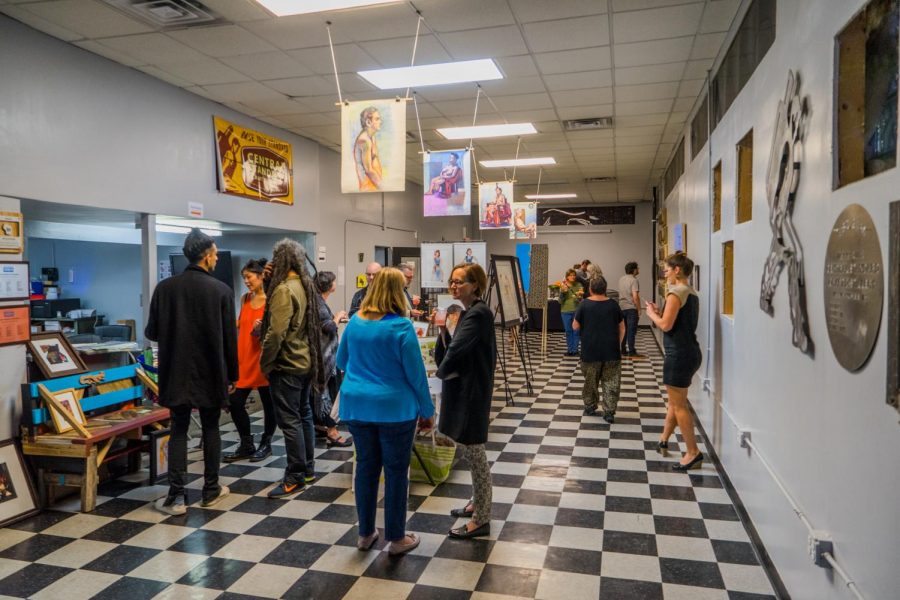 The “Crafting Art” event, hosted last Friday by the Near West Side Partners and held at the new Central Standard Distillery headquarters on Clybourn Street, raised money to benefit artists from the Near West Side and the greater Milwaukee community.

Guests came to the event to view art pieces from local artists. Featured artists and prominent members of the Near West Side community were at the event to discuss their involvement as well as the impact of the art initiative.

Tickets to attend the event were $10 at the door, and art was auctioned off to raise money for local artists.

The distillery offered free tastings of its products to guests 21 and over in a lounge area. Lisa Kaye Catering provided food for the event, and there was music courtesy of the Milwaukee Symphony Orchestra and other performances by Milwaukee collective performance group New Age Narcissism.

Julia Taylor, a volunteer and featured artist for the exhibit, said the event aimed to shed light on the Near West Side.

“We’re looking to help people who don’t know about the Near West Side to come and experience it, to understand how much creativity and fun is involved here,” Taylor said.

Along with festivities, the art exhibit is the beginning of a larger initiative to foster a safe neighborhood, Taylor said.

“We’re hoping that the proceeds help continue to fund arts initiatives on the Near West Side and that it’s not just a one-night event,” Taylor said.

Evan Hughes, co-founder of Central Standard Distillery, said he hopes to help the non-profit Near West Side Partners flourish.

“Since we moved to the neighborhood, we’re trying to do everything we can to help the Near West Side Partners because we think they’re a wonderful organization,” Hughes said.

University President Michael Lovell was in attendance and said a past history of safety issues in the neighborhood led to the formation of the Near West Side Partners, who continue to live out their mission through events like these.

“About four years ago, there were some safety incidents on campus, people having personal property stolen, even Harley-Davidson had a bullet go through one of their conference rooms,” Lovell said. “I met with the Harley-Davidson CEO and asked, ‘How can we improve the safety of our neighborhoods and our students?'”

Lovell said the Near West Side Partners are working to improve and grow the neighborhood. “Just last week, we received a $1.3 million agreement from housing and urban development, and it’s another step in helping transform the neighborhood,” he said. “The proposal came out of the university, so we’re really invested in helping the neighborhood grow and get better.”

Altenburg said the Near West Side Partners and Marquette have had a positive effect on the surrounding neighborhood.

“With President Mike Lovell’s leadership, Marquette University is helping to create a national model for how anchor institutions can play a transformational role in the economic vitality of a neighborhood,” Altenburg said.