Marian grotto under construction behind St. Joan of Arc Chapel 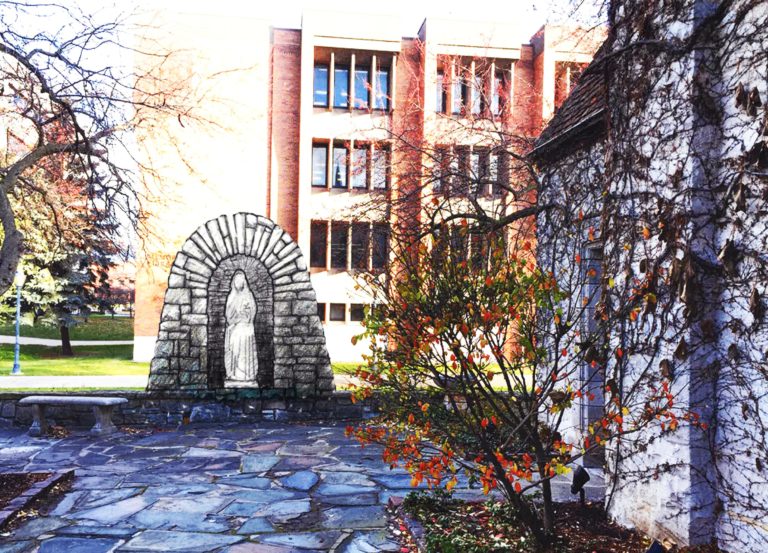 Construction on a $500,000 project began six weeks ago behind the St. Joan of Arc Chapel on a new Marian grotto. Photo courtesy of Marquette University.

Construction on a $500,000 project began six weeks ago behind the St. Joan of Arc Chapel on a new Marian grotto, which is a shrine devoted to the Virgin Mary, said Lora Strigens, vice president for planning and facilities management.

“It was entirely fundraised by a single donor … who has a strong devotion to Mary and a strong family commitment to Marquette,” Strigens said.

She said the donor is currently anonymous, but will be announced in the future.

A grotto is usually made out of elaborate stone and marble, and the statue of Mary that will be at the center of the grotto is being crafted out of marble in Italy. Local artisans are making the benches and kneelers that will fill the holy space, Strigens said.

“(The) masons working on the project have been great. They are hand-selecting each stone,” Strigens said. “We’re hopeful that by the end of the calendar year, the whole project will be completed, if not sooner.”

Located at the center of campus, the grotto will be an accessible place to reflect and pray, Strigens said. The location is designed to be prominent, but not draw attention from other religious spaces on campus, she said.

“While the Joan of Arc Chapel and other sacred spaces on campus provide other types of prayer space, the grotto will provide an outdoor space to both pray in nature and honor the Blessed Virgin Mary,” Rev. Frederick Zagone said in an email. “The grotto will offer all members of the Marquette community — students, faculty, staff and visitors — a place of prayer and quiet reflection in the midst of our busy, bustling campus.”

“Many people have a devotion to Mary, the Mother of Jesus. This devotion is prominent in the ‘Spiritual Exercises’ of St. Ignatius which provides the bases for the Jesuit tradition at Marquette,” Zagone said in an email. He said the grotto provides a specific space for this devotional prayer.

The Marian grotto is part of a campus-wide mission to create more sacred spaces on campus and increase Marquette’s Jesuit identity, Strigens said.

“I think just the mere presence of having a visual representation of Mary reminds you throughout the day as you walk by it that she is a very big part of our faith and culture here at Marquette,” Cecilia Dietzler, a sophomore in the College of Arts & Sciences who often attends daily Mass, said.

Strigens said she hopes the Marian grotto can be a place for people of all religions to relax and reflect during a busy day.

“Everyone’s got so much going on, and to have a quiet place for reflection, even if it’s just to take a quick minute and take a breath before you go into a test … is really what we wanted to … add for our campus community,” Strigens said.