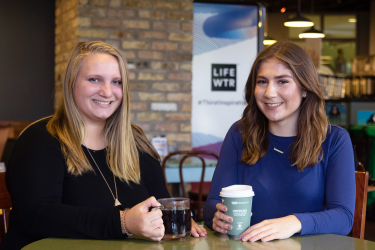 Sophomores Maddie Johnson and Laura Russell got their idea for the new Coffee Club while in line at the brew.

Both founders became coffee lovers at different times in their lives; Johnson started out at a young age, which led to a two-cups-of-coffee-a-day routine, while Russell started drinking coffee later in high school when she became a barista at her local Einstein Bros. Bagels and Caribou Coffee joint. Nonetheless, their friendship and mutual love for coffee made the start of the club inevitable.

The pair met in the summer of 2017 during their first official stay on campus for SPARK , the two-day introduction to campus event for incoming freshmen to learn about Marquette and register for classes. Last semester, they ran into each other in the line at the Straz Brew when Russell mentioned that she would love to start a coffee club on campus. Johnson eagerly agreed, and they decided to act on it.

“We texted each other later that day saying we should actually do this. … We just took it and ran,” Russell said.

Once they decided to create their own club, the long process of putting it in motion came into play. Starting any official club on campus requires certain steps to be completed.

“When we decided we wanted to do it, it took about two plus months,” Johnson said.

“We had to get signatures first to make sure people were interested, turn that form in, and from there we met with the advisers and that’s when we had to start drafting a constitution with rules,” Russell said.

Once they drafted the constitution, they had to go through a pseudo-interview process to make sure that their vision for the club aligned with Marquette’s values. Once they finalized everything, they had a meeting with the Office of Student Development and the Center for Leadership, Service and Involvement to officially approve their club.

The first meeting was September 5th at AMU 254. About 40 people showed up, and they have about 140 people on their email list, Johnson and Russell said.

One of the members, Lauren Buday, a sophomore in the College of Arts & Sciences, said she is excited about being part of a new, unique campus club.

Besides being excited for the actual club activities, Buday expressed her excitement for the club bringing together people — no matter their grades or majors — through a shared love for coffee.

The club’s next event is a study night at Colectivo Coffee on Wednesday, October 10th, where members will be able to study together while enjoying cups of coffee. On November 10th, the group has a Stone Creek Factory Tour planned.