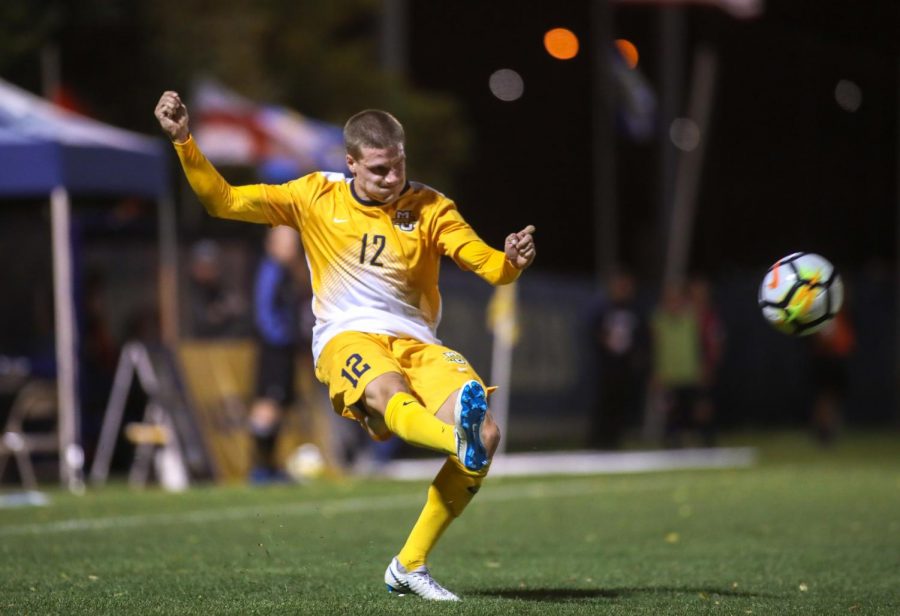 The Golden Eagles’ collection of foreign players makes them an extremely diverse team that has a huge impact on and off the field.

“It gives us that little bit of spice. It gives us diversity, and it gives us perspective,” head coach Louis Bennett said. “It’s a world game … I don’t think we would have the same feel (as a team) if we didn’t have those (international) guys.”

Coming from overseas, the adjustment period for all of these players is challenging.

“When you grow up in a country, you look more north-south than east-west, so for them, it’s an experience,” Bennett said. “Sometimes they’re homesick, and sometimes they don’t understand the culture. We try to create a culture that is user-friendly. It’s a soccer culture, it’s a Marquette culture.”

Communication in games is not a challenge for this team.

“No, (communication is) not (an issue) after a few weeks. We tell them to speak Marquette,” Bennett said. “We try not to tell them how to play. We try to give them information so that it helps them play.”

From a player’s perspective, the mentality is the same as Bennett when it comes to communicating with one another. They all speak their own universal language.

“No, (communication) never is (a problem),” German native and senior defenseman Steffen Bohm said. “We all speak the same language, which is soccer. It doesn’t matter where you’re coming from. Soccer always brings a lot of people together from all different places.”

Four of the seven international players are underclassmen, and being a senior, Bohm says he assists his younger teammates in learning the game and culture in the United States.

“I don’t force them to come to me. If they don’t need a helping hand, I don’t put them in a situation where they need to ask for it,” Bohm said. “I can give them advice here and there, but at the end of the day, it’s everyone’s own journey.”

Moving from Great Britain to the United States many years ago, Bennett has experience that helps mentor younger players, but the players mostly figure out the transition by themselves.

“America comes with its own price tag,” Bohm said. “Just the fact that the coaches have taken the same step doesn’t make it easier. It’s our own path.”

When Bennett took his own path, he did not have the benefits of current technology, making the transition a lot more difficult.

“When I came, the only way of communication was once a week by telephone. Could you imagine no internet and no real cell phones?” Bennett said. “I’ve got to be careful because I think that (the current players) have got it easy because they’re a phone call away, and you can use your phone to Skype and stuff similar to that.”

One thing that hasn’t changed about the transition to the United States is the role education and sports play together. Soccer clubs are not affiliated with universities in Europe.

“The college environment is something I didn’t know (of),” Bohm said. “We didn’t have the combination of education and sports. The opportunity to study and play soccer at a very high level is awesome.”

As well as connecting with one another on the field, the international players all spend time together as a group off the field. Some of them even live with each other.

Bohm currently lives with Manuel Cukaj and Oliver Posarelli and he says that he spends lots of his time with both his international and American teammates, creating team chemistry off of the field as well as on it.

Regardless of where the international players originate, Bennett said he believes his players will eventually start to adapt to the American culture.

“All the international players that I’ve had … I say to them, ‘You’ll think that this is not like life at home, but you’ll stay here long enough and begin to think that this might be better than home,’” Bennett said. “In America, you can do so many things that you may not be able to do in other countries.”