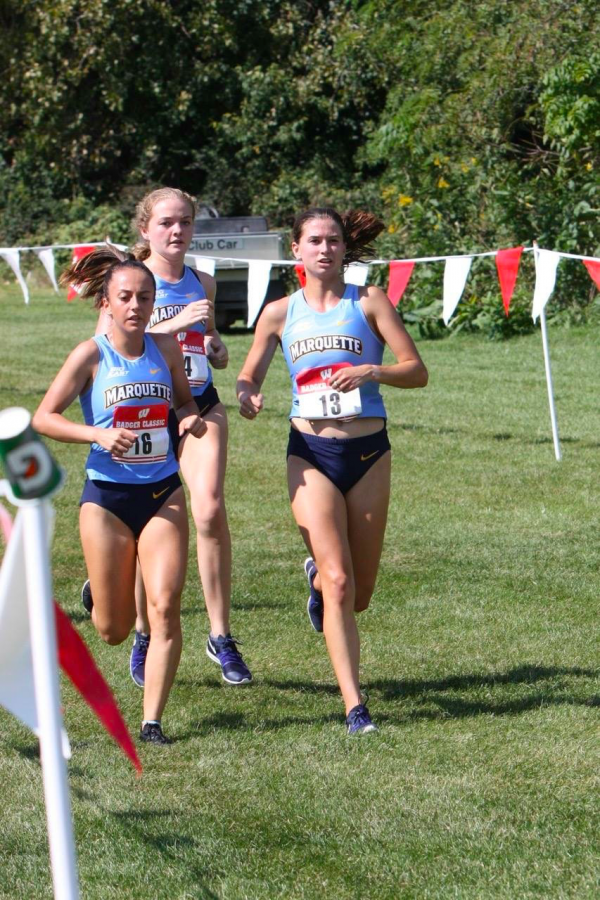 Moravec runs in the Badger Classic

The Marquette women’s cross country team has had a lot of early season success from an unlikely source: its underclassmen.

Freshmen and sophomores have earned top finishes in the first two races, and they look for improvement as the season progresses. In the Badger Classic, sophomores Emma Moravec and Emily Foley, and freshmen Kendall Pfrimmer and Lauren Neiheisel, finished in the top seven of the team standings.

“I am feeling really good about the start of the season,” Moravec said. “We put in a really good team effort at our last meet, and that makes me excited to see what we can do heading into the rest of the season.”

The transition from high school to college has been relatively smooth for Pfrimmer, a Rochester, Minnesota, native.

“So far it’s been a smooth transition, even though I am now running unfamiliar courses against unfamiliar competition,” Pfrimmer said. “The team has really helped (me) through this transition by being so supportive.”

Moravec said having a year under her belt has helped her feel more ready for the 2018 season.

“I feel a bit more prepared compared to last year because I have raced these meets before and overall have a bit more experience with collegiate cross country,” Moravec said. “Freshman year, I was nervous to race.”

Already being on the team for a year has allowed Pfrimmer to train without worrying about the transition from high school to college.

“There’s a fine line between coming into the season well-trained and over-trained,” Pfrimmer added. “However, moving into college can also encourage or teach you to improve aspects of your lifestyle such as your nutrition and work ethic.”

With the team in a rebuilding year, there are multiple underclassmen who are likely to impact the team.

“One of the best things about cross country is that every person is able to contribute to the team,” Moravec said. “We all race together, and all of us are pushing each other to be the best that we can be.”

With the changes the Marquette cross country program has seen, there is plenty of opportunity going forward. It’s just a matter of who steps up, and when.

“The MU cross country team has changed a lot since last year since we graduated many of our top runners,” Moravec said. “We, as a team, have many new faces that are stepping up, and I’m very excited to see where this season takes us.”