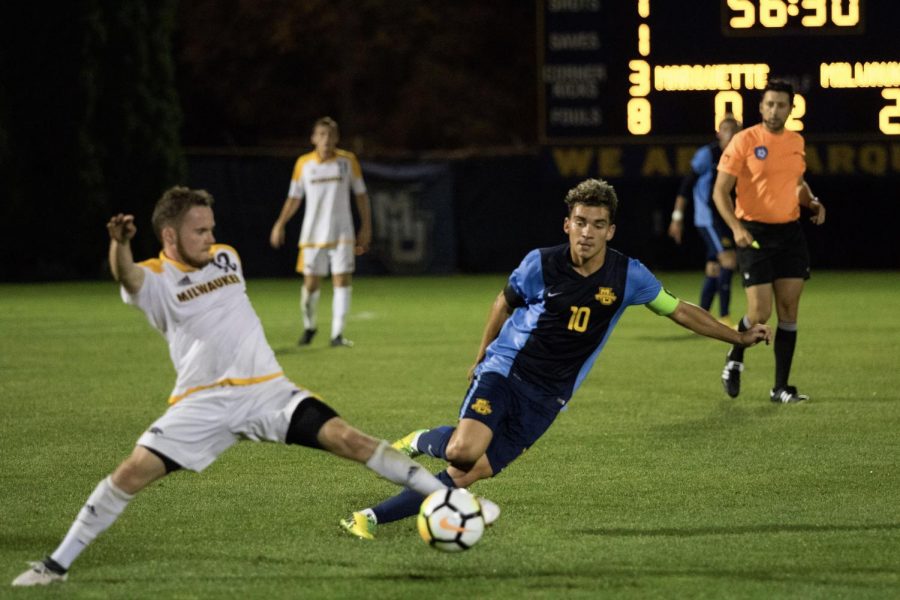 Marquette men’s soccer lost the Milwaukee Cup against the University of Wisconsin-Milwaukee for the second consecutive year, falling 2-1. Junior defender Patrick Seagrist had the lone goal for Marquette off a corner.

“We never really got into the game until we were down, but we never were really out of the game,” Marquette head coach Louis Bennett said. “It was not necessarily a high volume or a high intensity (game). It was almost like they were lulling us to sleep.”

The Golden Eagles put up 16 shots and eight shots on goal. The shots came from a variety of Marquette players. Junior forward Connor Alba led the team with five shots.

Despite the high number of shots and shots on target, the offense could only produce one goal. Seagrist is now tied for the most goals on the team with three after his strike in the 83rd minute.

“He’s very aggressive, and he’s good on set pieces because of his aggression,” Bennett said. “The position he plays and the way we allow him to get forward (allows him to) have goals and assists.”

In the seven games so far, Marquette has had two shutouts but also two games with three goals allowed.

“The defense as a whole (has) a lot to work on,” Seagrist said. “We moved the ball slowly. Our forwards didn’t have a lot of movement off the ball. We just need to focus on the next training and fix those areas.”

Along with scoring his third goal of the season, Seagrist was awarded BIG EAST Defensive Player of the Week Monday. Seagrist said he wants to create more chances off crosses, get more clean sheets and be more focused on team aspects.

Last year the Panthers defeated the Golden Eagles on their home turf, 2-0. Marquette has not defeated UWM since 2014.

“Every city has a rivalry game but this one is (a) particularly significant one in college soccer,” Bennett said.

The Golden Eagles (3-4) will take on the Seton Hall Pirates Saturday in New Jersey.

“We’re just going to focus on playing our Marquette style,” Seagrist said. “(Also) carry on the win against Villanova into the second BIG EAST game and start off strong.”