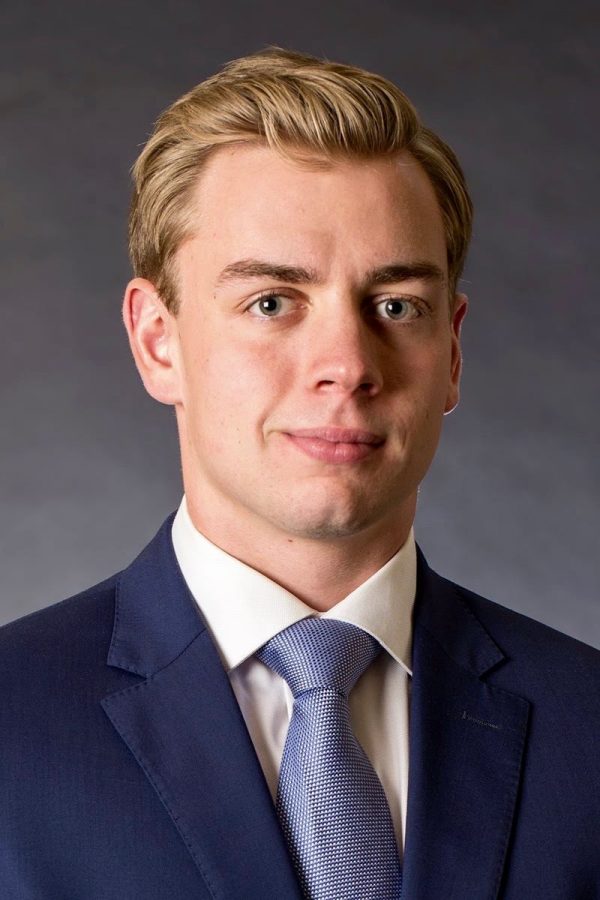 Clayton Boehm, senior in the College of Arts & Sciences, is president of the Blockchain Lab at Marquette. Photo courtesy of Clayton Boehm.

The conference is designed to bring Milwaukee businesses and students together to network and explore practical applications for blockchain technology in a variety of industries, said Clayton Boehm, a senior in the College of Arts & Sciences and president of the Marquette Blockchain Lab.

Owen Raisch, associate director of the program, said he anticipates more than 300 attendees from a wide variety of industries.

Boehm said the conference will feature two tracks. The enterprise track will focus specifically on blockchain’s application in major industries such as healthcare, finance and insurance. The entrepreneurship track, on the other hand, will focus on blockchain’s ability to create “innovative business models” and “opportunities for industry disruption,” according to the conference website.

The first blockchain, a series of identical logs that records financial transactions, was created over a decade ago with the creation of bitcoin, a form of digital currency that is most well-known for skyrocketing in price in 2017. However, many industries are beginning to realize blockchain’s potential beyond the financial sector.

Marquette launched its own Blockchain Lab in fall 2017. Davis Marklin, a senior in the College of Engineering and co-founder of Euphrates, an independent blockchain consulting firm, was one of the lab’s original founders.

Earlier this year, Marklin took over direction of the Blockchain Lab in conjunction with Alec Shaw, a 2018 Marquette alumnus. One of their first courses of action was to move the lab from the College of Business Administration into Marquette’s newly founded Student-Run Business Program.

Raisch came to Milwaukee this past summer after founding a similar program at Xavier University. He said Marquette and Xavier are two of only a couple dozen of programs of this nature in the United States, many of which are based at Ivy League schools such as Harvard or Cornell.

The Student-Run business Program currently has seven different businesses, including the Blockchain Lab, all of which are entirely student run. Raisch said the program has more real-world implications than many collegiate business programs.

Raisch said the work of putting the conference together largely fell on the staff of the Blockchain Lab who organized the conference with securing sponsorships and building a national network.

“The blockchain is (the Student-Run Business Program’s) company, but we’re genuinely entrusting the students with the responsibility of doing it,” Raisch said.

“A lot of these conferences don’t open their doors up to students,” Marklin said. “We’re bringing students from Madison, UWM, MSOE and obviously Marquette to come and learn how this technology relates to our lives.”

Raisch said the Marquette Blockchain Lab has potential to bring real value to the city of Milwaukee through the Milwaukee Blockchain Conference.

“There is a lot of buzz about blockchain, but not a lot of people that have stepped up to create genuine content,” he said. “We have an opportunity to be a player on a national level.”