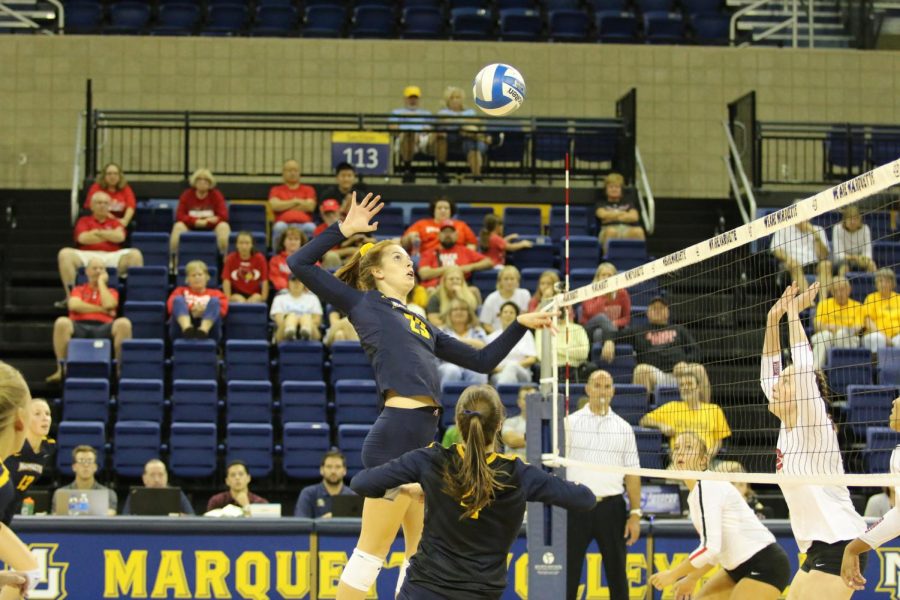 With junior setter Lauren Speckman out for the day with an injury, freshman Claire Mosher took over starting setting duties for the day.

“It was really crazy,” Mosher said about her first career start. “The coaches came to me this morning and were like, ‘One of our players is hurt, it’s going to be you doing this today.’ I was super excited, but at the same time I was so nervous because Lauren is a great setter, and there were huge shoes to fill.”

The first set of Marquette’s afternoon game was back and forth throughout. After multiple lead changes, the Golden Eagles finally won the set 25-23. Junior outside hitter Allie Barber led the way with six kills, while Mosher put up nine assists in the frame.

In the second set, Tulsa hopped out to an early 7-3 advantage. However, after an astutely timed Marquette timeout, the Golden Eagles went on an 8-0 scoring tear and took that frame 25-20.

In the third and final set, Tulsa took an early 15-9 lead with a 5-0 scoring run. But once again head coach Ryan Theis used a timeout to get his squad back into shape.

Barber led the way for Marquette in the first game with 14 kills and a clip of 0.353. Mosher certainly lived up to expectations with 19 assists. Sophomore libero Martha Konovodoff put up 24 digs.

The first set against the Redbirds was contested until the end. The Golden Eagles went down early but used a 6-1 scoring run to take the lead and win the set 25-23.

Illinois State made a huge run in the second set and got the frame all the way to set point, but Marquette stormed back with contributions from senior outside hitter Anna Haak and Mosher, the star of the day. A monstrous block and kill from Haak on consecutive plays and three huge serves from Mosher allowed the Golden Eagles to snatch the frame from the Redbirds.

“When I first went in, I was thinking ‘Oh, I have to get it in, that’s all I have to do,’” Mosher said. “Then we had a huge, huge block and I thought that there was really nothing to lose anymore.”

In the final frame of the doubleheader, Marquette used a 6-0 scoring run to secure an early lead and never vanquished it, sustaining that advantage until the scoreboard read 25-17.

In addition to rounding out the non-conference slate for Marquette, the wins also marked the 99th and 100th career wins for head coach Ryan Theis as Marquette head coach.

Now, Marquette makes the transition into BIG EAST play with a record of 9-3. One of the victories and all three losses came against teams inside the American Volleyball Coaches Association Top 25.

“We achieved some of (the preseason) goals. Not all of them, but some of them,” Theis said. “Now all of our attention turns to trying to win a BIG EAST championship.”