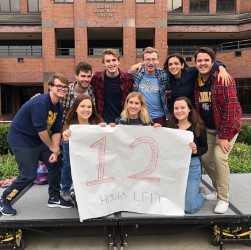 The Fugees pose for a photo at the beginning of their 12-hour performance which took place Sept. 7.

On a typical Friday night, most students would dread having to gather into a lecture hall. But one Friday a month at 9 p.m., Marquette Hall 100 overflows with students eager to watch the Studio 013 Refugee Improvisation Group, known as the Fugees for short, perform.

The Fugees, currently compiled of 10 students, draw a large crowd to watch them play improv comedy games as part of Late Night Marquette events. Sept. 7, the group had their first kick-off event of the year, a 12-hour all-night show from 6 p.m. to 6 a.m., performed outside of the Alumni Memorial Union. The group has hosted two workshops and scheduled auditions for Sept. 24 at 8 p.m. in Humphrey Hall for any students interested in joining the group.

“Our workshops (are about) just getting to know new people, learning and playing improv games,” Danny Lang, senior in the College of Communication and co-president of the Fugees, said.

The Fugees, who have been a student organization since the ’90s, got their name after they were no longer able to practice in Helfaer Theatre Studio 013, making them the Studio 013 Refugees.

The group prides itself on its lighthearted attitude.

“It’s a great environment to be in when your only goal is to make people laugh,” Lang said.

Lang, who has hopes of pursuing comedy after college, knew he wanted to be part of an on-campus comedy group when he started college.

While some of the Fugees pursue comedy off-campus and seek potential careers in the field, others participate for the pure fun of it.

Garrett Christiaens, a junior in the College of Communication, had no previous experience with comedy before joining the Fugees as a sophomore.

“I loved comedy and making people laugh, and so I thought, ‘why not give it a shot?'” he said.

He said he is glad he did.

“It’s such a great, creative and fun outlet … we have so much fun together at practice,”Christiaens said.

The group practices together four hours a week, and a key principle they work on is trust.

“When you are doing improv, especially in front of an audience, anything could happen,”Christiaens said. “So by practicing and just spending time together, we are able to trust each other and work off each other better.”

The group had ample time to work together during their 12-hour show, which retained audience members through its entire duration. Lang said, that the response to the show was great, even citing a Facebook comment, on the group’s page, suggesting a 24-hour show that took place years ago. Lang said the group tried looking into the apparent show but could not find information about it.

“I learned a lot about performing that night … from working through exhaustion to people heckling your performance,”Christiaens said.

Besides watching a talented group of peers perform, the vibe of a Fugees show is unique.  Maybe some of the fun comes from the irony of being in a lecture hall on a Friday night.

“It is such a fun atmosphere to be a part of — being with all your friends sitting in the aisles of Marquette Hall 100 on a Friday night,” Fugees fan Reilly Tracy, a sophomore in the College of Communication, said. “I look forward to the shows all week … I love starting my weekend off with one of their shows.”

Jordan McCurdy, a sophomore in the College of Health Sciences, said attending a Fugees performance is a great way to build community on campus.

“It is fun to go and support other students doing something they love. You’re just guaranteed to have a fun time,” she said.

Many of the improv games involve audience participation. The group plays games during their practices, cycling through a binder of improv games that has been passed down over the years. Lang, who is part of a Milwaukee improv group called Uncle Jesse, said he learns additional improv games there as well.

For the Fugees, the members’ chemistry while performing is due to their chemistry off stage, Christiaens said.

“It is not just about the four hours we practice together, but the times during the week when we see each other and (are) just able to hang out with each other,”Christiaens said.