Ryan Burd takes on leadership role on the course and academically

In the first two cross country competitions this season, redshirt junior Ryan Burd has finished in the top three Marquette runners. He takes on a more influential role this year both academically and on the course. 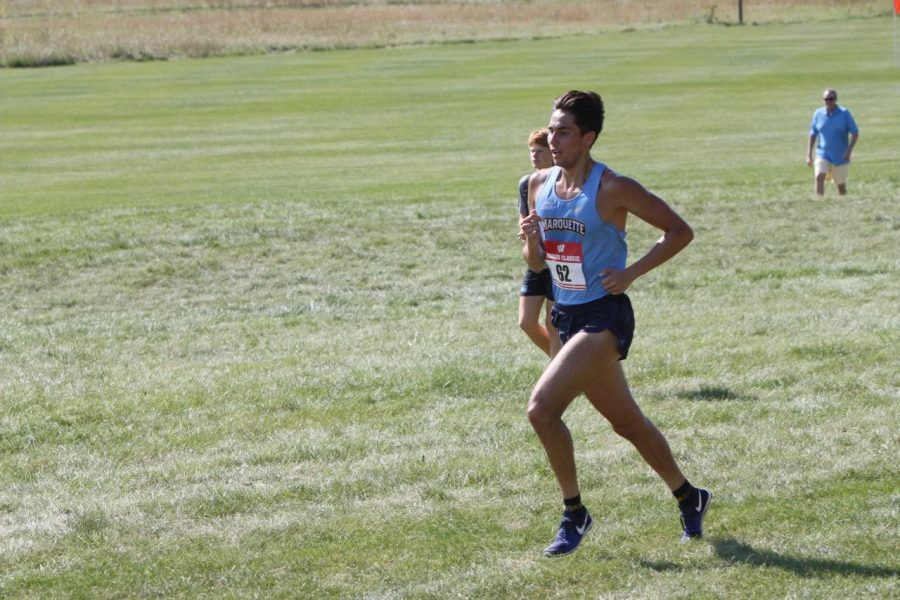 In the first two cross country competitions this season, redshirt junior Ryan Burd has finished second out of Marquette runners and seventh overall in the Vic Godfrey Open with a time of 26:00. He also finished third for the Golden Eagles and 14th overall at the Badger Classic with a time of 27:05.

Now, as he looks to improve personally, he is also accepting a bigger leadership role.

“It’s a bit surreal getting to step up and take on a more vital position as a top three runner,” Burd said. “(It’s a role) that comes with great responsibility.”

Despite his new position, he still has plenty of work to do. Having energy through the end of long races is one of the biggest keys to success.

Even in an individualistic sport, Burd said he still feels camaraderie within the program.

“Any individual can be a superstar, but a truly great cross country program is hallmarked by teams which generate trust and faith between teammates,” Burd said.

As an upperclassman finishing near the top of the men’s runners, Burd’s younger teammates tend to look to him for leadership.

Aside from the course, his teammates also count on him for academic guidance. Burd is a biological sciences major and gives advice to his fellow teammates in the College of Arts & Sciences.

“I’d like to think of myself as a leader and a mentor for the younger guys,” Burd said. “I like to support the team in any way I can within or outside of athletics.”

Burd has high aspirations for himself and the team as a whole, which are results of the work done months before the team’s first meet.

“I’m so excited to see what our team is capable of this season,” Burd said. “Everybody worked incredibly hard this summer to poise themselves for greatness, and it’s just so rewarding seeing it all pay off.”

Burd credits a lot of his success to head coach Mike Nelson. Whether it’s different racing tactics, ways to keep a good pace or just opportunities to improve, he said Nelson is always supportive. However, there are others that Burd credited for his success.

“My career would not have been as progressive nor as much fun without my teammates, staff and of course my family, who fully support my running,” Burd said.