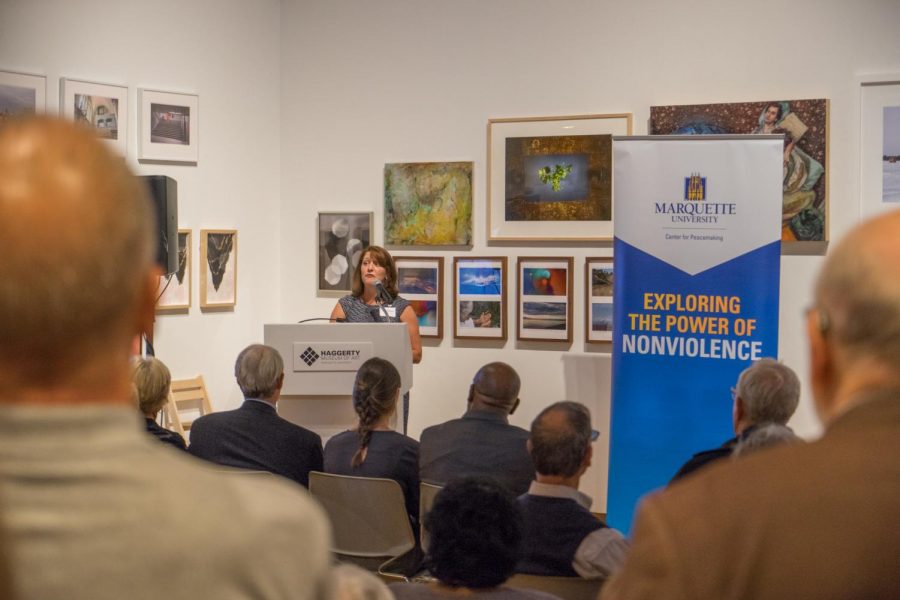 The Center for Peacemaking celebrated its 10-year anniversary  at the Haggerty Museum of Art.

The Center for Peacemaking celebrated its 10-year anniversary Sept. 13 at the Haggerty Museum of Art, marking a decade of exploring the power of nonviolence.

A reception featured speeches from founders of the center as well as members of the board of directors. A $1 million grant was announced during the ceremony to continue development work in the community.

The Center for Peacemaking was founded in 2008 through the vision of Marquette alumni Terry and Sally Rynne. The center operates several programs for students that support research promoting peace and nonviolence. It is the only such center on a Catholic university campus in the United States, Terry Rynne said.

Patrick Kennelly, director of the center and a Marquette University alumnus, said the center’s impact is clear.

“Peace education has transformed the lives of Marquette students, and Marquette peacemaking initiatives have addressed indignities and communities locally and around the globe,” Kennelly said.

Zoe Gunderson, a junior in the College of Communication said she recently started working at the Center for Peacemaking as a communications assistant.  She said she noticed the welcoming atmosphere right away.

“The students involved seem to be really dedicated and passionate about nonviolence movements and other related issues, and I’m really glad I joined,” Gunderson said.

The center also works to recruit students and build curriculum for the peace studies major and minor offered in the College of Arts & Sciences.

“Undergraduate time is a place where students can change new things,” Terry said. “It’s our call as Christians to help serve students and the power of nonviolence is just so wonderful. The number of students involved grows exponentially each year.”

During the ceremony, the center recognized its partnership with Catholic Relief Services, the official international humanitarian agency of the Catholic community in the United States.  It gives students and faculty access to the agency’s international projects, experts and resources.

Ellie Lyne, a senior in the College of Arts & Sciences and a research assistant on the Park Initiative project, which promotes reducing crime in the Near West Side neighborhoods, said learning about the power of nonviolence is beneficial and the center has taught her how to have tangible impacts on the community.

“I’ve also worked with professors over the summer to research how to solve domestic violence and eviction in Milwaukee, and we are close to reaching some answers,” she said.

Kennelly said he has witnessed graduates of the peace studies program working around the globe using skills of nonviolence learned at Marquette to address indignities and solve dense social issues.

“Our faith calls us to show love to one another and our enemies in times of crisis,” Kennelly said. “That is the mission I hope students (take away).”