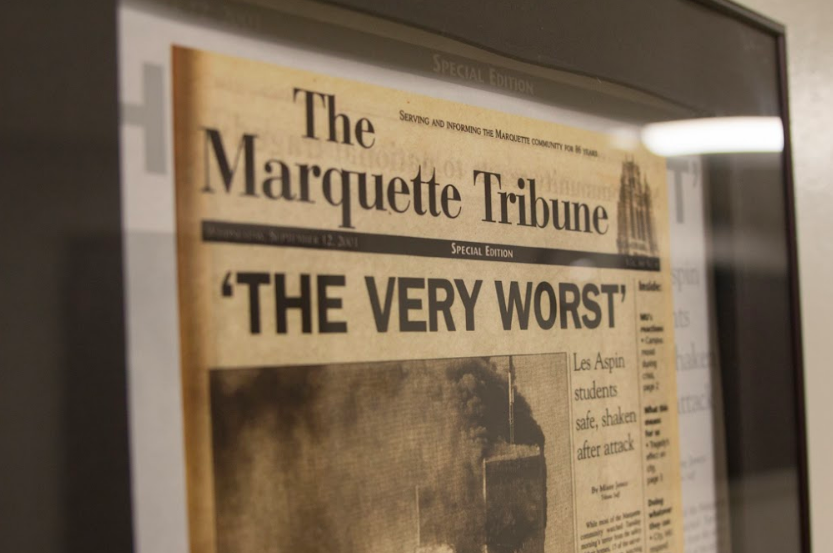 The events of Sept. 11, 2001 effected Americans from coast to coast. Parents, children, family and friends stood by unsure if they would ever see their loved ones again. On the cover of the Marquette Tribune that week, students who were studying in Washington, D.C. at the time described the terror. Students from New York spoke of their frantic calls home.

The events of Sept. 11, 2001 affected Americans from coast to coast. Parents, children, family and friends stood by unsure if they would ever see their loved ones again, for some of them, they never did.

People around the world stopped to watch the events unfurl, like time had frozen still. In the days and weeks that followed, the names of those lost were released, lives were changed forever and the country began a seemingly impossible journey toward recovery.

On the cover of the Marquette Tribune that week, students who were studying in Washington D.C. at the time described the terror. Students from New York spoke of their frantic calls home.

The Marquette community spans worldwide, and many alumni, faculty, staff, students and their families were directly impacted by the attacks.

Daniel Song, who graduated from the College of Arts & Sciences in 1990, was working in the first tower when the plane hit. A memorial mass was held on Marquette’s campus in remembrance of Song later in September.

Others, such as Robert Maze, who graduated from the College of Business Administration in 1986, had close calls with death.

“I was one of the lucky ones to walk out of the Pentagon … My office (on the) first floor took a direct hit,” Maze wrote.

Other graduates served in various roles as first responders, and would be forever scarred by what they saw that day.

Sean Jeffords, a 2000 graduate from the College of Nursing, assisted in the medical tent at the Pentagon. He was stationed at an area hospital.

Kevin Burns, who graduated from the College of Arts & Sciences in 1983, was a New York City firefighter who risked his own life to help remove people from the towers.

“In all, I had extracted about 20 people and treated 50 or so injured that day,” Burns said.

Year after year, the Marquette community has paused in one way or another to remember the day that shaped the course of world history.

The attacks shaped the way people think and act, what people choose to hold dear and the way people understand the nature of evil. For those who were young at the time, growing up in a post 9/11 world with the onset of multiple foreign wars, the resounding ripples impact everything.

The Marquette Wire has covered the aftermath over the years, highlighting pieces from those in the community who have been effected.

Ten years after 9/11, Bridget Gamble wrote a piece for the Wire about growing up in the era. She wrote, “Taped to my bedroom wall is a piece of paper that reads, ‘A lot can happen in ten years.’ A statement of the obvious. You can sail around the world in four months, earn a college degree in four years. At this point, 10 years constitutes about half of our lives. So much can happen, and at such a rapid pace that we hardly notice.”

When the current freshmen at this university enter the fall of their senior year, it will have been twenty years since 9/11. Soon, there will be students enrolled at Marquette who were born after the attacks.

Every year, members of the ROTC and other student organizations come out to put 3,000 flags in the ground on campus. This year will be no different.