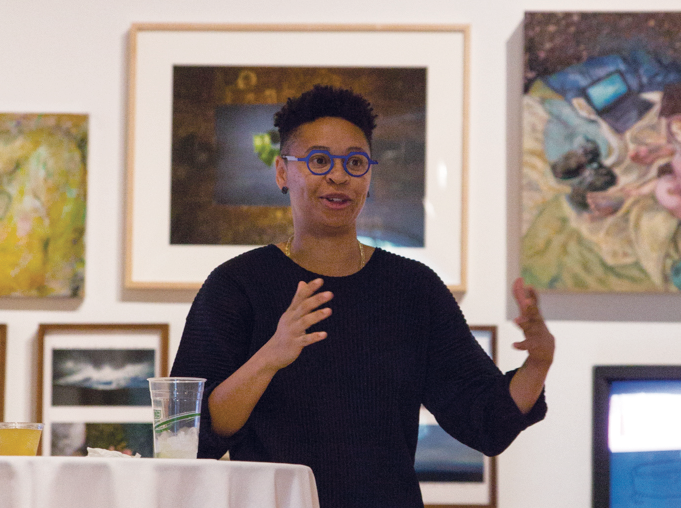 New York-based artist, Sable Elyse Smith, speaks about her experiences with the prison system and her exhibit.

Inspired by her own interactions with the prison system, artist Sable Elyse Smith questions the effects of trauma, violence and surveillance on humanity in her exhibition “Ordinary Violence,” currently on display at the Haggerty Museum of Art.

The New York-based artist, Sable has had her multi-medium works featured at the Museum of Modern Art, the New Museum and the Queens Museum, among others. Her “Ordinary Violence” exhibition came to the Haggerty Aug. 17.

Emilia Layden, curator of collections and exhibitions at the Haggerty, invited Sable to loan some of her pieces to the Haggerty after finding her work in contemporary art magazine “Artforum.” Sable’s work is a culmination of video, sculpture, photography and text. In addition to several loaned pieces, a new sculpture titled, “swear it closed, closes it,” was commissioned for the Haggerty exhibition. The sculpture is a large arch made of blue, fabricated prison tables inspired by prison visitation rooms.

“A majority of my work deals with violence, surveillance and structures of control and confinement as a larger space,” Sable said in an artist talk held Sept. 6 at the Haggerty.

In “Ordinary Violence,” Sable explores these concepts through incarceration and the prison system, which she began engaging with through visiting her father in prison during her childhood.

“I often found my body in and out of charged spaces … and after a number of years I suddenly noticed I had developed a sort of muscle memory,” Sable said.

“Ordinary Violence” further examines the effects of the internalization of small violences and restrictions on those who are within the prison space and those who simply visit.

In Layden’s opinion, Sable’s art is a necessary fit for the Haggerty.

Layden said she values Sable’s commitment to “teaching with and through art … in both formal education and informal spaces … and the interdisciplinary nature of her work.”

“We have a long history of working with teaching artists … which is important to Sable,” Layden said.

Sable came to Marquette’s campus Sept. 3 for a week of small teaching residencies in which she visited several classrooms to talk about her work. The partnership of art and education serves as a core value of the Haggerty.

“It’s great to see faculty embracing the potential of this work to enhance, deepen or add a layer of nuance to coursework,” Layden said.

Emily Smith, a sophomore in the College of Business Administration, is taking an honors seminar that explores the Milwaukee art scene, titled “The Visual Arts, Inside and Out.” During her class, Emily was able to visit Sable’s exhibition as well as hear her speak during a Q&A session.

The experience “was more first-hand and spoke to me in a way I wasn’t expecting,” Emily said.

“Art usually provokes more questions than provides answers, which is important in an academic setting … in promoting critical thinking … and different modes of inquiry,” Layden said.

Sable said she values galleries, especially in academic settings, because “it forces you, or asks you, to think a little deeper and to question your assumptions.”

Steve Angeli, an attendee at Sable’s exhibition, felt overwhelmed by the many points Sable made during her talk.

“I’m going to take a while to process it and talk to others to understand it,” Angeli said.

Angeli’s engagement with the exhibition outside of the museum is just what Sable intended.

“It’s not just about my voice. It’s about me suggesting things and everyone bringing their own experiences … and continuing the show,” Sable explained.

“The Haggerty is here to support teaching and learning on campus,” Layden said. She said she hopes this educational growth will help viewers change perspectives and the ways they think.

While she had thought about the effect of prison on those inside of it before, Emily said she “never considered what it might do to the people surrounding it.”

Viewing Sable’s work helped increase her awareness of the world around her.

With Sable’s use of video, sculpture, photography and writing, the interdisciplinary nature of art is especially present in “Ordinary Violence,” which will be on display until Jan. 27, 2019, allowing the Marquette community in all academic fields to think and rethink.