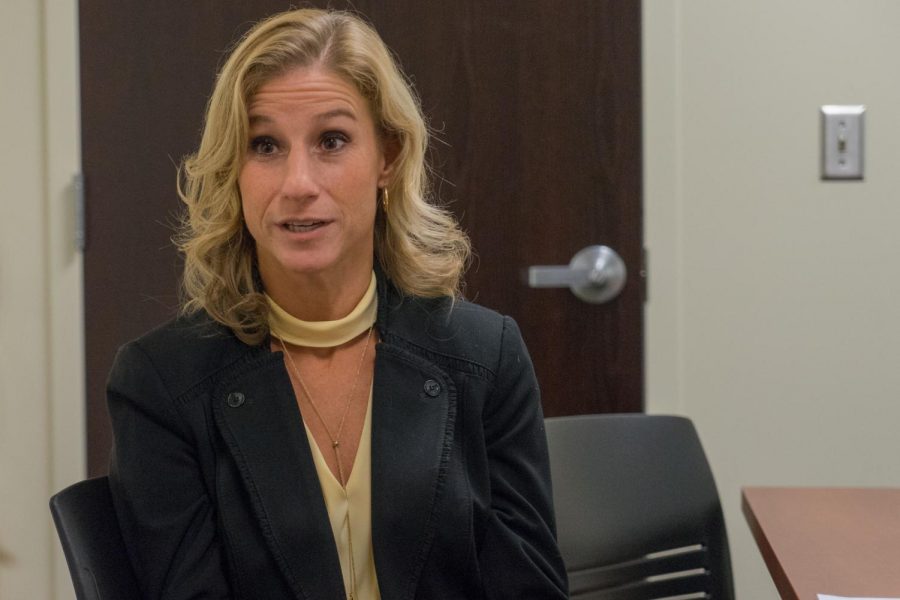 Cara Brook Hardin serves as the interim Title IX Coordinator as the committee searches for someone to fill the position permanently.

“We have advertised (the position) pretty heavily both in the higher education community and in the legal community, especially in Wisconsin,” Welburn said.

The Title IX coordinator is a position required at universities that receive federal funding, according to the Department of Education’s resource guide. It is the university’s head position in the Title IX Office.

A university’s designated Title IX coordinator oversees university compliance with the Education Amendments of 1972, which prohibits sex-based discrimination such as sexual harassment or misconduct.

Taylor served since May 2015 as the university’s first full-time Title IX coordinator, university spokesperson Chris Jenkins said. Before that, Marya Leatherwood held the position since December 2014, but Jenkins said she assumed other responsibilities as well.

“As Marquette evolved, we saw that become a permanent, full-time position where that’s the person’s only responsibility,” Jenkins said.

Taylor said she decided to leave Marquette after receiving an offer for a position at Wichita State University in Kansas. She currently serves as the director of institutional equity and compliance, ensuring that WSU follows federal and state laws and regulations to ensure equal rights and non-discrimination.

“My experience at Marquette has been very valuable in assessing Wichita State University’s current policies and processes,” Taylor said in an email.

Hardin said she is not sure whether she will seek the Title IX coordinator position permanently.

Hardin currently works remotely from her home in Iowa, where her husband works at Drake University in Des Moines. She said she is on campus a couple times a month.

“It works because we are set up with full video capability, so when I say I have an open door policy, any student, faculty or staff member could walk in and be on the screen with me,” Hardin said.

Hardin began working remotely last year.  Before her husband got his job in Iowa, she lived in Milwaukee, working on campus regularly since becoming a deputy Title IX coordinator in August 2015.

Prior to her Marquette role, Hardin said she worked as a defense attorney handling employment discrimination cases. She said she also worked in the special victims unit at the prosecutor’s office in St. Joseph County, Indiana.

Hardin said she then worked in the general counsel’s office at Ball State University in Muncie, Indiana, handling employment matters and advising the institution on Title IX compliance.

“Both my parents were in the legal profession, so I’m pretty sure I didn’t know there was anything else out there,” Hardin said. “I have both (defense and prosecution) backgrounds that contribute to my ability to be neutral and objective in any investigation.”

Welburn said Hardin’s depth of experience makes her the best person for the interim role.

“She has tremendous credentials and background that’s really ideal for this,” Welburn said.

Taylor said Hardin is a trusted leader who will provide a neutral and thorough approach to everything she does.

“Cara brings a wealth of experience as she has been the lead investigator for the majority of investigations during her three years as the deputy Title IX coordinator,” Taylor said in an email.

If she chooses to pursue the Title IX coordinator position, Hardin said the search committee will have to consider her off-campus status.

“Marquette was gracious enough to allow me to remain in this role and to try out a remote basis, which has actually worked quite well in my opinion,” Hardin said. “We would need to explore how (the permanent Title IX coordinator position) would work if I’m not on campus on a daily basis.”

Hardin said she will likely transition back to her deputy role once a permanent Title IX coordinator is selected by the search committee.

Welburn said the committee, which he chairs, is small and composed of the university’s general counsel, employees from advocacy services, additional faculty members and Hardin.

Jenkins said she brings an important perspective to the search committee’s meetings.

The committee will begin reviewing applications for Title IX coordinator before the end of this month, Welburn said.

“I do not imagine a lot of institutions around the country are looking for Title IX coordinators right now, and I do not imagine that we’re going to wait until we get 100 applications,” Welburn said.

With Hardin filling the interim position, Welburn said the search committee can take its time during the hiring process.

“It’s not urgent that we get someone right now,” Welburn said. “We have the ability to hire the right person for this job — to hire the very best person. We are not in a rush and will just not take anyone except the person who … (will) not require an enormous amount of training.”

Hardin said it can be challenging without a full five-person team in the Title IX office.

“I haven’t had a problem dealing with it, but I work lots of hours and people here at the university may receive an email at 11 p.m. at night,” Hardin said. “So, that’s been fine to navigate, it’s just a little bit more stressful.”

Despite the added responsibilities, Hardin said university members reached out in support.

“(University members) know we are down a person in our office,” Hardin said. “Everybody has offered to help, offered to collaborate, have reached out to me and said, ‘Hey, what can we do to help?’ … So that’s been a great thing.”

Hardin said she hopes to develop partnerships and collaborate with more people on campus.

“Combatting sexual harassment and sexual misconduct is a community goal, and we are all in this together,” Hardin said.

Student listening sessions, like those held for the Marquette University Police Department chief, are not planned by the Title IX coordinator search committee, Welburn said.

“That’s something that we’re going to have to discuss in committee,” Welburn said. “I know already that some people who are applying are concerned about confidentiality.”

Students, faculty and staff can find information about Title IX resources and contacts online or by downloading the Reach Out app, which launched two years ago as a resource guide.

Advocacy services are also available for victims who require immediate support, Welburn said. Hardin said she only meets with students who want to discuss the complaint process, or if they want a full investigation into their case.

“When we make a decision (on a permanent Title IX coordinator), we’ll roll that out as soon as we can,” Jenkins said.