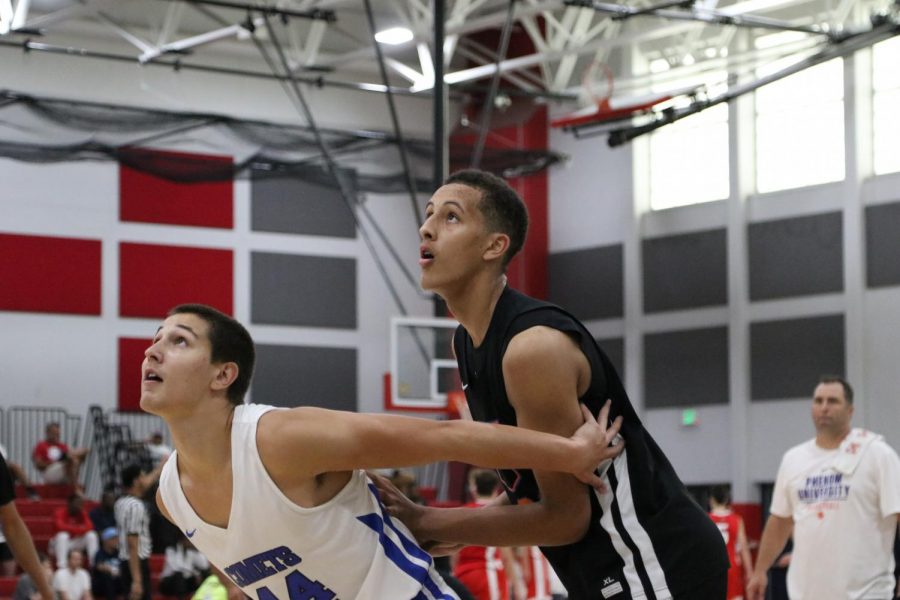 Patrick Baldwin Jr. (right) goes for a rebound during the NY2LA Summer Jam in July.

As Marquette men’s basketball recruits Patrick Baldwin, Jr., the top prospect in the 2021 class in ESPN’s rankings, their pitch goes beyond just what Baldwin can bring to the Golden Eagles.

That entire team is Phenom University, a team in Nike’s Elite Youth Basketball League comprised entirely of high school aged players in the state of Wisconsin.

“We annually in Wisconsin have a lot of talent up and down the board,” Phenom University coach Antonio Curro said. “It’s just these are a different group of kids that came together, bought in on one goal to try to be as good as they can be, be unselfish (and) try to take on some leadership and accountability.”

Watching a Phenom University game is like one-stop shopping for Marquette’s staff in the July evaluation periods. Baldwin and teammates Jalen Johnson, Jamari Sibley and Reece Beekman all have offers from head coach Steve Wojciechowski and his staff. Teammate Desmond Polk has also received significant interest.

The pool of talent came together quickly. Players flocked from programs on the Nike, Adidas and Under Armour circuits between travel seasons to establish a Wisconsin-oriented elite travel team.

Many of the teammates have already bought into the idea of playing with each other at the next level at Marquette or another school.

Baldwin said he would definitely like to play alongside his summer basketball teammates. “There are definitely a lot of people I would like to team up with for college, wherever that is,” he said.

“You know how we win now,” Sibley said. “We could go to the championship round together. Be the best team in college. We just want to make history.”

Baldwin is a more reserved and humble recruit and as he considers dozens of colleges, having a school in common with so many of his teammates has been helpful.

“I could talk it over,” Baldwin said. “There are definitely some similarities, so I can definitely run some ideas off of people.”

While each player has an individual recruitment, the team mentality has seeped into the recruiting process. At the end of June, Marquette hosted Baldwin, Sibley, Beekman, Polk, Carter Gilmore and David Joplin for unofficial visits together.

As part of the recruitment, they all visited the Fiserv Forum.

“They took us to the new Bucks arena, and it was real nice,” Beekman said. “It was a good experience to go check them out … It would be nice, the brand new feeling of a new court.”

“I really liked the campus. We got the chance to look at the new arena and everything there,” Polk said.

While Marquette is not allowed to comment on specific recruits, athletic director Bill Scholl said he expects the new arena to have a big impact on recruiting.

“It’s a significant step forward for us,” Scholl said. “The recruiting business is incredibly competitive … To be able to walk them into an arena that I believe is as nice as there is in the world, it speaks to how important basketball is to us, but it also speaks to the experience they can have here.”

Trying to sign almost an entire travel team is not such an easy operation, however. Each player is primarily making decisions based on what’s best for them, Curro said. Playing together is a bonus.

And plenty of other schools are recruiting multiple players on Phenom University. Duke offered scholarships to Johnson and Baldwin a couple days apart from each other in July.

Arizona State offered Johnson, Baldwin, Beekman and Sibley. Minnesota and Kansas State have offers out to all five of Marquette’s main targets on the team.

Baldwin may have the opportunity to play with almost his entire summer basketball team at Marquette, but 15 schools from the six major college basketball conferences have offered him, and blue bloods like Kansas and Kentucky are watching.

“He can do anything really. That’s what’s most impressive to me,” Johnson said. “His shooting is crazy. It’s just scary to see that he’s only 15 years old. Once he gets 18, it’s going to be crazy.”