Jazz in the Park wraps up until next summer 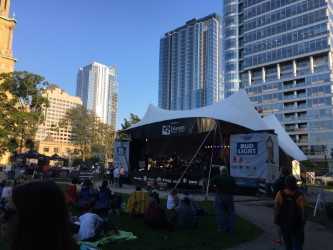 Thursday marked the final Jazz in the Park event of 2018. The summer concert series will return in May of 2019.

While some students head back to their hometowns for the summer, leaving deserted dorm rooms and a rather quiet campus in their wake, others nestle into Milwaukee and make lists of what to do around the city. For music lovers and social seekers alike, Jazz in the Park makes that list.

Every Thursday from late May to late August, East Town Association’s weekly summer concert series draws in thousands of people looking to enjoy music and take advantage of Milwaukee’s free amenities. Families, friends, neighbors and tourists gather in Cathedral Square Park, set up lawn chairs and picnic blankets, bring food and drink and enjoy the free live music. The event runs each week of the summer from 5-9 P.M., with happy hour from the vendors starting at 5 and the live music beginning at 6.

“(Jazz in the Park) was originally intended to be just a community concert, and it started out very small, just to bring the community together,” Kim Morris, the executive director of East Town Association, said. “It’s grown from … probably a hundred people to usually three, four, five thousand people each week.”

Morris, who has been working with East Town Association for the past eight years, said the weekly event draws the largest crowds at the beginning of the summer, when everyone gets antsy for reasons to enjoy the weather. Nonetheless, this past Thursday’s concert wrapped up Jazz in the Park’s 27th year of the series and still had Cathedral Square absolutely packed.

Shelby Cullinan, a junior in the College of Engineering, attended Jazz in the Park with friends twice this summer. Cullinan grew up listening to jazz music, playing clarinet, bass clarinet, baritone saxophone and tenor saxophone in school band for multiple years. While he has an appreciation for jazz, Cullinan liked going to the concert regardless of what band was playing and what genre was being played, enjoying the opportunity for a change of atmosphere from campus.

“It’s good to grab, like, a picnic blanket, a couple of friends,” Cullinan said. “It can either be a listening experience, or it can kind of be a nice atmosphere, with jazz kind of in the background, and everyone socializing … it’s fun no matter which way you do it.”

While not a particular fan of jazz music, Lara Emmendorfer, a junior in the College of Nursing, said she enjoyed going to Jazz in the Park with friends this summer to socialize and people-watch.

“It’s really fun because there’s, like, families with little kids, there’s elderly people, middle-aged people who are dancing up at the front of the stage, and a lot of people bring their dogs,” she said. “You kind of get to see a lot of, like, what Milwaukee is and who lives in Milwaukee.”

Besides Jazz in the Park, summertime in the East Town neighborhood of Milwaukee includes other exciting events: Bastille Days, the four-day French festival that closes down city streets and offers food, drink, music, entertainment, shops and all things French; Firkin Fest, a one-day beer festival featuring a wide variety of brews to sample; and the Cathedral Square Market, a bustling farmer’s market each Saturday morning of summer and early fall, full of local vendors.

Emmendorfer said experiencing Jazz in the Park and East Town neighborhood events were pivotal to her summer experience in Milwaukee.

“I’m from a smaller town, so it’s fun to see what a bigger city has to offer,” Emmendorfer said. “I never had a weekend (this summer) where I had nothing to do.”

Robbie Lauer, a sophomore in the College of Arts & Sciences, has lived in Milwaukee his entire life yet attended Jazz in the Park for the first time this summer.

Lauer said going to the concert helped increase his appreciation for jazz and live music in general. And while this year’s summer concert series has officially ended, Lauer said he intends to live on campus next summer, bring his friends to Jazz in the Park and share all that he has discovered from summers in the city.

“With Marquette students, I think there’s definitely a draw to stay on campus, and kind of just stay in the Marquette bubble,” Lauer said. “But I think it’s very important for students to get outside and experience what the city has to offer because it’s really rich and diverse, and not only will you learn about the city, but also your own interests and hopefully something about yourself.”

Jazz-lovers and curious summertime residents alike can find several other live music opportunities to enjoy in Milwaukee. The Brew City boasts not only Summerfest but West Town’s River Rhythms on Wednesday nights, Bayview’s Chill on the Hill on Tuesday nights, and Thursday nights in Cathedral Square, East Town’s Jazz in the Park.