Behind The Badge: Lt. Jill Weisensel 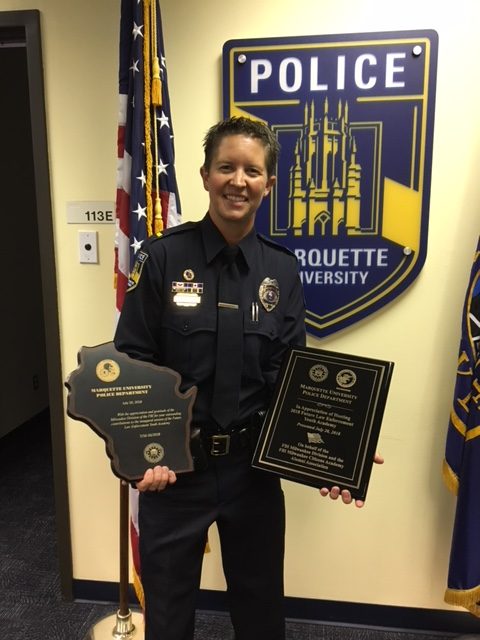 After spending 14 years as a dedicated officer at the university, Marquette University Police Department Lt. Jill Weisensel still operates with the same zeal she had from the day she started her work.

Weisensel said she’s always been inspired to work as a police officer.

“Ever since I was a little kid, I knew that this was something I wanted to do … like any officer here, I felt like I was born to do it,” Weisensel said.

Capt. Jeff Kranz said that Weisensel is an excellent example of leadership at MUPD.

No matter what she’s called to do, Weisensel said she gives it her full effort and attention.

“You’re never off duty,” Weisensel said. “It’s my job and my calling.”

Weisensel said she is a fan of country music, fishing and spending time with her dogs.

Ever since she finished her master’s degree at Marquette, she said she felt that she couldn’t leave the community.

“If it weren’t for the values like cura personalis and ‘be where you serve,’ I wouldn’t have stayed,” Weisensel said.

Weisensel is the department’s instructor for self-defense and safety skills classes offered to university faculty and students.

“I don’t think there was ever a time that a club or organization reached out to us where we didn’t send out an officer,” Weisensel said.

Whether it be directing traffic and welcoming freshmen, or facilitating a variety of safety and educational programs, Weisensel said MUPD has many programs in place to connect with Marquette students. Freshmen during orientation may have noticed Weisensel serving as the MC at the pep rally.

“(She) has shown a selfless dedication to promoting community policing despite the current climate in regards to the profession,” Perkins said.

The adverse climate and modern opinion of police officers is something that both Weisensel and Perkins mentioned as a hard reality within their line of work.

Weisensel said the hardest part of the job is more than just late shifts and difficult calls made; she said officers feel that everything they do is scrutinized.

“A lot of people don’t know what we go through,” Weisensel said. “Despite so much negative media attention, there are so many positive things we do every day.”

Weisensel said she believes every interaction with the public is a chance to build trust.

Weisensel said MUPD operates smoothly because of its efficient officers.

“There’s a lot of amazing officers … no matter what their role is, it takes every part of the team to make things happen,” Weisensel said.

Perkins said Weisensel cares about her job, as well as the wellbeing of the Marquette community.

“It is rare that an officer at her rank is out patrolling the streets and responding to calls, but Lt. Weisensel straps on her boots and hits the pavement … [she] continues to show strength as a leader, an instructor and an officer,” Perkins said.