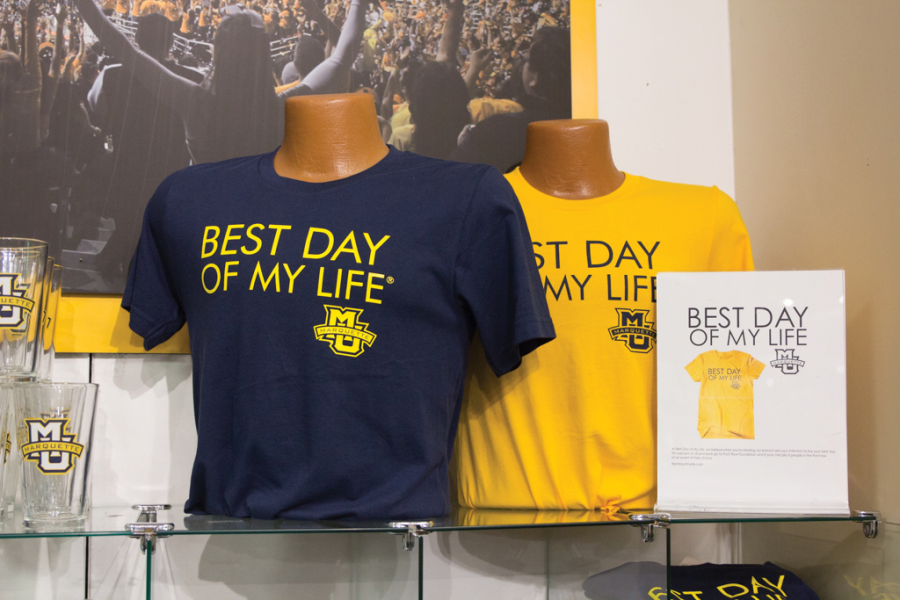 Best Day of My Life T-shirts are intended to spread positivity on campus.

Mark Boreen, a 2007 College of Business Administration graduate, is hoping to make an impact on the current Marquette community through an article of clothing. His method? Introducing Best Day of My Life T-shirts to the Marquette Spirit Shop, bringing the company’s optimistic products back to the place they began.

What started as a phrase shared between friends has now become a company with an aim to inspire others to pursue the best day of their lives. Boreen and four of his friends — fellow 2007 College of Business Administration graduate Evan Keller — began using the phrase when asked how their days were going; something Boreen called “attempts to break normalcy.”

However, what began as a simple response quickly turned into much more.

“A friend made a T-shirt with the phrase on it as a joke,” Boreen said. But the shirt quickly solicited a lot of attention.

Friends, family members and strangers alike began approaching the boys with questions about where the shirt was from and what it meant, with some inquirers even choosing to open up about the best days of their own lives. The friends soon realized the potential of their T-shirts and began building their company.

“It was about creating something with a purpose … starting a movement,” Tony Carlston, owner of Best Day of My Life, said.

Initially launched in 2013 with crowdfunding campaign Indiegogo, Best Day of My Life was put on hold due to busy schedules until four months ago. Though some of the company’s members changed in the relaunch, the message remains the same: go out and live the best day of your life.

When Best Day of My Life reached out to Marquette, the Spirit Shop was eager to work with the company and became its first collegiate partner.

“We are always interested in alumni-created companies and support their mission,” Jim Graebert, senior director of the Spirit Shop said.

As for the inspiration for partnering with the Spirit Shop, Boreen said, “I found that Best Day of My Life mentality at Marquette and wanted to give it back.”

The T-shirts, which were welcomed into the Spirit Shop in August, come in navy, gold or gray and are complete with the Marquette logo. The shirts also come with instructions broken down into four simple steps: “Wear the shirt, have the best day of your life, take a picture and share it on Facebook or Instagram.”

Since relaunching, Best Day of My Life gathered a considerable social media following. Some followers wear Best Day of My Life apparel at the tops of mountains, to graduation or while running a marathon, and others wear them on any given day in hopes that their day will be anything but ordinary.

“That is the beauty of it: there is a variety of ways to go about it,” Boreen said.

The company’s mission to spread positivity and live life to the fullest is one they said they take seriously and that goes beyond just T-shirts. Best Day of My Life gives 10 percent of its proceeds to the Front Row Foundation, which provides individuals living with critical illnesses tickets to see their favorite team, musician or play from the front row. Boreen said the philanthropic efforts are particularly tied to campus.

“I had the most ideal college experience at Marquette,” Boreen said. “It developed me as a person and I still live by its values.”

It is a meaningful experience Boreen and his friends aim to share with students through their shirts, letting the community know that whether it’s through purchasing a shirt or simply living out core Jesuit values, students might just find they can experience the best day of their lives right here at Marquette.