HARRINGTON: Medicare for All

A Fight Worth Fighting ... and Winning 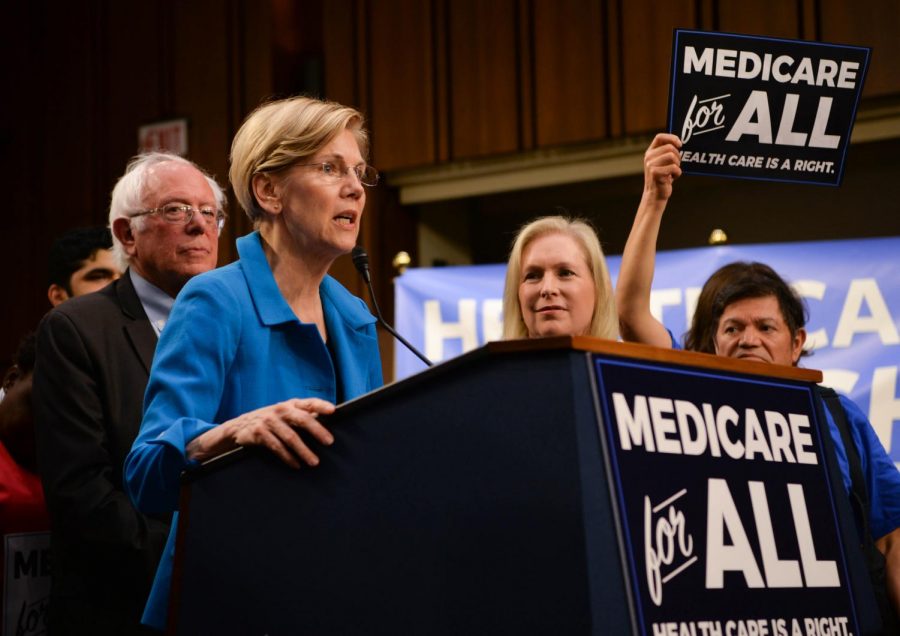 Elizabeth Warren, a senator from Massachusetts, speaks about legislation regarding Medicare For All at a Sept. 13 event.

The 2018 midterm elections are quickly approaching, and the American left has one policy arena potentially locked down: healthcare. More specifically, the party’s growing support for Medicare for All. The results of these elections will have significant impacts on the Trump administration as well as the future of the Democratic party. The American left is gaining steam by focusing on winnable policy battles.

A particularly potent element of this 2018 strategy: growing support for Medicare for All. It is a policy that not only benefits the American public but symbolizes the commitment of the United States to the pursuit of health justice. In a divisive time in American politics, Democrats have a platform that can secure serious victories come midterms if handled properly.

The Trump administration’s warpath to destroy the Affordable Care Act, or “Obamacare,” gives progressively-minded candidates a golden ticket of sorts. The strategy of “repeal and replace” is now a “gut and run” approach. The Trump administration has not fully erased the gains of the Obama years, but premium prices have surged under the 45th president.

The growing number of Congress members pushing for healthcare reform is one of the most reassuring elements of this election cycle. The normalization of leftist policies is a massive victory for the American political system. The support of mainstream politicians such as Corey Booker is a signal that these ideas are campaign winners.

Healthcare woes, including high premiums and poor coverage, can no longer be swept under the rug as failures of the Obama administration by Republican candidates.

If Democrats have any intentions of taking the House of Representatives, healthcare’s importance as a human right and reform of the American healthcare system need to be prominent in their platforms. With over 85 percent of Democrats and 52 percent of Republicans in favor of some form of single-payer plan, a lasting and concrete future for affordable, quality care is within reach.

A major failing of the Democrats in 2016 was focusing on more skeptical, conservative voters at the expense of support from their allies on the left. However, with a majority of Republicans supporting some form of single-payer healthcare system, Democrats can score big with their own base as well as with those across the aisle.

With a myriad of national issues like comprehensive immigration reform, foreign trade policy and education as unpredictable factors in midterms, there’s a unifying element present behind Medicare for All that feels reminiscent of hope.

Young voters with potentially limited exposure to the healthcare system are going to play important roles in the outcome of the midterm elections. Electrified by the never-ending parade of mass shootings and human rights violations, the youth are ready for change—not only in representation, but through policies as well.

By investing in affordable health care, Americans are securing a future for their nation. The alleviation of economic anxiety and medical distress is an undeniable good. Sustained support for Medicare for All represents something greater than simple red and blue states.