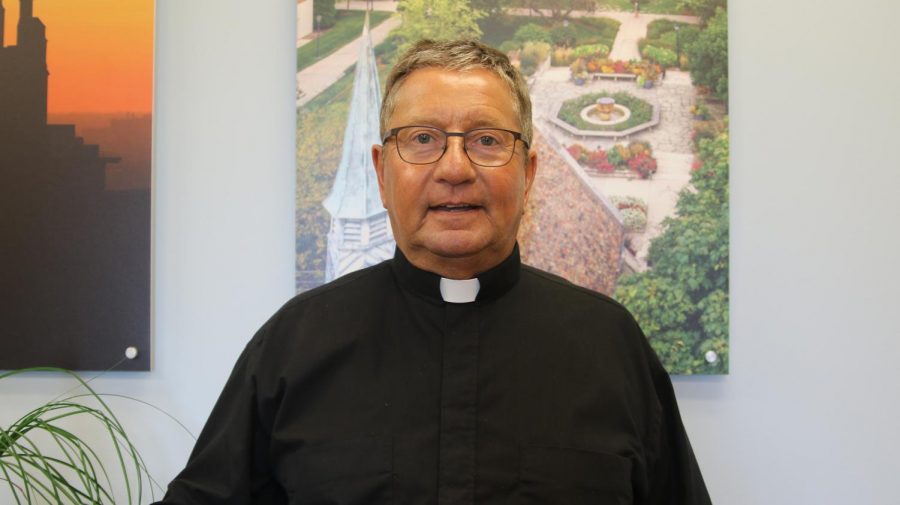 Rev. Frederick Zagone began his new position as acting vice president for Mission and Ministry at the beginning of this semester.

Zagone originally came to Marquette 20 years ago to assist with fundraising for Raynor Libraries, and was named the assistant to the vice president for University Advancement after spending two years at the university. He served as minister of the Jesuit Residence for two years and serves as a Jesuit in Residence in Humphrey Hall.

As the first Jesuit in his family, Zagone said he originally knew very little about the Jesuits.

“Forty years ago last week, I walked into the Campus Ministry office at Loyola Chicago and it really transformed my world,” Zagone said.

He said he originally wanted to be a Diocesan priest, but he said after receiving four years of education from Loyola University Chicago and the University of San Francisco, he knew he wanted to live out his priesthood as a Jesuit.

Zagone was ordained in 1993. During this time, he engaged in studies related to Campus Ministry and student affairs. After his ordainment, he worked in fundraising at the University of Scranton for five years before coming to Marquette.

Zagone oversees the Office of Campus Ministry, the Faber Center for Ignatian Spirituality, the Institute for Catholic Educational Leadership and the pastoral leadership program. He also works closely with the Center for Peacemaking.

In his new position, Zagone said he aims to uphold the Office of Mission and Ministry’s Ignatian practices in conjunction with the four pillars of Marquette’s identity: excellence, faith, leadership and service.

He said he will continue to do fundraising for Mission and Ministry as well as any other areas where he can be of assistance.

“I really hope to help shape us into one of the best Catholic universities in the land,” Zagone said.

Outside of working with faculty and on-campus programming, Zagone engages in spiritual outreach with donors and alumni while maintaining relationships with organizations like the Women’s Council and the Parents and Friends Leadership Group.

Zagone also said he hopes to uphold a component of the “cura personalis” value on campus: educating the whole person. He said he wants to provide people with the resources to develop themselves beyond “the professional, technical expertise.” He also hopes there will be more emphasis on working with students to meet their needs.

“He is a compassionate person and a thoughtful leader,” Taphorn said. “He puts students and faculty before anyone else.”

She said the changes happening around Campus Ministry are a big deal and will bring new energy around Mission and Ministry. She said as a sincere, Jesuit leader, Zagone can help communicate that faith doesn’t just mean Catholic.

“Catholic means universal,” Zagone said. “So by emphasizing our Catholic nature, we are in fact embracing and bringing in people of all faiths or people of no faith…My hope is that whatever their faith is, they can have the best, strongest faith journey that’s possible.”

There are signs of the university’s Jesuit roots across campus, such as the St. Joan of Arc Chapel and the Marian Grotto being built behind the chapel. Zagone said these “signs need to be internalized by people to help build our faith and help us to be better people…our purpose is to strengthen faith.”

Zagone said he is excited to have the opportunity to lead within the group that includes Campus Ministry because of how much it influenced his life.