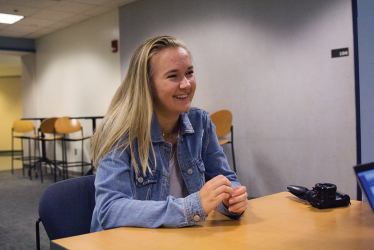 When Veronica Maniak, a sophomore in the College of Health Sciences, created her first YouTube video a few years ago, she had no idea that what started as an activity for a day of boredom would turn into more than 77,000 subscribers, public recognition and sponsorship from brands like Neutrogena and IKEA.

Known in the YouTube world as Veronica Paulina, Maniak began producing videos and uploading them to YouTube as a method of channeling her creativity during her early high school years.

“This time last year I was at 4,000 subscribers, and I just hit 77,000 subscribers this morning. So in a year it’s definitely crazy to see my YouTube channel grow,” Maniak said. “It’s hard sometimes to visualize numbers, but to see people on campus recognize me and my channel has been super special.”

Some Marquette students, whether having accidentally stumbled upon the channel or being dedicated subscribers, said they have benefited from Maniak’s videos.

Nervous about heading off to college for the first time, Kylie Champion, a freshman in the College of Nursing, took to YouTube this summer to investigate Marquette’s dorms. Scrolling through the YouTube feed, she found a vlog with a million views.

“I watched her video and went on her channel to see if she had any more Marquette-related content. I saw so many college videos on her YouTube channel so I subscribed to it,” Champion said. “Her videos helped me imagine Marquette as a home rather than a college campus.”

Not only did Maniak help incoming students with move-in advice, dorm essentials and sneak peaks of what life on campus is like, but her videos also proved beneficial for her peers.

Delia Garland, a sophomore in the College of Communication, met Maniak when they joined the same sorority. Upon hearing that Maniak had a YouTube channel, and wanting to show support for her Alpha Chi Omega sister, Garland began to watch Maniak’s videos. One video helped Garland reorganize her dorm.

Through balancing classes, video producing and editing, and taking part in extracurricular activities such as the Biomedical Sciences Students Association, Maniak said she learned about developing time management skills.

And while juggling all those responsibilities can get busy, Maniak said she always reminds herself to prioritize academics.

With YouTube available as an outlet for people looking to express themselves and provide entertainment, opinions and advice to the general public, vlogging has become an increasingly popular hobby for many. Maniak shared some advice for prospective vloggers.

“Always be yourself, and go into making a YouTube channel with your best intentions. Start it with a positive attitude, and the rest will just follow,” she said.

Maniak said she is not sure where her YouTube videos will take her but she has no plans to stop creating anytime soon. By sharing her Marquette experience through vlogs, Maniak played a role in helping some viewers adjust to college life.