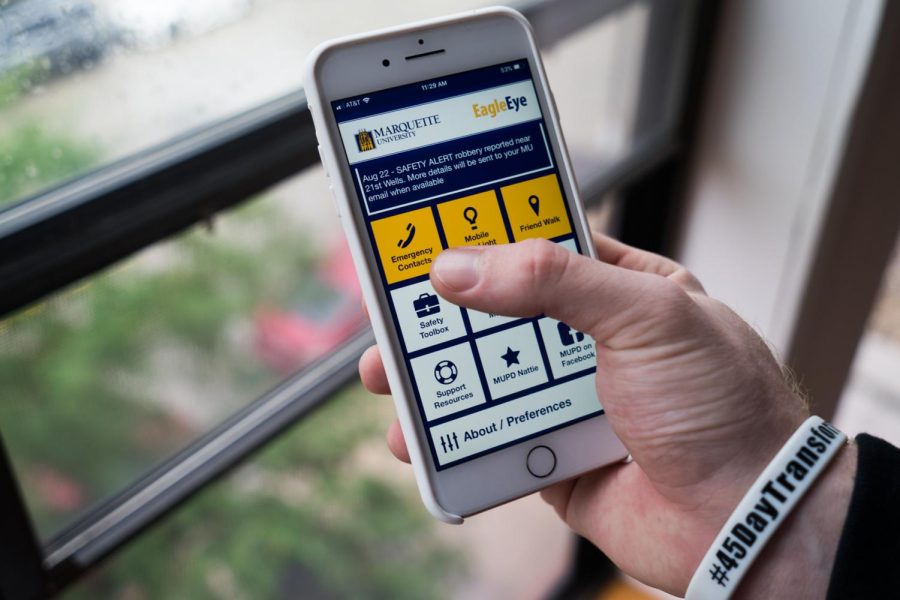 The app has many features for students, like emergency contacts and a safety toolbox with information on Marquette Limos, a flashlight, and the ability to share a map of your location with a friend.

Previously, the university participated in a safety app for Blue Light phones, known as Patronus. However, this app stopped existing about a year ago when it was bought out by another company, MUPD Capt. Katie Berigan said.

MUPD spent nearly a year to develop an app with the company AppArmor for the Marquette campus.

“We wanted to make sure we were doing it right and make sure that the app that we got was flexible,” MUPD Capt. Jeff Kranz said.

EagleEye features Friend Walk, an application that allows students to track their friends’ locations from point A to point B.

“It gives you that extra layer of security or protection and lets students take care of each other, which is what we want to do here. We are a community, and we all look out for each other,” Kranz said.

Berigan said MUPD hopes to add more features, such as tracking of the Marquette LIMOs. MUPD also plans to launch safety alerts through the app in the next week.

“We are slowly getting the app online as it continues to develop,” Berigan said.

Berigan said EagleEye includes the university’s entire emergency procedures guide, so it is not just for students, but faculty, staff and parents as well.

Although freshmen were encouraged to download the app during freshmen orientation, Erin Cook, a sophomore in the College of Arts & Sciences, said she has not read or seen anything about the new app.

“As an upperclassman, I have not been encouraged to download it at all,” Cook said.

The official app description encourages students to download it and ensure preparedness in the event of an emergency. There are plans to market the app further using news briefs through the Office of Marketing and Communication, Berigan said.