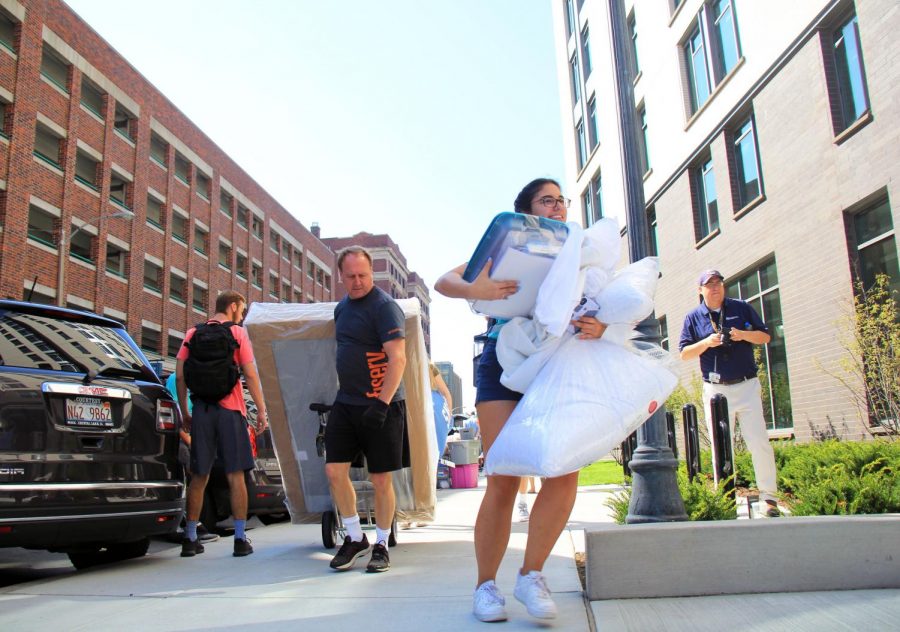 The residence hall is the first to be built in more than 50 years, and it will house 890 freshman and sophomore students.

Reverend Robert A. Wild, S.J., was present during freshman move-in day. Wild, a former university president who Wild Commons was named after, said the residence hall is spectacular.

Wild said having a residence hall named after him was something he never thought would happen.

“I used to say to one of my colleagues who insisted that it would happen, ‘No, I don’t think parents would want their kid living in ‘Wild Hall,'” Wild said. “But we haven’t had any trouble filling it, and we have a big waiting list.”

Wild said he is happy that students will enjoy living in Wild Commons. For Wild, the best part of the residence hall is the dining area. The thin crust pizza is his favorite, he said.

Wild Commons will be the only 24-hour service dining hall on campus, running seven days a week.

The 292,000-square-foot residence hall is complete with smart classrooms, study lounges on each floor, a Catholic chapel and prayer area as well as music and dance space.

Wild Commons consists of two towers. The first is Eckstein Tower, which houses 410 residents and runs parallel to 17th Street. There will be 480 students in Wells Street Hall, the other tower.

University President Michael Lovell, who spent the morning moving his own daughter into Wild Commons and handing out keys to incoming freshmen, said the morning was really exciting.

“It’s more than just a residence hall,” Lovell said. “I really believe the way that it has been set up and designed will really help build a sense of community.”

Lovell said the non-residents on campus can take advantage of Wild Commons as well.

“It’s not very often you get a chance to be in a brand new dorm,”  said Wild Commons resident Matt Waterman, an incoming freshman in the College of Business Administration. “I’m excited to be the first to try out all the new things here.”

“We get to lay the base for how people will see Wild,” said Wild Commons desk receptionist Siena Vietti, a junior in the College of Arts & Sciences.

Angela Feliciano, a senior in College of Arts & Sciences, is a third-year Resident Assistant who will transition to an RA role in Wild Commons. She said the new residence hall is all about building a new foundation.

“It’s really about rebuilding what we think a community should look like at Marquette’s campus,” Feliciano said.

Mario Walker, a sophomore in the College of Communication, is a first-year RA in Wild Commons who will assist more than 30 residents.

“I’m really excited and nervous at the same time because it is a new dorm, and some stuff is just going to go wrong, but it’s really nice to know that I’m going to be one of the first people to live there,” Walker said.

Wild Commons is the first construction project in the university’s campus master plan.  The plan totals in at $600 million.

Sophomores who chose to live in Wild Commons returned to campus Saturday for move-in day. With 40 percent sophomores and 60 percent freshmen in the residence hall, the building welcomed approximately 356 sophomores.

“Move-in day is always great because there’s so much energy and excitement, and just having students coming back to campus after being away for the summer, we miss them and we are anxious to get them back,” Lovell said.