SEASON PREVIEW: Men’s soccer looks to move on from 2017 quarrels 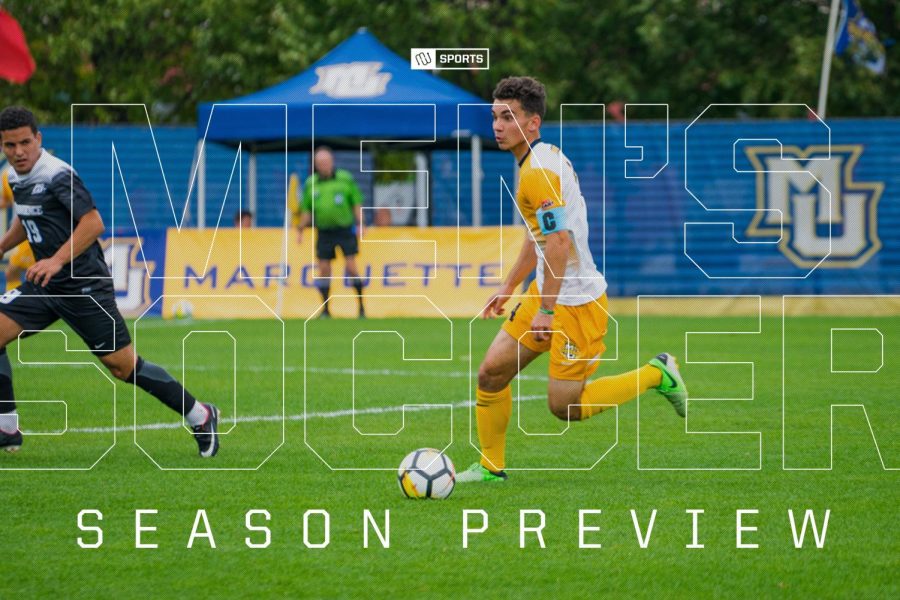 A quick look at Marquette men’s soccer’s 3-11-2 season in 2017 may not seem encouraging for this season, yet a strong cast of returners and some freshmen who played with the team in the spring have Marquette optimistic.

“We had a plan in the spring, and as much as we look back and think we definitely got some signature wins in the fall, it was the spring that was helping us define who we want to be and who we are going to be,” head coach Louis Bennett said.

The 2018 season cannot start soon enough for Marquette. A tough non-conference schedule meant the Golden Eagles were winless going into BIG EAST play before turning the season around last year. The team also went undefeated in its spring games.

While some of last year’s highs included a 4-2 win against Seton Hall and a 4-3 triumph over Creighton, some of the lows were a 0-3 performance at Wisconsin and a gut-wrenching 3-1 loss to DePaul that kept the Golden Eagles out of the BIG EAST Tournament for the third consecutive year.

Even though the result against DePaul was heartbreaking, Bennett was able to learn a few things from the loss.

“We have to have enough in the tank. Just because we’ve got momentum, we still have to take every game (seriously),” Bennett said. “And we have to be able to utilize every player in form in our squad, so we can get a result.”

The Golden Eagles are returning an array of talent to make the push for a better 2018 season.

Redshirt senior Grant Owens, who led the team with five goals last year, looks to have continued success in his final year with Marquette.

Junior Connor Alba and senior Diego Nunez are returning alongside Owens. Alba had three goals and four assists last year, and Nunez had the team’s only goal in the Aug. 11 exhibition against Loyola-Chicago.

There are also fresh faces at Marquette, including freshman Lukas Sunesson, a 5-foot-11 forward from Sweden.

“Lukas has phenomenal pace,” Bennett said. “He is an opportunistic finisher in front of the goal. He gets opportunities and makes opportunities with his feet but he will give us a point to the arrow so that we’ve got someone that can lengthen the field.”

One of the other new Marquette players that could have an early impact is junior Josh Coan, who transferred from Pittsburgh. He started 25 games for the Panthers in two seasons before transferring.

“Josh Coan was one of the leading goal scorers in the U.S. Academy and then went to Pittsburgh and played relatively well, but it wasn’t exactly the fit he was looking for … came here looking for a fresh start,” Bennett said. “He’s a creative guy … he fits in similar with Luka Prpa and Conor Alba.”

Bennett said he has particularly high expectations for Owens, Alba, Sunesson and Coan.

“Amongst all those players that I’ve just recognized, we expect to be able to put a strike force that will be good for one or two goals a game,” Bennett said. “That’s what we are planning on.”

Junior Luka Prpa will lead the midfield after being one of Marquette’s stars for the last two years and playing with Chicago FC United in the Player Development League this summer. Prpa had a team-high five assists last year with the Golden Eagles, and he is one of the most important players on the team.

“Luka is not necessarily always very vocal — he’s working on that — but he definitely leads by example because he shows the way when the way is a little bit difficult,” Bennett said. “If you want to be a great leader, you have to not only show it, you have to be able to show it every day,” Bennet said. “Then if you can advise people and bring people along nonverbally and verbally, and they continue to work on it, that’s when you got a great player and a great leader, and that’s Luka Prpa.”

Rounding out the midfield is redshirt senior Martin Alba. Alba, who shares captain duties with Prpa, had an injury-riddled 2017 season but started in six of the seven games he played.

“Martin Alba hasn’t had as clear a path because he’s been injured. He’s had several major injuries,” Bennett said. “He’s been out for basically a season and a half. He is also a good leader and he’s also a vocal leader.”

Ruben Sanchez is also returning to the midfield. The defensive midfielder started in all but one of his 15 games played with the Golden Eagles.

One of the main reasons for Marquette’s struggles last season was its back line, which registered only one clean sheet in 2017. With Brendan Skinner transferring to Western Michigan, it does not bode well for the Golden Eagles in 2018 either.

But it’s not all doom and gloom for Marquette. German center backs Steffen Bohm and Manuel Cukaj are returning along with juinor Patrick Seagrist. Cukaj was on the BIG EAST All-Freshman team last season. These three are returning from a season of playing together, and the Golden Eagles have a chance to display more of a presence from the defense this year.

Marquette also added juniors Leo Villa and Oliver Posarelli and freshman Josh Hancock to bolster the defense. Posarelli already helped Marquette this season with an assist in the preseason win against Loyola-Chicago.

“A lot of times (last year) we were scoring goals, and we were giving up goals because we were not stable in the central defense,” Bennett said. “I believe we have solved that problem both with people here and with people we brought in. We have a 28-man squad … I think we are pretty stable.”

Senior goalkeeper Luis Barraza returns with experience to help steady the back line. Last season, Barraza averaged the second most saves per game in the BIG EAST at 4.36 until he suffered an injury.

“We’ve got a senior class now that is battle-scarred and is very loyal to the program. We do have talent and potential with this upper class,” Bennett said. “It’s the first time that we’ve had an upper class for a couple of years that the majority will be pushing for starting time and have clopped up serious experience.”