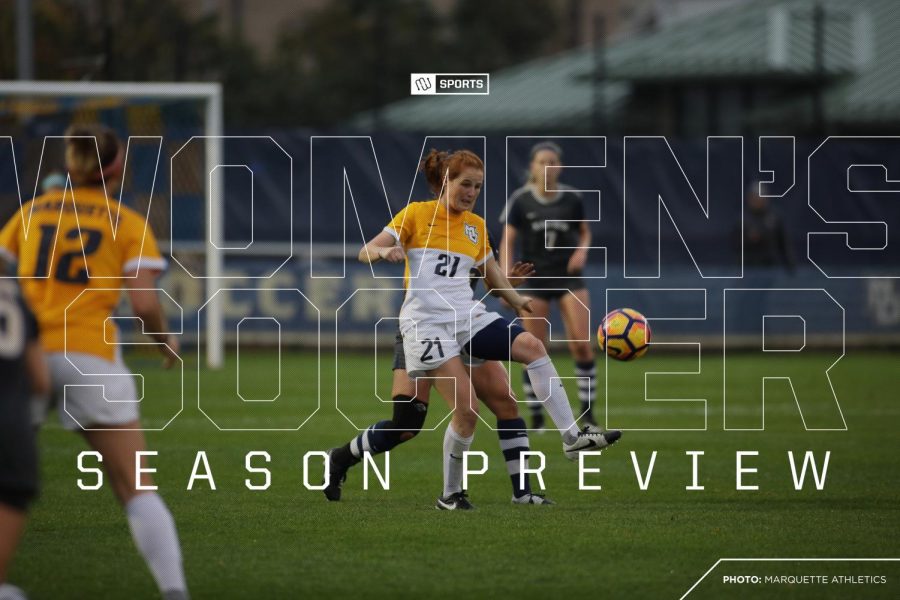 A National Collegiate Athletic Association Championships berth seemed within reach for Marquette women’s soccer during the majority of the 2017 season. Then, an injury to forward Carrie Madden and a four-game stretch in which Marquette was outscored 9-2 derailed the team’s postseason aspirations.

Now with Madden healthy and a formidable non-conference slate looming, Marquette is looking for a return to the NCAA Championships.

“We haven’t had enough players in the program that have been there except a couple of years ago,” Roeders said. “[We are] getting back to that point and having that opportunity that this whole group embraces.”

Marquette will not have any time to dwell on its postseason dreams, playing a non-conference schedule full of women’s soccer mainstays. Seven of the Golden Eagles’ nine non-conference foes finished last year in the top 70 of the Rating Percentage Index.

“Our schedule is extremely ambitious,” Roeders said. “This may be among the most competitive non-conference schedules that we’ve had in some time.”

“Duke and North Carolina, those are two top-five programs,” Roeders said. “Duke went to the Final Four last year … North Carolina is probably as good as they’ve been in the last seven or eight years.”

Roeders said that if the team goes 3-3 against six of the more challenging opponents, “you’re going to have three good results” and another three losses that are “not a bad result.”

“When you get into the postseason considerations and you’re knocking on the door … that’s what they’re going to be looking at,” Roeders said. “How did you do though? If you go 0-6, anyone can schedule those games. You’re going to have to get some results.”

After opening the season at Cal Poly Aug. 16, the team will host Wisconsin Aug. 20 for the first time in the regular season since 2004.

If both teams earn NCAA at-large bids and have similar postseason resumes, the winner of the Aug. 20 battle will likely host the other team in a potential NCAA Championships matchup.

“It’s one of those early implication games,” Roeders said. “Down the road, everything else being equal … it literally comes down to ‘you beat us, you get to host.’”

Even for many of last year’s contributors, facing a non-conference gauntlet is a new experience. The team played only two games against ranked opponents and four games against teams in last year’s NCAA Championships field.

“We’ve only experienced top-rated teams a couple games each season,” junior goalkeeper Maddy Henry said. “It’s definitely different. I think it’s going to be an awakening for the underclassmen.”

Marquette played five ranked teams in 2016, but only five players that played five or more games that season remain on the roster in 2018.

The Golden Eagles will likely be much more competitive in BIG EAST play after finishing third in the preseason poll for the second consecutive year.

“We do belong in that group of top three, maybe four,” Roeders said. “We definitely can and should challenge for a title, either regular season or (in the BIG EAST Tournament).”

With two of the team’s top three goal scorers graduated, Madden and sophomore Kylie Sprecher are expected to lead the team’s scoring attack again in 2018. It’s a role Madden has embraced in the last two seasons.

“Carrie is a great team player, but at the same time, Carrie is also like, ‘I want to score goals,’” Roeders said.

And Madden is embracing another role – leading a young roster through a formidable non-conference slate.

“You have to be up for the challenge,” Madden said. “You never know what’s going to happen. In one soccer game, anything can happen.”

But Madden and Sprecher’s offensive duo alone will not be enough to thwart the perennial powerhouses on Marquette’s schedule. The Golden Eagles will need major contributions from a defense that shut out 12 of its 21 opponents last year.

Following the departures of Darian Powell from her graduation and Hailey VanDerLeest from her transfer, Marquette will rely heavily on four players for the three forward spots: Carrie Madden, Kylie Sprecher, Jamie Kutey and Abby Hess.

Sprecher, who picked up All-BIG EAST Freshman Team honors last season, may have a slow start after missing the team’s two exhibition matches due to injury, but she has been cleared to play.

Madden, the team’s lone representative on the Preseason All-BIG EAST Team and last year’s leading goal-scorer, will once again be in the position to score goals.

Kutey will look to have a breakout season after injuries hindered her sophomore and junior seasons.

Redshirt senior Ryley Bugay will continue to serve as the “nuts and bolts” of the team at the defending midfielder position after playing with the Phillippines national team in the Asia Cup last spring.

Senior Leah Celarek played her first three seasons on the backline, but will return to her natural position in the midfield alongside Bugay.

Freshman Katrina Wetherell has quickly emerged as the frontrunner to replace Eli Beard as the attacking midfielder, starting in both exhibitions.

“It’ll be a fun challenge to see who is going to step up and fill those roles,” Madden said.

Roeders will arguably have the most depth in the back line, losing only one starter and bringing a college-ready freshmen class.

“This year we have a lot more depth in the defense than we ever had,” Henry said. “We have a lot more options and patterns we can do with that, so defensively, it’s looking really good. I have some very high hopes for our defense.”

Senior Allison Jacobson and redshirt junior Bri Jaeger are expected to play significant minutes at center back. Roeders described Jacobson and Jaeger at centerback and Celarek and Bugay in the midfield as a “skeleton of older players.”

Henry will start at goal for the third consecutive season after starting in all 43 matches her first two years at Marquette. With center back Madison Dunker graduated, Henry will assume a larger leadership role in 2018.

“(Henry) is very vocal. Players in front of her respond to her,” Roeders said. “(Dunker) provided a great voice and leadership, but I think we have a few other elements now.”