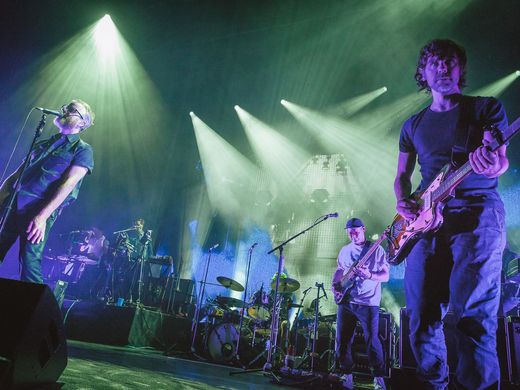 The National performs in Milwaukee

As the line of people slowly inched closer to the door, the plan was simple: get a front row spot. For those who don’t know, before you enter the Riverside Theatre during a general admission performance, an usher will ask whether you would like to stand or sit. We replied that we wanted to sit, eyeing the front row of seats. “Are you sure?” was her response, giving us what would end up being a second chance for which I will always be thankful. We agreed to stand, and entered the pit as we waited for rock band The National to take the stage.

Before The National was set to play their sold-out show Monday, opener Lucy Dacus warmed the crowd, foreshadowing the quality of the concert ahead. Playing songs off her newly released album “Historian,” her 30 minutes on stage were filled with heart-wrenching lyricism and passion for the music she was performing.

In my experience as an avid concertgoer, the opening band is often hard to understand. Not in terms of why they were chosen to open, but it’s audibly difficult to make out what the lead singer is saying. Thankfully, this was not one of those times. Each word and carefully constructed lyric came out clear, making for an even more emotional performance.

Gaining confidence throughout her set, which was boosted by the crowd’s attention and cheers, she finally reached her final song. Half the band left the stage and as she took her glasses off, the guitarist started to play the title track off her new album. As the song progressed, a dead silence filled the venue. All eyes were locked on her and she left with what I would consider the biggest applause I have ever heard for an opener.

Most of The National’s impressive catalogue of music is very dreary and would fall under the category of songs to listen to while lying in bed on a rainy Sunday afternoon. I was unsure what would happen while in the pit. Would the audience sway back and forth, or just stand and pensively watch lead singer Matt Berninger sing about some sadness in life? It became much easier to gauge what to do when the band took the stage.

Berninger, singing powerful and personal songs, was everywhere on stage and in the audience interacting with fans. His movements were entrancing and he brought an energy that you wouldn’t get just listening to the album. Just like with Dacus, the audio levels were perfect. Berninger’s crooning was audible without drowning out the other instruments. The horn section complemented the drums which complemented the guitar and so on to create an impressive blend.

There’s a reason why Berninger is a lead man. During the song “The System Only Dreams in Total Darkness,” he extended into the crowd and touched foreheads with a fan in the front row. While it was only that one fan who was face to face with him, everyone seemed to feel that connection. What’s weird about Berninger is his onstage personality offered an interesting juxtaposition with what he sung about.

As he moved around, he brought levity to heavy songs and kept a continuous energy with the crowd that never faltered. “Graceless” saw Berninger in the audience walking through the crowd, maintaining that energy until it was time for the tech crew to reel him back in like a fish with his microphone cord.

The encore featured “Quiet Light” and an intense version of “Mr. November,” but the true highlights came from the last two songs. “Terrible Love” could have ended the whole concert. The song continued to build until it reached a peak where flashing lights and head banging went hand-in-hand and ended with Berninger throwing his microphone to one stagehand and his earpiece to another.

Any thought that it was the end of the night was quickly diminished as Berninger turned a microphone to the crowd and all the band members met in the middle. Two more microphones stood at the ends of the stage as acoustic guitars slowly strummed to “Vanderlyle Crybaby Geeks” and the crowd knew that it was time for everyone to sing along.

As the Riverside was filled with the echo of voices, guitars and the faint sound of the horns, it became apparent that this was a much more fitting end to the night. It was one of those rare times when everyone was together. If someone didn’t know the song, they learned it quickly. A special moment came where all of the audience lost the lyrics and Berninger had to get us back on track. Even when we were wrong, we were wrong together, and it made for one almost perfect concert.