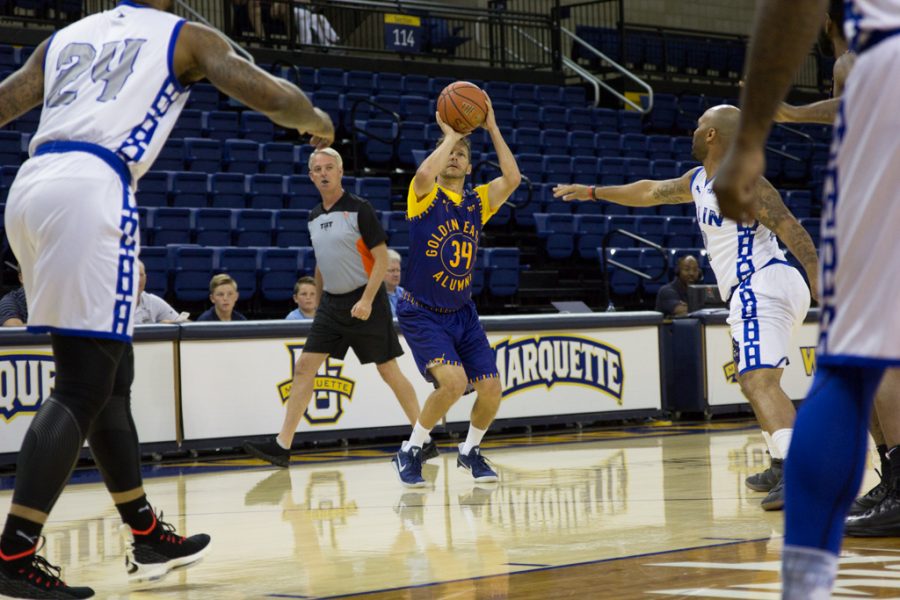 Now with Crean watching and Chapman coaching, Diener has sent Marquette’s alumni team to a different Final Four — the semifinals of The Basketball Tournament.

After Boeheim’s Army (Syracuse alumni) eviscerated Golden Eagles Alumni’s 15-point second half lead and tying the game at 80-80, the Golden Eagles needed some offense before the start of the Elam Ending.

Diener answered with a 3-pointer from about five feet behind the 3-point line to give Marquette a 83-80 lead entering the Elam Ending.

When Marquette had an 87-86 lead and needed 90 to win, Chapman was looking for another three, not even considering the idea of two 2-pointers.

“With this ending, we’re going to live with (the 3-pointer),” Chapman said. “We’re going to win and die by it.”

And Diener cashed in again. After he and Maurice Acker missed threes, Diener got the ball again several feet behind the 3-point line and canned the trey. Diener never had any doubt.

“He looked at me and said, ‘I’m going to bomb it,” Chapman said. “So we drew up a play and bombed it away.”

The win came despite Boeheim Army’s domination of the post. After a quiet first half, Hakim Warrick drove to the paint at will, scoring 20 points in the second half on 6-for-6 shooting. Warrick was also 8 for 9 from the charity stripe in the second half.

Boeheim’s Army finished with a 32-20 scoring advantage in the paint and a 52-46 rebounding advantage. Syracuse’s alumni team also had 25 trips to the charity stripe, missing only two attempts.

Golden Eagles Alumni also had a short-handed lineup at the end. Jerel McNeal and Jamil Wilson each fouled out in the fourth quarter. Wilson led the team in scoring in two of the first three TBT games this year.

“We’ve been preaching this whole time, ‘Next man up, next person,” Chapman said. “And it came into fruition today.”

“It’s a long and athletic zone, but we have guys that can penetrate and kick,” Diener said. “The key is to get in those slots and kick out, and not settle for those 15-foot jumpers.”

The perimeter firepower forced Boeheim’s Army to abandon the zone and adopt a man defense to little avail. The Golden Eagles shot 62 percent from the field in the third quarter and 53 percent in the fourth quarter.

“They kind of threw us for a curve when they went to a man-on-man,” Chapman said.

“We trusted Trav (Diener) and Mo (Acker) to take those shots,” Chapman said. “We believe in those guys.”

Overseas Elite will give Golden Eagles Alumni a Kansas-like challenge Thursday in the semifinals. The team has never lost a TBT game, winning the last three titles.