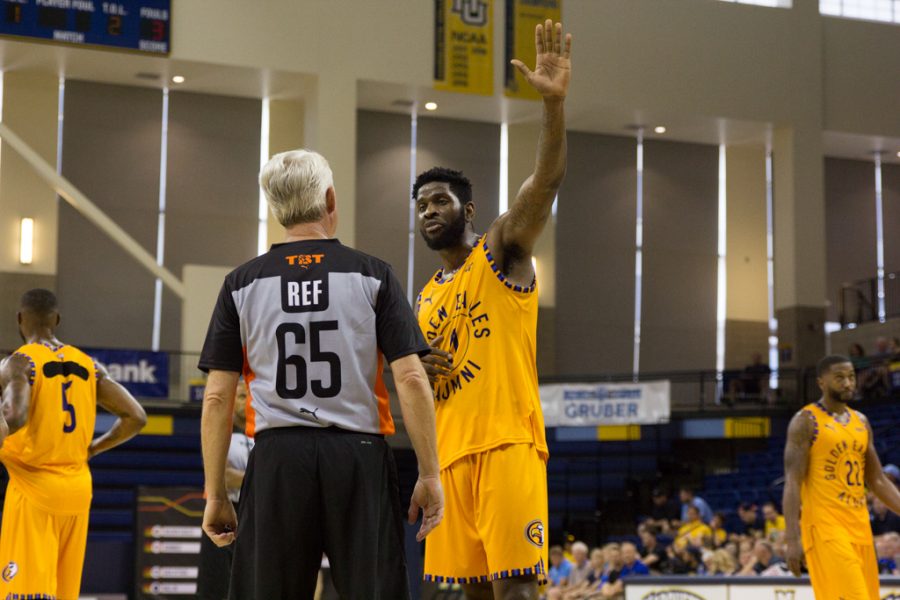 Entering this year’s The Basketball Tournament, Golden Eagles Alumni guard Jerel McNeal was hardly a fan of the new Elam Ending rule. The rule stops the clock with four minutes left until a team reaches a target score.

“It’s definitely a little different,” McNeal admitted Thursday. “I wasn’t sure about it at all going into it right away.”

But Golden Eagles Alumni might be a bigger fan of the “Elam Ending” after Jamil Wilson used two possessions to complete a 73-66 win over the Talladega Knights Saturday afternoon.

With the game tied at 66-66, Wilson hit a three while drawing a foul, moving the Golden Eagles three points away from an Elam Ending win.

Wilson’s mindset wasn’t necessarily to take over the game at the end.

“We had a four-point cushion and they closed the gap,” Wilson explained. “Get to (73) before they could and find the quickest way. It just happened to be me.”

The win was not always so certain, however. Talladega had an 11-point lead in the second quarter and could have led by even more if the team hadn’t missed six first-half free throws.

Meanwhile Marquette’s offense was virtually nonexistent in the first half, shooting 27 percent from the field and 18 percent from 3-point range.

Head coach Joe Chapman’s halftime adjustments made quite a difference. Fluid ball movement allowed the Golden Eagles to score on their first five possessions of the second half.

“We’ve always had games in the old BIG EAST where the first half doesn’t go your way,” Wilson said.

After lackluster first-half shooting from beyond the arc, the Golden Eagles hit 12 of 17 threes in the second half.

The comeback came despite excellent post play from Talladega. The Knights had a 42-20 scoring advantage in the paint and a 45-31 rebounding advantage.

“We were small at times,” Wilson said. “They just played bigger guys. They used their advantages.”

Marquette’s alumni team has been out-rebounded in every TBT game this year.

Wilson led the Golden Eagles with 24 points on 7-for-13 shooting. He has scored at least 19 points on .500-plus shooting in every game of the tournament.

McNeal scored 16 points before fouling out in the Elam Ending, and Elgin Cook chipped in 12 points.

Half of Talladega’s scoring came from two players: Ramone Moore and Samme Givens. The duo also combined to grab 17 of the team’s 41 rebounds.

Marquette will play the winner of Boeheim’s Army (Syracuse alumni) and Armored Athlete Sunday at 12 p.m. Central time. Marquette has never advanced beyond the TBT quarterfinals.