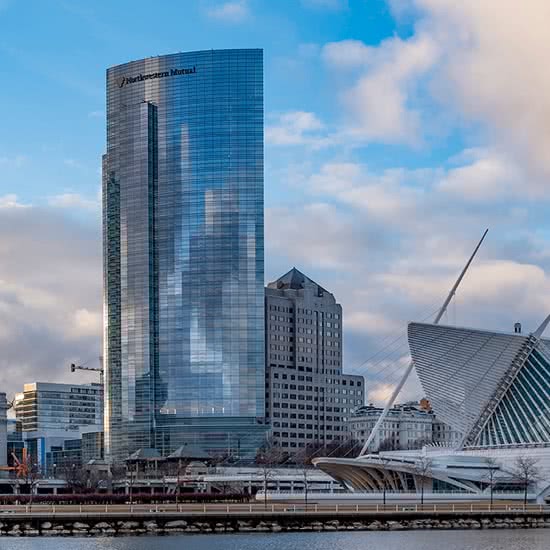 Over the next five years, Northwestern Mutual and its foundation will be contributing $15 million for various science, technology, engineering and mathematics opportunities at both educational institutions, according to a statement released today.

The total commitment in the effort will total nearly $40 million, the statement said.

That money is “to support an endowed professorship at each university, research projects, new data science faculty, development of expanded curriculum, K-12 STEM learning opportunities, and pre-college programming. Marquette University and UWM will each invest more than $12 million in data science education and research by existing data science faculty,” the statement said.

Marquette University President Michael Lovell said in the release that “regions thrive when organizations creatively address common challenges from different perspectives. Northwestern Mutual, UW-Milwaukee and Marquette are creating an exceptional, unprecedented partnership to further the economic renaissance underway in southeast Wisconsin. Marquette will strengthen the collaboration through our data science major, which gives students the skills needed to transform data into knowledge that will benefit society.”

All data science majors partake in a project where they work in the industry, and Northwestern Mutual provides a great opportunity for students to access important work.

“It will be a nice collaborative pipeline… they’re looking for interns, and watching how our students work is more accurate than doing interviews in my opinion,” Guha said.

He explained that Northwestern Mutual has been a partner with the university for a long time, and it is mutually beneficial for Milwaukee to be a technological and scientific hub.

The classes will launch in the 2019-’20 academic year, and will be housed in Cream City Labs, a new site currently under construction in Northwestern Mutual’s downtown Milwaukee location.

“Northwestern Mutual data science leaders will also partner with the universities on teaching opportunities, mentoring and internship programs, and will help to provide insight on how student curriculum can better align with current business and industry needs,” the statement said.

Northwestern Mutual chairman and CEO John Schlifske said the field of science data has been growing rapidly to adjust for changes in the needs of businesses.

“Preparing our future workforce and aligning curriculum with business needs is critical to the economic vibrancy of Milwaukee,” Schlifske said. “Northwestern Mutual is committed to building a center of excellence around data science, and through our partnership with Marquette University and UW-Milwaukee, we will establish Milwaukee as a data science capital with leading academic programs and career opportunities.”

The process of hiring directors and planning the curriculum for the Northwestern Mutual Data Science Institute is set to begin June 30.