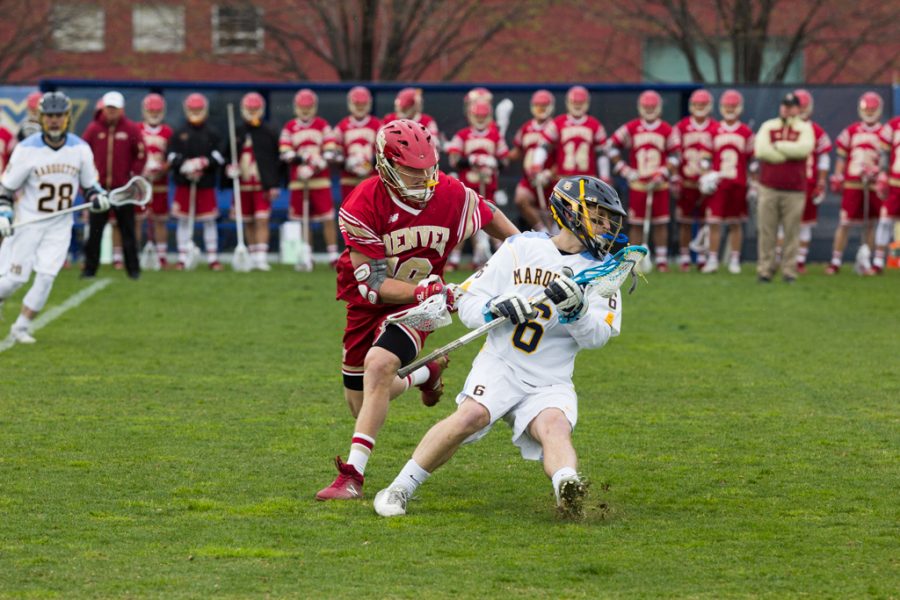 Junior attackman John Wagner’s goal with 5:16 remaining in Thursday’s BIG EAST semifinal game against Denver put the men’s lacrosse team on the verge of a comeback for the ages. The Golden Eagles were down only 8-7 after the goal and seemed destined for another one-goal game win.

Soon after, Marquette came crashing back down to Earth. Denver junior attackman Austin French scored one of his game-high five goals at the end of the game to effectively end the Golden Eagles’ season by a 10-7 final score at Villanova Stadium in Philadelphia.

“It’s a little bit of a tease,” Wagner said about the comeback. “You get your hopes up and you’re like ‘man, we’re in this game,’ and then they scored that dagger with the open net and we threw the ball away and that was kind of the story of the fourth quarter … It hurts, but it’s the game and it’s life.”

The two-time defending BIG EAST champions will miss the NCAA Tournament for the first time since 2015, when they lost to Georgetown in the semifinals also at Villanova Stadium.

Head coach Joe Amplo thought that the intensity was there and it showed in the way his team competed against who he now considers to be a rival.

“I was asked a couple of years ago in 2016 if this game was a budding rivalry,” Amplo said. “But now I am and am proud of the seniors for putting us in a position that I honestly feel like Denver-Marquette have a huge rivalry now. It’s five years into this (series) and we’re disappointed that we lost to a team that’s won a national championship in the past three years and have been to three out of the last four Final Fours,”

“I can tell you it was a sad locker room and an angry locker room after the game, we’re not satisfied and that’s OK,” Amplo continued. “We got beat by a better team.”

Marquette could not get faceoff wins down the stretch as Pioneers’ senior faceoff specialist Trevor Baptiste went 14-of-21 on the afternoon. In the process, he became the all-time NCAA leader in faceoff wins with 1,118.

The Golden Eagles were down as many as four goals with 14 minutes remaining in the fourth quarter.

However, Marquette clawed back with goals from redshirt junior midfielder Jack Zerrillo, freshman attackman Anthony Orsini and Wagner’s extra-man-opportunity goal. Wagner had a team-high three goals on the day, which gave him 30 for the season. It’s the fourth-highest single season goal total in Marquette history.

Wagner thought that the offense made solid second-half adjustments and it allowed the Golden Eagles back into the game.

“It wasn’t too big of any adjustments, it was kind of reading the defense and how (Denver) adjusted to play me specifically and a lot of other guys on offense made that quick adjustment, moved the ball around and good things happened.”

On the ensuing possession, Baptiste won the faceoff and after a long offensive sequence, French found the NCAA’s second-leading scorer in sophomore attackman Ethan Walker, who got open on the right side of the cage. Walker fired one in off the post, making it 9-7 and dashing Marquette’s hopes.

In the first half, Marquette kept it close because of senior faceoff specialist Zach Melillo, who won five of his seven faceoffs on the day. The Pioneers led just 5-3 at halftime.

The Golden Eagles kept pace early in the second quarter, holding the Pioneers scoreless for more than 11 minutes. Pioneers junior midfielder Danny Logan went coast-to-coast and scored with 5.9 seconds remaining in the quarter to kill all of the defensive momentum that Marquette had in the period.

Senior goalie Cole Blazer made nine saves in what proved to be his final college game, but says that building the Marquette legacy after four seasons has been worth it.

“It’s been extremely rewarding, I feel, building a name that Marquette has, it being in the Midwest to try and prove that we’re trying to be a hotbed, we’re growing, we’re competing and we’re trying to compete with those East and West coast schools.”