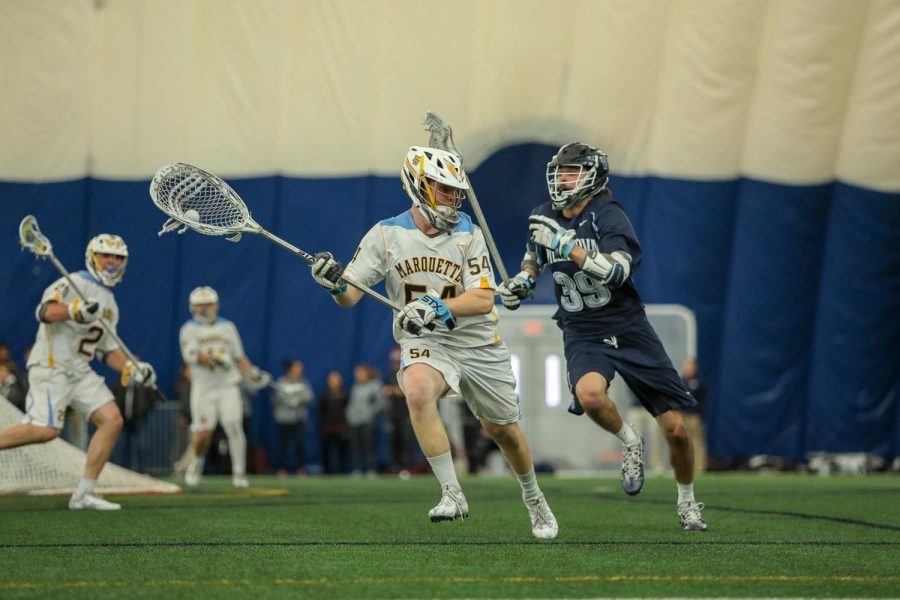 Marquette will face an all-too familiar opponent Thursday in the semifinals of the BIG EAST Tournament when they will square off against Denver, a team the Golden Eagles faced last Saturday and in each of the last two conference tournaments.

The fourth-seeded Golden Eagles will face the top-seeded Pioneers in Villanova, Pennsylvania in a rematch of last year’s BIG EAST semifinals and the championship game from two seasons ago. Marquette is the two-time defending conference champions and will face a daunting task in order to achieve a third consecutive title.

The Golden Eagles (6-7, 3-2 BIG EAST) have a quick turnaround after falling to the Pioneers 7-4 last Saturday. Although Marquette performed well defensively, head coach Joe Amplo was not impressed with the offense but has high hopes for Thursday.

“I wasn’t happy with our performance on Saturday,” Coach Amplo said. “Especially on the offensive end, but I’m confident that with a better performance, we can give Denver a challenge.”

The situation is eerily similar to last season when the Golden Eagles were beat handily by Denver in the final game of the regular season only to come out five days later and pull of a shocking upset.

With such similar territory for the Golden Eagles, veteran players like senior goalie Cole Blazer has used past situations to his advantage.

“It’s pretty cool that we’re in a similar boat,” Blazer said. “I know that’s how Coach (Amplo) really likes to design our season, but it’s a great test for us. Obviously at the end of the season, hopefully we’re able to put all of the pieces together.”

Blazer referenced the last two BIG EAST championships as a source of familiarity and knows that in order to come out on top against the Pioneers, Marquette will have to play mistake-free.

Amplo knows how every game from here on out it is do-or-die and he plans to utilize that mindset Thursday afternoon.

“(It’s a) game seven mentality,” Amplo said. “It’s all or nothing for these guys. We’ve proven in the past that when our backs are up against the wall, we can perform a little bit better.”

With senior faceoff specialist Zach Melillo playing what could be his final game, Amplo knows that he’ll have his work cut out for him against one of the greatest faceoff specialists to ever play in Pioneer’s senior Trevor Baptiste. Baptiste has won 77 percent of his faceoffs all-time and if Marquette is to stay in the game, it will be determined at the faceoff.

“(Baptiste) is a joy to compete against,” Amplo said. “He is the best to ever play that position and beyond that he’s a wonderful human being. And every second time that Zach has played Trevor in a season, he’s done better than him. I’m curious to see if Zach and our team can handle that and respond the same way that they have in the past.”

While the faceoff X is one area of concern, Denver has plenty of other weapons. The country’s No.3 team also has one of America’s most dangerous offenses. Junior attackman Ethan Walker is second in the country with 3.23 goals per game and put up a hat trick last Saturday against Marquette.

Meanwhile, the Pioneers (11-2, 5-0 BIG EAST) are the 12th best scoring offense in the country and are the top defensive scoring team as well, averaging just 7.46 goals per game. The Golden Eagles average 7.92 goals per game with junior attackman John Wagner leading the team with 27 goals.

Blazer knows that in order for Marquette to stay in the game against Denver, every player has to play their part, especially the seniors.

“The last couple of moments that we have together need to be that much more cherished at this point,” Blazer said. “That’s what we are really fighting for, especially the seniors. It’s all about more time with this crew, this team and these coaches.”

Amplo knows that once the game begins, Marquette will not have to worry about being the underdog. They’ll just have to play better lacrosse for four quarters.

“Once the whistle blows, it’s a 60 minute contest,” Amplo said. “What happened before and what will happen in the future has no bearing on that moment. For two hours, we’ve got to be the better team.”