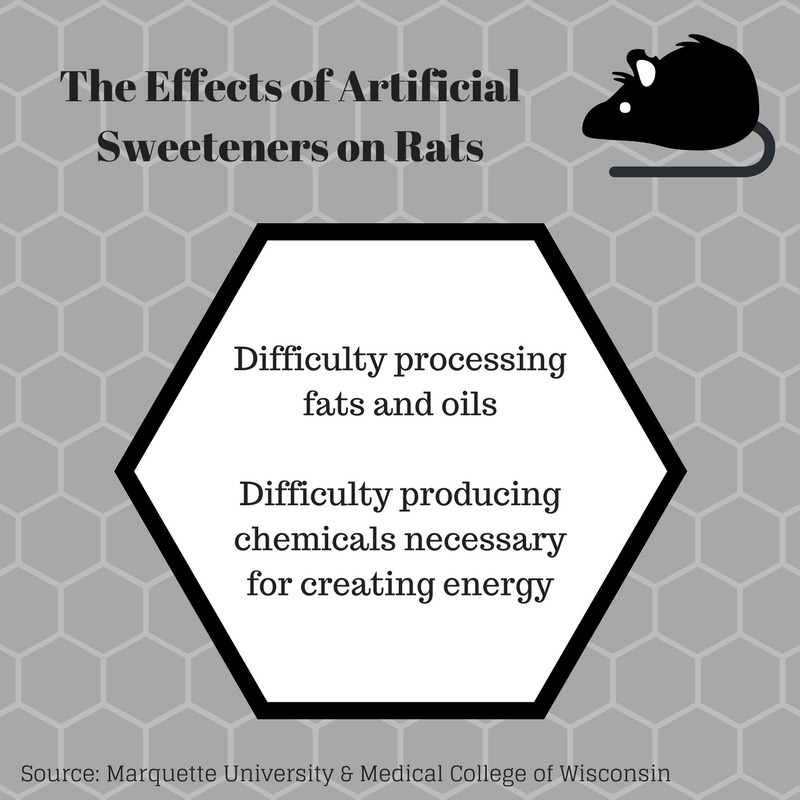 Hoffman says the artificial sweeteners had negative effects on the rats' metabolic processes described above. Graphic by Josh Anderson.

Diet sodas have long been advertised as sugar-free, and therefore a healthier alternative to sugary counterparts. However, new research from the university’s department of biomedical engineering suggests otherwise.

Researchers from Marquette and the Medical College of Wisconsin recently discovered a possible link between artificial sweeteners and obesity and diabetes.

Hoffmann said his laboratory has studied the effects of high glucose consumption for a little over two years, though the focus on artificial sweeteners did not occur until more recently.

“It wasn’t until a little over a year ago that we started conducting research on artificial sweetener consumption,” he said.

In his tests, Hoffmann and his team used diabetes-susceptible rats to measure the effects of sugars and artificial sweeteners on metabolic processes, or the body’s systems which create energy from food. For three weeks, researched fed different groups of rats high doses of different sugars and artificial sweeteners. The researchers then studied the rats’ blood to see how the sweeteners affected their metabolism.

The researchers saw negative effects from the sugars and the artificial sweeteners, Hoffmann said. However, different mechanisms caused these effects.

The sugar significantly altered several hundred different substances used in metabolic systems. This severely impacted the rats’ ability to burn fats and oils, which could potentially lead to medical conditions such as obesity and diabetes.

Hoffmann said the next step for future research is to track the effect of artificial sweeteners and sugars in a long-term study. This would allow them to see the long-term effects of the sweeteners and their potential progression towards diseases such as cardiovascular disease, obesity and diabetes.

Hoffmann’s research was reported on by several news organizations such as Newsweek and TMJ4. Lars Olson, the interim joint chair of biomedical engineering, said it’s uncommon for academic research to attract the attention that Hoffmann’s research has.

“Many professors do research to better understand the world and make an impact to improve lives,” Olson said. “It is rewarding when one’s research is recognized by the public as being important to their health.”