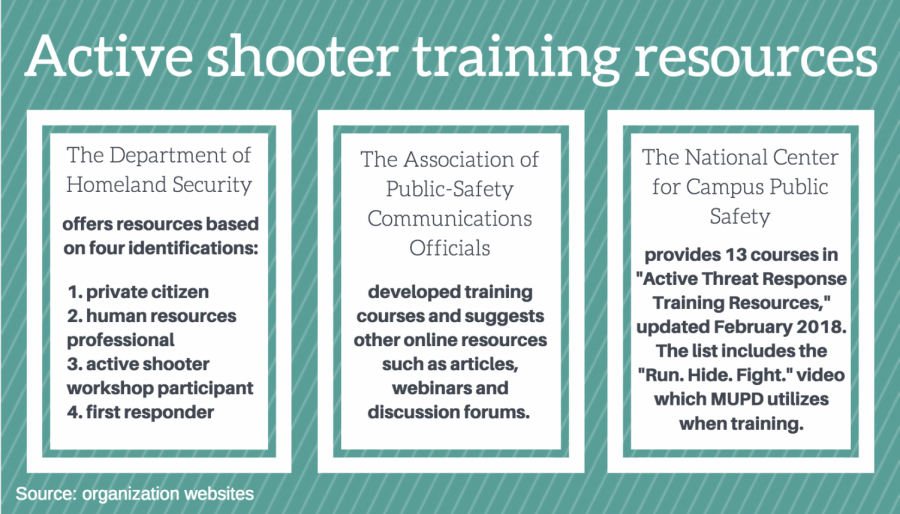 There are various active shooter training methods and resources utilized throughout the U.S. Graphic by Jenny Whidden.

The Office of Residence Life is transferring some components of ORL employee training from in-person sessions to an online format. One of those components is active shooter training.

ORL previously provided employees with active shooter training in August, just before the start of each academic year, Renee Dowdy, the assistant director of student staffing and training, says. The training consisted of videos and a presentation from a Marquette University Police Department officer.

Active shooter training began for resident assistants about five years ago, and about three years ago for desk receptionists. However, it was not included in the August training sessions in 2017. ORL was exploring an online version but has yet to construct it. This means all current first-year RAs and DRs did not receive active shooter training.

Dowdy says ORL pursued options to make RA and DR training more accessible for employees who could not make the August sessions or who wanted the information in advance. As a result, ORL reevaluated active shooter training and other training aspects.

“I’ve been working with a few different training components to make them more sustainable in that way so that we can onboard people with the same, consistent information, and so active shooter training was falling within that,” Dowdy says.

Maxwell Moloney, a current DR in Carpenter Hall, was an RA for the 2015-’16 and 2016-’17 academic years. He experienced active shooter training both years.

“I do think making (training) more accessible is a great idea. For some reason, if an RA couldn’t make it to that active shooter training, then that one individual is just kind of at a loss,” Moloney says.

The online training will consist of a video of MUPD’s active shooter training and a quiz, Dowdy says.

“This affords us the ability to really rely upon Marquette police as the experts in campus safety and in keeping our community safe and to really allow their voice to be present,” Dowdy says.

She says the quiz portion is an opportunity to include a learning assessment aspect that was not present in previous sessions. She says the quiz can also address the emotional aspects of the material.

“I think there’s a lot of emotions tied to the experience of active shooter training. … By getting their feedback after the fact, it can also prompt us to be able to provide additional follow up or clarity,” Dowdy says.

While Moloney says he supports the online version for those who cannot attend the August training, he does not think it should replace the in-person sessions.

“I think having the training in person is more impactful. You feel the gravity of the possible situation more, and you have the opportunity to interact with presenters and peers,” Moloney says.

ORL expects to implement the online active shooter training in fall 2018. Dowdy says it will take time to film, produce and edit the video, as well as to develop the quiz.

Interim MUPD Chief Jeff Kranz says active shooter training begins with an educational portion where an officer explains what a mass shooting might consist of and the history of American mass shootings. A video of a mass shooting enactment follows.

“The object of that (video) is so that the first time one of these things happens isn’t the first time you’re exposed to it,” Kranz says. “You kind of have something in your head that shows you how it unfolds and that will help direct how you respond to it.”

The training then lays out three general response options that could be utilized in a mass shooter situation: run, hide or fight. Kranz says because each residence life employee is in a different building, the training is meant to provide the foundations of a plan.

“I don’t know where the closets are and the secret rooms are, and the stairwells and fire exits and all that. I don’t know that in your building,” Kranz says. “I’m going to tell you how to keep yourself safe, and then you have to apply it to your environment.”

Moloney says the training was helpful despite the challenging nature of presenting active shooter situations.

“There’s no perfect way to prepare for anything like that. There’s no way to get any hands-on training,” Moloney says. “It was really useful to get that training, I think, because I wanted to know how I could help protect my residents. I’m glad we did it.”

Dowdy says though RAs are active shooter trained, their training focuses on identifying concerning behaviors and knowing who to go to in case they are worried about their residents’ safety.

“The RA position is a leadership role. It is incredibly valuable in building community, and that’s first and forefront,” Dowdy says. “But we also do not have an expectation that staff are putting their life on the line.”

She says it is ORL’s goal to ensure that RAs are facilitating a close-knit campus community in which students feel well-connected and care for each other.

“So far, that has not been a required component of Marquette employment, but typically, that’s been an ongoing conversation in professional development,” Dowdy says.

Dowdy says there is room left for conversation when it comes to preparing for active shooter situations on campus.

“Certainly, you don’t want to wait until something awful happens to realize there’s a hole in your system, or there’s another way to be able to approach this,” Dowdy says. “I’d encourage if there are any students who have concerns … I would welcome that conversation.”